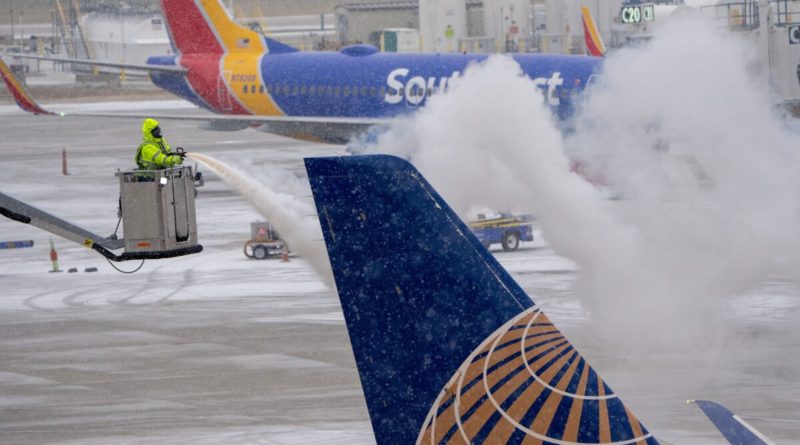 The extreme weather coincided with the start of a holiday travel season that could be one of the busiest ever.

More than 2,180 U.S. flights had been canceled Thursday and another 1,600 flights for Friday were scrapped, according to flight tracking website FlightAware.

The Federal Aviation Administration said Thursday that the winter storm was bringing blizzard conditions to the Midwest with major travel disruptions expected in Chicago, Detroit, and Minneapolis–St. Paul.

Delta Air Lines, which had cancelled 130 flights Thursday out of 4,400 and 84 on Friday per FlightAware, warned “additional cancelations will be necessary Friday as the storm continues to impact operations in Detroit and the Northeast.”

Amtrak said it was cancelling several dozen scheduled train trips in the Midwest through Christmas because of weather conditions including trains in Michigan, Illinois, Missouri, and trains between New York and Chicago.

In the seven days ending Wednesday, the Transportation Security Administration said it screened nearly 16.2 million passengers, slightly below the 16.5 million screened in the same period in 2019.

Last year’s holiday period was marred by an outbreak of COVID-19 among staff that forced airlines to cancel thousands of flights.

U.S. airlines, including Delta, United Airlines, and American Airlines, said earlier this week they were waiving change fees and fare differences for passengers in a range of affected areas.

American Airlines said on Wednesday it was continuing to monitor the winter storm, which is expected to affect Midwest, Northeast and East Coast airports this week, and had canceled 130 flights as of 4 p.m. ET.

By David Shepardson and Aishwarya Nair