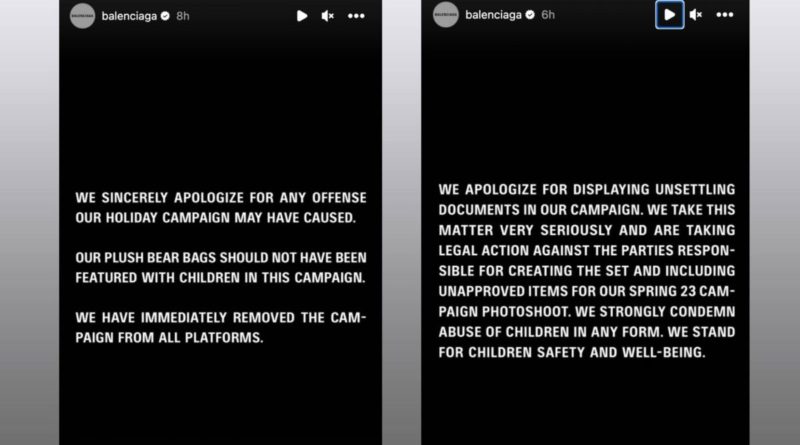 In a two-page summons (pdf) filed Friday in New York State Supreme Court for the County of New York, Balenciaga stated it was seeking redress for “extensive damages” that North Six and Des Jardins “caused in connection with an advertising campaign Balenciaga hired them to produce.”

Balenciaga took issue with campaign photographs that included court documents from a U.S. Supreme Court decision (United States v. Williams) about a law banning child pornography pandering. Specifically, a photo of a handbag, a Balenciaga and Adidas collaboration, included the court file that was partially covered by the bag. Only those who scrutinized the photo would have noticed the detail.

“Upon information and belief, Defendants, without Balenciaga’s knowledge or authorization, included certain documents in the campaign photographs, including an excerpt from a court decision upholding a criminal prohibition against child pornography,” the summons with notice reads. “Balenciaga believes that Defendants’ inexplicable acts and omissions were malevolent or, at the very least, extraordinarily reckless.”

It continued: “As a result of Defendants’ misconduct, members of the public, including the news media, have falsely and horrifically associated Balenciaga with the repulsive and deeply disturbing subject of the court decision. Defendants are liable to Balenciaga for all harm resulting from this false association.”

North Six and a representative for Des Jardins did not immediately respond to requests for comment.

Daily Mail reported that a Balenciaga spokesperson told the outlet the company was suing third-party creatives, not full-time employees or the photographers, who were reportedly hired specifically for that set.

Balenciaga has since apologized for the ad campaign in a statement posted on Nov. 22 to Instagram stories, which automatically expires after 24 hours. Demna Gvasalia, the company’s creative director also posted the statement to his Instagram page.

“We apologize for displaying unsettling documents in our campaign,” the company said. “We take this matter very seriously and are taking legal action against the parties responsible for creating the set and including unapproved items for our Spring 23 campaign photoshoot. We strongly condemn abuse of children in any form. We stand for children safety and well-being.”

In addition to the Spring 23, the luxury fashion house had faced strong backlash on social media over a separate ad campaign—called Balenciaga Objects—that featured a series of photos of young children with the company’s new diverse line of products such as homeware, pet accessories, scents, and ornaments.

On social media, many users expressed disapproval over the design of the bags, which are in the form of plush bears that have been styled in a manner that alluded to adult bondage fetish.

One photo showed a child holding a bag design of a white plush bear bag, with the bear wearing a black mesh shirt, a choker with a thick padlock around its neck, and black straps around its wrists and ankles. Another photo shows a different child model holding a purple plush bear bag that wears attire typically associated with the adult bondage fetish.

“We sincerely apologize for any offense our holiday campaign may have caused. Our plush bear bags should not have been featured with children in this campaign. We have immediately removed the campaign from all platforms,” Balenciaga said in a statement on Instagram, shared by Demna Gvasalia, the company’s creative director.

The images featuring child models and the plush bear bags appear to have since been erased from Balenciaga’s online sites and platforms.

The photographer of the ad campaign, Gabriele Galimberti, issued a statement on Instagram clarifying that he was not in control of the “direction of the campaign and the choice of the objects displayed.”

“I am not in a position to comment Balenciaga’s choices, but I must stress that I was not entitled in whatsoever manner to neither chose the products, nor the models, nor the combination of the same,” he wrote.

“As a photographer, I was only and solely requested to lit the given scene, and take the shots according to my signature style,” he added.

“Also, I have no connection with the photo where a Supreme Court document appears. That one was taken in another set by other people and was falsely associated with my photos.”

A Balenciaga spokesperson told Newsweek that it will stop selling the plush bear bags featured in the campaign.

Caden Pearson contributed to this report.

Mimi Nguyen Ly covers world news with a focus on U.S. news. Contact her at mimi.nl@epochtimes.com

How to Create a Solid Resumé

3 Retirement Savings Options for the Self-Employed