In the 18th century, the average French working man spent about 50 percent of his wages on bread. By 1789, that percentage had increased to as much as 60 to 80 percent and the French Revolution ensued. King Louis XVI and Marie Anoinette met the guillotine.

In 1930, a little-known Indian attorney named Mohandas Gandhi began protesting a steep “Salt Tax” that was imposed by the British imperialists who ruled India and maintained a monopoly over the country’s salt production. By the time he had finished his march to the sea so that he and his followers could produce their own salt, some 60,000 Indians were jailed, but Gandhi had earned the support of millions.  By 1947, Gandhi and his followers had forced Britain to relinquish the crown jewel of its overseas empire and Gandhi had become a political and cultural icon.

Food—or a lack of it—won’t necessarily cause a revolution. But it can certainly mobilize revolutionaries. And governments, businesses, and citizens should pay attention when its production is imperiled.

Right now, food production and crop yields are in danger. We need to pay attention, immediately, and brace for the consequences.

The Basis of the Problem

Such a situation is at hand.

According to the Diesel Technology Forum, “Diesel engines power more than two-thirds of all farm equipment, transport 90 percent of its product, and pump one-fifth of its water in the United States. Ninety-six percent of the large trucks that move agricultural commodities to railheads and warehouses are powered by a diesel engine. One hundred percent of the freight locomotives, marine river grain barges, and ocean-going vessels that deliver these products to markets at home and abroad are powered by diesel.”

The price of diesel fuel across all regions of the United States has spiked more than 50 percent since March. 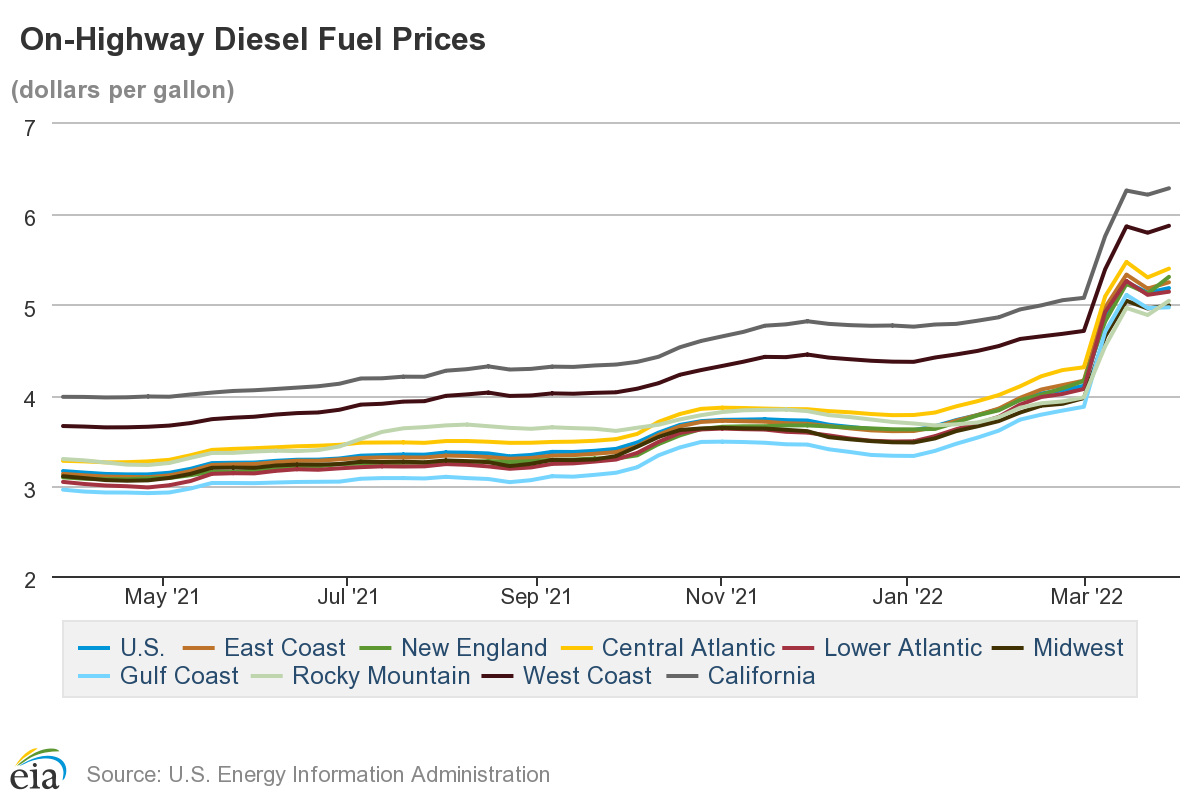 Abroad, diesel is similarly expensive in most countries, save for some of the few oil-producing nations.

The shortage of fertilizer is even more pronounced, and will have even broader implications. According to the World Bank (pdf), “Fertilizer is credited with increasing global yields of food crops by 40–60%, and no region has been able to boost agricultural growth without increasing its use.”

But the fertilizer price index doubled from an already record high of 100 in January 2021 to 200 this past January.  Things are likely to grow worse as Russia—the largest producer of fertilizers in the world—“recommended” its Russian producers’ end exports.

In Iowa, some farmers are unable to locate fertilizer supply and fear the shortage may result in significantly reduced corn crop yields. On this chart of Corn Futures, prices are at near record high.

Futures in soybeans are similarly escalating to near-record levels.  Some are looking at altering their planting cycles to plant soybeans–which do not require fertilizer–but that would cause many to plant soybeans in two consecutive years so that yields are reduced.

As some farmers search for alternatives, a number of start-ups are exploring alternative technologies that act like fertilizer. One technology that could be helpful is “green” processing of Urea fertilizer. (This would be  especially helpful in India where Urea is the principal agricultural fertilizer.) But it seems unlikely those start-ups can meet the world’s demand or at a price that would be a viable commercial substitute for traditional fertilizer.

With nearly 50 percent of corn used for animal feed and spring planting season just weeks away, Americans should anticipate higher prices for corn this summer, and animal proteins in the fourth quarter and through at least the first half of 2023.

Of course, all this looming agricultural bad news is exacerbated by the Ukraine/Russia War.  According to National Geographic, the two warring nations produce 30 percent of the world’s wheat and 12 percent of the world’s calories.  Much of that production goes to the Middle East, where the political situation is already unstable.

It does not appear that governments, including the U.S. government, are in any fashion prepared for—or even aware—of the looming challenges to agriculture. Policymakers globally need to address the likelihood of food shortages and price hikes with specific, actionable, proposals to meet what is ahead.

But the responses are nebulous at best.  For example, the World Bank exhorts to “maintain food trade,” “safety nets,” “support farmers,” and “transform food systems to be more resilient” are long on objectives but short on means.  The Center for Strategic and International Studies, the bipartisan non-profit think tank, meanwhile, seems to acknowledge food insecurity but proposes no initiatives beyond continuing to buy Russian grains.  The White House has budgeted a quarter billion dollars for a “new grant program this summer to support independent, innovative, and sustainable American fertilizer production to supply American farmers.”

But there seems to be little or no action on the looming crisis in Congress.  It’s fallen to a state house legislator, Rep. Steve Carra, a member of the Michigan State House, to offer a bill  in that state’s legislature that urges “the U.S. Congress, federal agencies, and state departments to address the ongoing fertilizer price increases and shortages that are impacting Michigan farmers.”

A more robust response, at least in the United States, would hopefully include more thoughtful policymaking. Some possible initiatives might include:

The world faces higher food prices, food shortages, and even possibly famine in some areas of the world. All those situations have second-order effects that could alter other supply lines and geopolitical effects.

We face a global challenge that should be at the forefront of the agenda of the G-20 and international organizations and on the legislative calendars of each country’s leadership.  With the spring corn planting season just weeks away, urgent action is required.

UK Bans All Ships With Russian Links From British Ports

Is Trust or Innovation More Important for a Brand in 2021?