Tesla CEO Elon Musk is now in charge of social media platform Twitter, according to CNBC. The official announcement of the takeover deal is expected to come on Friday before the opening of the stock market.

Twitter will now be delisted from the New York Stock Exchange beginning on Oct. 28, according to a recent delisting notice.

Musk shared a video of himself on Wednesday walking into Twitter headquarters carrying a sink, tweeting “let that sink in.” He also changed his social network bio to “Chief Twit.”

Before Musk arrived at the San Francisco-based headquarters, CNN obtained an email that was sent to all staff members.

“As you’ll soon see or hear, Elon is in the SF office this week meeting with folks, walking the halls, and continuing to dive in on the important work you all do. If you’re in SF and see him around, say hi! For everyone else, this is just the beginning of many meetings and conversations with Elon, and you’ll all hear directly from him on Friday.”

But the celebratory nature after a seven-month battle between the billionaire entrepreneur and the social media corporation might end prematurely as “he’ll still have plenty of hard work ahead,” says Jason Moser, senior analyst and lead advisor at The Motley Fool.

The buyout will be remembered as one of the most crucial deals in the history of mergers and acquisitions because of how much public attention it drew.

The entire ordeal began earlier this year when it was discovered that Musk purchased a sizable stake in the company to become the largest shareholder. He was invited to serve as a member of the board of directors, which he eventually declined. Instead, the billionaire CEO proposed to purchase the company for $44 billion, or $54.20 per share.

The price offered by Musk represented a 38 percent premium to the company’s closing stock price on April 1. This was the final trading session before Musk revealed his roughly 9 percent stake in the company. Some had thought the figure was too expensive, especially considering that he faced zero competition.

“My strong intuitive sense is that having a public platform that is maximally trusted and broadly inclusive is extremely important to the future of civilization,” Musk said at the TED2022 Conference in Vancouver in April. “I don’t care about the economics at all.”

The social media outlet eventually agreed to the takeover bid, but Musk attempted to abandon the deal over his concerns regarding the prevalence of bots and fake accounts. He believed that the number of spam bots was greater than the 5 percent Twitter disclosed. Twitter filed a lawsuit against Musk to force him to make good on his acquisition.

Earlier this month, Musk changed his mind, confirming in a letter to Twitter that he will move ahead with his original offer. The surprise reversal occurred just weeks before both parties were scheduled to appear in a Delaware Chancery Court. Many legal experts purported that it would have been difficult for Musk to win the case.

Musk had recently addressed the Twitter situation during a third-quarter Tesla earnings call, saying that he is “excited.”

“I think it’s an asset that has just sort of languished for a long time, but has incredible potential, although obviously myself and the other investors are overpaying for Twitter right now,” he added.

So, now that Musk is in control and not beholden to anyone, can he turn around the struggling website?

Last week, The Washington Post reported that Musk plans to lay off 75 percent of Twitter’s workforce. By doing more with less, it would indicate stronger cash flow and greater profitability, market analysts say. It might also be a remedy to its stagnating revenue growth troubles and bloated corporate cost structure.

“While there’s no question that Musk possesses a unique skill set and likely has some great ideas to improve the platform, it also seems that there are no quick fixes given the challenges the company and the service face today,” Moser told The Epoch Times.

However, Bloomberg reported that Musk denied previous reports, saying that he does not intend to cut 75 percent of staff.

Musk could also face some opposition as he has become the target of left-wing organizations since his takeover plans were reported. Media reports revealed that “George Soros, Clinton and Obama staffers, and European governments” were behind the campaign that urged big corporations to boycott Twitter after Musk’s acquisition.

Critics suggest that Musk’s concept of supporting and bolstering free speech on the “de-facto town square” by buying the company will result in hate speech and the spread of misinformation.

Market experts have noted that advertisers might have concerns about where Twitter is heading under Musk’s control. But he attempted to assuage worries in a message posted to Twitter with the words “Dear Twitter Advertisers.” Musk pushed back against claims the website would be inundated with misinformation and hate speech as he plans to reduce content moderation. He agreed that “Twitter obviously cannot become a free-for-all hellscape, where anything can be said with no consequences!”

“The reason I acquired Twitter is because it is important to the future of civilization to have a common digital town square, where a wide range of beliefs can be debated in a healthy manner, without resorting to violence,” he wrote. “There is currently great danger that social media will splinter into far right wing and far left wing echo chambers that generate more hate and divide our society.”

He added that he didn’t buy Twitter “to make more money. I did it to try to help humanity, whom I love.”

Media outlets also reported last week that the Biden administration was contemplating national security reviews for Musk’s ventures, including the Twitter acquisition. The White House, however, has denied those allegations.

Andrew Moran has been writing about business, economics, and finance for more than a decade. He is the author of “The War on Cash.” 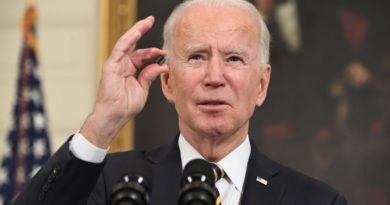 To Beat Inflation, Republicans Must First Beat Democrats and ‘Stop as Much of Biden Spending as We Can’: Trump Economic Adviser