A TikTok executive recently told the UK Parliament that while users’ personal data collected by the app can be remotely accessed in China, the company would never provide the data to the Chinese Communist Party (CCP).

However, it appears the reassurance has done little to ease the concerns around the social media giant and its Beijing-based, Cayman Islands-incorporated parent company ByteDance.

The UK’s Security Minister Tom Tugendhat on Tuesday said the Chinese regime, among other foreign states, has “considerable sway over the algorithms,” warning the app is a powerful tool to push false narratives.

It comes as the U.S. Senate voted unanimously on Wednesday to pass legislation aimed at banning TikTok on government devices, following a string of state-wide bans.

The Epoch Times spoke to China expert Megan Prangley and defence and tech expert Arthur Herman, who both said the UK can’t trust TikTok to keep its user data from the communist authorities in Beijing.

TikTok in November updated its Privacy Policy, revealing that certain entities within its corporate group in countries, including China, have remote access to European TikTok users’ personal data.

Kanter said TikTok is a “a global company with a global leadership team” that is separate from ByteDance’s China-based subsidiary Douyin, whose employees do not have access to TikTok UK users’ personal data.

She also said the company had not been asked for TikTok UK user data by the CCP, had not provided such data, and “would not to so if asked.”

‘No Reason’ to Trust

Prangley, communications and policy officer and China commentator at the Henry Jackson Society, said she did not find Kanter’s letter reassuring.

First, ByteDance “has an internal CCP committee,” she said, adding that with 9.7 million CCP members in China, it’s “highly likely” that a China-based employee can access the data and streamline it to the government.

Asked about the safeguard measures TikTok said are taken around data access, including having a U.S. team to oversee the process, Prangley said the fact that the app is being banned on government devices in the United States shows that U.S. government officials and security officials “don’t trust that either.”

Apart from government devices, the app has also been banned by the U.S. military in 2020 over cybersecurity risks.

Prangley said the technical language in the company’s new privacy policy is “very broad,” and would need to be “much more detailed to make it clear how that process works.”

Citing a Forbes report that alleged ByteDance had planned to monitor some specific American citizens location using TikTok, Prangley said that’s “the reality that you would not want to happen then in the UK.”

She also referenced China’s National Intelligence Law, which requires all organisations and citizens to “support, assist, and cooperate with national intelligence efforts.”

“This is just where you cannot trust the Chinese government,” Prangley said, adding employees could be “coerced into sharing whatever particular piece of information will be desired at the given time.”

TikTok and ByteDance’s track record show they “will do whatever the Chinese government orders them to do” and there is “no reason to trust them, no reason to believe any of those assurances.”

Having written extensively on TikTok and Chinese telecommunication giant Huawei, Herman said the relationships between these companies, their executives, their operations, and the CCP are “exactly the same.”

“They are joined together at the hip. And to suggest that they’re not or that there’s some sort of wall of separation between its global operations and what political masters demand or expect … that’s deception on their [part] and naive thinking on our part.”

In the United States, TikTok has long been the subject of congressional scrutiny over its ties to the CCP and its practice of sending user data to ByteDance employees located in China.

Security experts have described TikTok as a “weaponized” application for this reason and have said that the app siphons an immense amount of data from Americans that could be sent to the CCP. Such data include not only browsing history, but also facial recognition information, keystroke input, passwords, bank information, and even whatever users have copied to their virtual clipboard.

Commenting on the enormous amount of data on U.S. users that TikTok hoovers up, Herman said information such as users’ contacts, locations, and preferences may not be interesting to Chinese military or intelligence on their own, but when these data are fed into artificial intelligence algorithms, they become “parts of pieces of a much larger picture of where America vulnerabilities lie.”

FBI Director Christopher Wray has repeatedly said TikTok is a national security threat to the United States and that, among other concerns, ByteDance’s control of the app’s algorithm makes it vulnerable to CCP manipulation.

“The degree to which they’re able to add or manipulate those preferences in order to shape the thinking, the understanding of their users … When you think about this, then really it’s not just as a social media app but as a brainwashing app,” he said, adding that the curation includes leaving out content such as the treatment of the Uyghur people in China, the Great Leap Forward and the Great Famine, and the Cultural Revolution.

TikTok executives previously admitted to censoring information on the app, suppressing videos that were critical of the CCP or that discussed the regime’s atrocities in Xinjiang and Tiananmen Square.

When asked for a reason, executives have typically responded by saying that the platform isn’t intended for political content. That answer is problematic, however, given that the company failed to act on 90 percent of its ads containing election misinformation that targeted the U.S. 2022 midterm elections, including content spreading outright lies about the voting process in the United States.

Acknowledging that censorship and bias also present problems on other social media platforms, Herman said it “doesn’t detract from the fact” that TikTok “is doing this manipulation and that it’s collecting the data,” adding that the manipulation and data collection cannot be viewed separately.

The major issue, he stressed, is that China is “an adversary” with a “totalitarian government.”

“We’re talking about a country which means us harm and which means to break and pull apart the alliances that hold the United States and Britain and NATO together, who see this as part of their larger strategic picture,” he said.

“And to have such a social media platform. It’s controlled by an adversary, it’s owned by an adversary, maintained by engineers who work for that adversary and is collecting data for use by that adversary’s military and intelligence services. We’ve got a big problem.” he said, adding people should demand the both the White House and Westminster “do something about it.”

The Trump administration previously attempted to ban TikTok from operating in the United States, but the order was revoked by President Joe Biden, who ordered a review instead. Herman previously criticised the decision, saying it was a “mistake.”

Referencing the influence the Chinese regime wielded in Africa, Latin America, and the Middle East, Prangley said: “Money is power. If China has the upper hand in that, whether it’s trade, whether it’s selling ‘Made in China’ products everywhere, I think that’s where the threat for the West lies.”

Andrew Thornebrooke contributed to this report.

Carlyle to Buy US Defense Contractor ManTech for $3.9 Billion 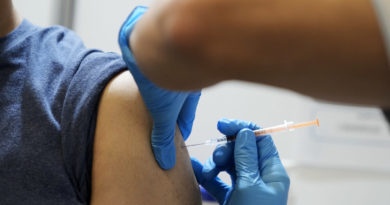