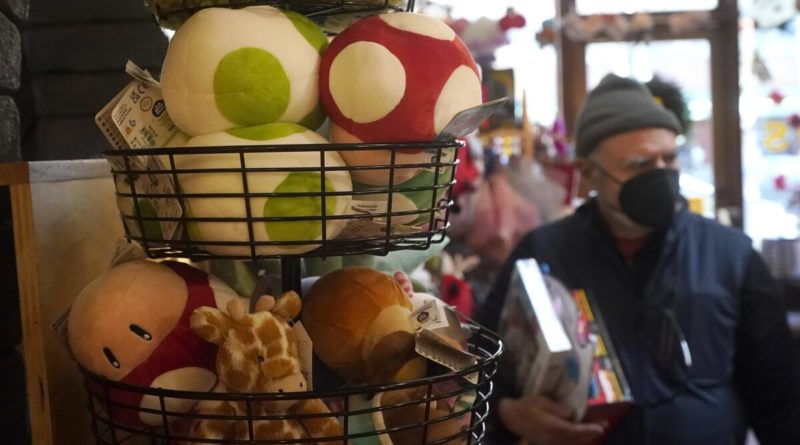 
NEW YORK—The free-wheeling holiday shopper of 2021, happy to spend money to relieve some pent-up pandemic demand, has given way to a more practical consumer this year, many small business owners say.

Stephanie Sala felt last year had a YOLO, or “you only live once,” feel to it. People were splurging—spending $250 on a giant stuffed avocado, for example—at her eight Five Little Monkeys toy stores around the Bay Area in California. This year, the purchases are more low-key: Legos, Pokemon and anything mushroom-related are popular toys.

Sala says Five Little Monkeys probably won’t reach the same level of sales as last December but believes “we’ll still be well ahead of 2019.” That’s crucial for her because the last seven days leading up to Christmas account for 10 percent of annual sales.

In some ways, the bustling holiday shopping season feels like a return to pre-pandemic days: More people are out and about, shopping in groups and buying for themselves as well as gifts for friends and family. And there’s plenty of merchandise to select from because the supply chain snags that plagued last Christmas have largely subsided.

But small retailers say this year is still far from “normal” because decades-high inflation is forcing them to raise prices and making shoppers rein in the uninhibited spending seen in 2021 when they were flush with pandemic aid or gains from the stock market. Fifty-seven percent of U.S. adults say it has been harder to afford the things they want to give, a dramatic increase from 40 percent one year ago, according to a poll from The Associated Press-NORC Center for Public Affairs Research.

The season did get off to a relatively strong start. Mastercard SpendingPulse, which tracks spending across all types of payments including cash and credit card, said that overall sales on Black Friday rose 12 percent from the year-ago, although that isn’t adjusted for inflation. Sensormatic Solutions, which tracks store traffic, said the number of shoppers was up 2.9 percent on Black Friday compared with a year ago.

“This year is much more ‘ordinary,’ which means pulling out all the stops to make sales goals,” said Nathan Waldon, who owns Nathan & Co., two gift shops in Oakland, California.

Higher costs are having an effect. The wholesale prices for the Paddywax candles Waldon sells have increased 20 percent to 40 percent across the line. He’s charging $34 for candles he sold for $28 a year ago. The price increases “slow the rate of sale and it also cuts into our margins,” he said.

Waldon makes up about one-third of his annual revenue during the period between Thanksgiving and Christmas. He says it will be hard to beat last year’s holiday sales numbers, when shoppers came out in droves early to secure must-have items and splurged due to demand that built up during the pandemic.

“I feel like a little hamster on a treadmill,” he said. “We’re definitely chasing after those numbers.”

Waldon is not alone. According to a survey from Goldman Sachs 10,000 Small Businesses Voices, 52 percent of small businesses say their profitability this holiday season is not meeting expectations compared to last year. Smaller companies can’t offer the discounts that bigger chains do. Eighty four percent of small businesses said they think bigger retailers have a competitive advantage due to their ability to better withstand inflationary pressures and offer lower prices.

“They feel like they’re being squeezed by higher costs for labor and inventory and the cumulative impact is making it much more difficult to make a profit, despite the fact that 79 percent said they have raised prices compared to last year,” said Joe Wall, National Director of Goldman Sachs 10,000 Small Businesses Voices.

Inflation is also a factor in decisions made by shoppers at Society Boutiques shops owned by Tanya Noegel outside of Atlanta and in Columbus, Wisconsin. At her four boutiques, which sell women’s clothing and accessories, she had a record number of holiday shoppers during the Black Friday weekend, including regular customers she hadn’t seen during the pandemic. But habits have changed as shoppers worry about inflation and the possibility of recession.

“Customers tell us they want to purchase multiple items, as they’ve done in the past, but are purposefully making smaller purchases and looking for discounts and promotions when making those purchases,” Noegel said.

Sweaters, puffer vests, and blouses are popular items so far this year. Wholesale apparel prices are up 5 percent and she’s had to increase wages company-wide by almost 30 percent in order to retain and hire staff.

“That to me, as a small business, is a big number,” she said. “My profit margins are down from last year and my payroll costs are much higher.”

Still, she’s happy how things are going so far this holiday season all things considered.

“All in all, we’re very pleased with our numbers this year and we’re expecting good things throughout the rest of the holiday shopping season,” she said.

Some small businesses are benefiting from changes they made to try to stay afloat during the pandemic. They’ve expanded their online business, become more efficient and found other ways to bring in money.

During the pandemic Peter Makin, owner of Brilliant Books bookstore in Traverse City, Michigan, created or expanded other revenue streams such as a book subscription service, holiday-themed boxes of books, and providing book fairs for local schools. Meanwhile, print book unit sales jumped 8 percent in 2020 and 9 percent in 2021, according to NPD Bookscan.

That’s helped him contend with higher book prices—which are set by publishing houses, not bookstores. Paperbacks have gone from $15 to $18 or more, and hardcovers have gone from $25 to as much as $40.

“Expenses have increased just as much as business has increased the last two years,” he said.

“It makes us fairly level. I think the reason spending is slightly less is the economy—people don’t feel they’ve got as much money,” he said.