Price growth slowed its pace in April, with a key inflation gauge falling to a level well below analysts’ forecasts and fueling hopes that price pressures may be starting to dissipate.

The Commerce Department reported on May 27 that the headline Personal Consumption Expenditures (PCE) price index, which is the inflation measure most closely watched by the Federal Reserve, rose by a monthly 0.2 percent in April, down from a blistering 0.9 percent pace of growth in March.

Analysts expected the monthly inflation gauge to show prices growing by 0.8 percent, with the fourfold slower pace coming as a welcome surprise.

So-called core PCE, which strips out the volatile categories of food and energy and is considered a better gauge of underlying price pressures, also slowed its year-over-year pace in April, though the month-over-month reading remained unchanged.

“Core PCE price momentum probably peaked already earlier this year and we are now starting to see it in the market pricing of the Fed,” macroeconomic expert Andreas Larsen said in a tweet.

Eric Basmajian of EPB Macro Research said in a post on Twitter that market expectations have fallen for how high the Federal Reserve will hike rates in the current tightening cycle in order to tame surging prices.

“The peak should keep moving closer and lower as economic conditions start taking this ‘second leg’ lower…,” he added.

The Fed is getting their “curl” lower in core inflation but the “level” is still too high. pic.twitter.com/HIKWpM9gKr

Market expectations as measured by Fed funds rate futures contracts give a near 90 percent chance for the central bank to hike rates to a level in the range of 2.5-2.75 percent by the end of 2022.

The annualized pace of PCE inflation came in at 6.3 percent in April, according to Friday’s Commerce Department data, reflecting a drop from 6.6 percent price growth in March and slightly below economists’ forecasts. The slowdown in the year-over-year growth rate is the first decline in the measure since November 2020.

While both the monthly and annualized data suggest an easing of price pressures, the year-over-year reading is still over three times higher than the Fed’s target of around 2 percent.

Friday’s data also showed strength in consumer spending, which rose by a more-than-expected 0.9 percent in April, while March numbers were revised higher to show a 1.4 percent gain from the previously reported 1.1 percent.

“If the consumer is able to keep spending and the prior number was revised up, that’s good news,” said Robert Pavlik, senior portfolio manager at Dakota Wealth in Fairfield, Connecticut.

Consumer spending is a key driver of the U.S. economy, accounting for around two-thirds of output.

Wall Street’s main indexes closed sharply higher on Thursday after some optimistic retail earnings outlook and less-hawkish minutes from the Fed’s recent policy meeting brought back buyers into the market on waning investor concerns about the likelihood of aggressive rate hikes.

“Right now it’s just a rally in a bear market … the market has just got extremely oversold and people are looking for bargains,” Pavlik said, referring to how equity markets fared on Thursday. 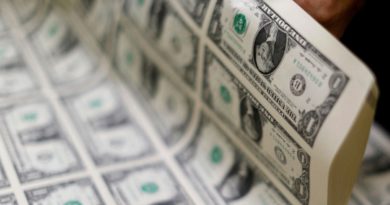