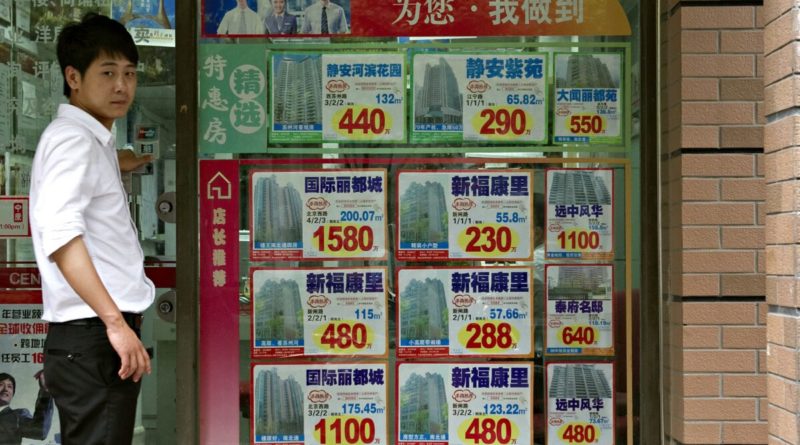 
In the face of the economic downturn and China’s tough anti-COVID campaign, Chinese wealthy people are scrambling to flee the country, selling their luxury homes in Shanghai and other first-tier cities at steep discounts and cutting their shares in listed companies to cash out.

According to Shanghai property media, since October, local secondhand luxury properties plunged into a wave of listing-for-sale: deals of more than $3.5 million continued to rise, reaching the highest sales in October, with 28 units sold in the week from Oct. 31 to Nov. 6.

On the South Zhongshan Road and the Bund, areas notable as “Oriental Wall Street,” luxury houses for sale under the agency Greentown Huangpu Bay have recently increased by about 30 percent compared to months prior.

In the Pudong district, a financial and business hub in Shanghai, of 4,000 households in Shimao Binjiang Garden, 5 percent, or 200 sets are for sale.

Real estate insider Zhou Ning told Radio Free Asia on Oct. 25 that a large number of wealthy people, including foreign businessmen, are eager to leave and are selling their assets in China, even at reduced prices. She said some of her friends recently bought hotels and restaurants that were sold by the Taiwanese.

Zhou believes the move is driven by people’s insecurity, a sentiment due to the Chinese Communist Party’s unstable and harsh political environment.

With the increase in the number of properties for sale, the price of luxury homes began to dive.

On Nov. 2, the auction for the Delin apartment, a landmark ancient building in Hongkou district, was bid at a price of 561 million yuan ($80.8 million), equivalent to a 20 percent discount from the appraised market price of 701 million yuan ($101 million).

Shanghai is not alone, Beijing, Wuhan, Shenzhen, Guangzhou, and other first-tier cities of luxury homes are also selling at reduced prices.

In late October, a set of residential units costing 14.9 million yuan ($2.13 million) in Shenzhen Huarun City listed for sale for more than a month, finally settled in a deal with 13 million yuan ($1.86 million), the price fell back to that of 2019.

A 107-square-foot, two-room unit in the business district of Zhujiang New City in Guangzhou was listed for two months in early November, dropping by more than 2 million yuan ($280,000) compared to the same unit in March 2021.

Shareholders Reduce Holdings to Cash Out

Accompanying luxury property discount sales, shareholders and executives of many listed companies in China are selling their shares to secure more funds with them.

According to the state-owned Economic Information Daily, in 2022, more than 60 shareholders of at least 30 companies received regulatory fines for “non-compliant shareholding cuts.”

Shanghai real estate professional Zhao Ting told Radio Free Asia on Oct. 25 that many luxury homeowners no longer have any illusions about the future after the closing of the Congress, and have decided to sell their homes at reduced prices.

A significant number of wealthy Chinese prefer to buy homes in the United States after fleeing China.

The International Transaction U.S. Residential Real Estate 2022, a recent report released by the National Association of Realtors, said that Chinese buyers purchased $6.1 billion of real estate in the United States over the past 12 months, maintaining the first position for foreign buyer transactions and continuing a trend that has been in place since 2013.

Roughly 58 percent of Chinese buyers were in all-cash transactions. The average transaction price was more than $1 million, with 31 percent of them purchasing in California, and New York is another key target area for their real estate purchases, the report said.

David Lesperance, a European lawyer who has worked with wealthy families in Hong Kong and China, told the Financial Times on Oct. 25 that many of his clients have been preparing to leave China for years, including transferring assets legally to safe offshore jurisdictions and arranging for their families to obtain new nationality and residence outside China.

He said wealthy Chinese are worried about the new-term government that would erode their wealth and possessions through the high-tax system after the so-called commonwealth strategy; moreover, they are increasingly worried about life safety.

Henley & Partners, a London-based investment immigration advisory firm, estimates that about 10,000 millionaires will move out of China in 2022, taking with them about $4.8 million per person, for a total withdrawal of $48 billion from China, the second-largest exodus worldwide after the exodus of Russian tycoons.

Why Local Marketing Still Matters in the Digital Age

Closing Prices for Crude Oil, Gold and Other Commodities (Nov. 18)

Has the Big Tech Bubble Burst?