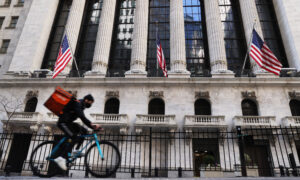 WASHINGTON—Rising bond yields caused a market panic recently and sparked a sell-off in the stock market. While yields are still at historically low levels, investors worry that a sharp move in yields could be a sign of trouble.

The technology sector has been the biggest beneficiary of artificially low rates in recent years and the spike in Treasury yields has hit technology shares especially hard.

The tech-heavy Nasdaq 100, for example, fell more than 10 percent between Feb. 12 and March 8 before it started to recover in recent weeks. The index is dominated by America’s most innovative companies including Apple, Google, Intel, and Tesla.

After its peak on Jan. 26, Tesla’s share price plunged more than 30 percent in March.

The cheap money provided by the Federal Reserve in response to the pandemic has inflated asset prices and created an “enormous bubble,” according to Daniel Oliver, founder of Myrmikan Capital and director at the Committee for Monetary Research and Education, a nonprofit educational organization on the monetary system.

“Every asset—be it Tesla, Bitcoin, NASDAQ, or housing prices—they’ve all gone crazy because rates are so low,” he told The Epoch Times.

The whole financial system can blow up if the rates go higher as in the savings and loan crisis of the 1980s and 1990s, according to Oliver.

If the yields continue to rise, companies get squeezed, he said, because they would have a higher cost of capital to fund their businesses.

A rise in yields also pushes mortgage rates higher, which would make housing less affordable and depress the housing market. With lower housing prices, most Americans would feel squeezed, because the majority of their wealth is tied up in their houses, he added.

In addition, “the banks blow up, because they have only term loans that are fixed interest rates, and the money they would have spent to raise capital, either from deposits or from the bond market, goes up. And that squeezes their margins. So then everyone starts to go broke,” Oliver said.

The economic crisis caused by the pandemic and the lockdown measures has prompted governments to take strong fiscal and monetary measures that have contributed to the rise in asset prices.

A survey by Deutsche Bank in January found that the vast majority of investors (89 percent) believe some assets, including bitcoin and U.S. tech stocks, are in bubble territory.

To support the markets, the Fed has been buying at least $80 billion per month in Treasuries and $40 billion in mortgage-backed securities since June 2020.

“What we are basically seeing right now is that the economy is so leveraged, and it’s so exposed to the increase in debt globally, that central banks simply cannot tolerate a very, very small move in bond yields,” Lacalle said.

The depressed bond yields and lower incomes encouraged households and corporates to borrow more. As a result, vulnerabilities associated with business and household debt soared in 2020, according to the Fed’s monetary policy report released in February.

“Business debt has risen from levels that were already elevated before the outbreak of the pandemic. Business leverage now stands near historical highs,” the report stated.

Economists believe a continued rise in bond yields could prompt the U.S. central to buy more bonds to maintain low rates and protect heavily indebted banks and corporates from failing.

“The only way the Fed can prevent [a crisis] from happening, is by printing more and more money to bid on bonds, to bid on assets to keep rates low. So that’s the danger,” Oliver said.

“That’s been the policy response for the last 40 years,” he noted. “Every time they do this, it’s not a free lunch. The economy gets more and more focused on malinvestments.”

Tiffany Is Selling Its Most Expensive Piece of Jewelry Yet

How Businesses Are Responding to High Inflation