We live in the midst of the great unraveling, a time so disorienting that it becomes difficult to keep up much less describe and interpret events all around us. We tend rather to be bounced from data point to data point—high prices, learning loss among kids, falling income, increased population, the normalization of crime, the corruption of the media—without seeing the bigger picture much less having an explanation for why all this seems to have happened to us.

Here I would like to offer a hermeneutical key. Think of what has happened as a big swindle, perhaps the biggest in American history. It’s all about the transfer of wealth from the poor and middle class to the rich, from small businesses to large ones, from the people to the government. We are talking trillions of dollars here, all of it quantifiable and visible in the suggestive charts below.

To review the history briefly, governments at all levels in mid-March 2020 locked down life and especially economic life, and Congress within a few weeks passed a spending package worth $1.8 trillion. Implausibly and very unexpectedly, government became everyone’s benefactor, dropping many thousands of dollars directly into the bank accounts of U.S. individuals, families, and businesses. It all seems suspiciously benevolent.

Such spending continued for two years and so did the “stimulus” checks, in three rounds. All the way, Congress was relying on debt finance. This is a trick they can get away with but you cannot thanks only to the power of the Federal Reserve to create money and credit out of thin air. This is precisely what they did. Totalling it all up—the Congressional spending plus outright money creation as measured by M2—we get nearly a dollar-for-dollar match of $6 trillion over two years.

What are the consequences of that? Depending on where the money lands, it creates tremendous economic distortions. If the money is dropped as if from a helicopter, and it was in this case, you get the crudest form of monetary debasement. The purchasing of power of existing dollars declines in proportion to new money created in excess of the production. This is precisely what happened. We now have inflation running somewhere between 8.6 percent and 12 percent depending on what data you want to check.

The new money can create the appearance of an economic boom but it masks underlying destruction of wages and salaries. In real terms—income adjusted for the decline in the power of that income to buy things—our standard of living declines even in the midst of a boom. Overall productivity can also be expressed in real terms. It means nothing if the economy is “growing” by 3 percent if the value of the dollar is declining by 5 percent. To get a picture of reality, we need to look at increases in money printing against the productivity adjusted for changes in purchasing power.

The chart below charts M2 against real GDP from 1965 to the present. What we see here is rather alarming. It not only reveals just how unprecedented are the times. It also shows that the recent explosion of money in fact created very little bang for the buck. In real terms the rate of growth plummeted, then shot up but not nearly as much as one might expect, and then fell again. One more drop on this scale and the recession will be declared. 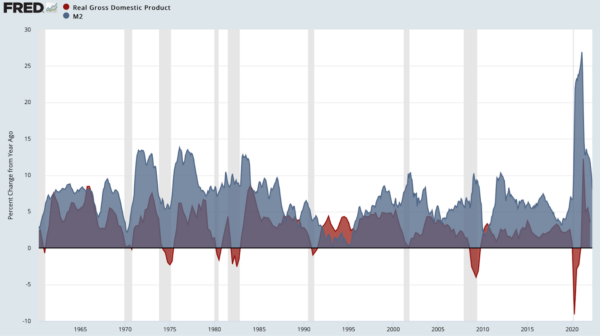 This also suggests that in real terms, productivity has a long way to fall in order to correct for the false boom and respond to the possibility of more Fed tightening. Now, it’s true that the Fed might reverse course and decide to add more blue in order to boost the red, but at this point, it seems unlikely to cause the intended result. Whatever course the Fed chooses, it seems that a severe stagflation (inflation plus recession) will be the result.

So here we see swindle number one: money printing was substituted for genuine productivity and created the brief appearance of recovery without the reality.

What was the effect of this on household finance? Here we get to the truly insidious part of the story. Money appeared like magic in bank accounts all over the country. A third of the workforce had gotten used to languishing at home, pretending to work. Students started Zooming instead of learning. Adults who had spent a lifetime embracing the normal disutilities of labor gained for the first time a vision of a life of luxury without work.

One result was a huge boom in personal savings, if only for a brief time. Some of the money was spent on Amazon, streaming services, and food delivery but also much of it landed in bank accounts as people started saving money as never before, most likely because the opportunities to spend on entertainment and travel dried up. Personal savings soared to over 30 percent. It felt like we were all rich!

That feeling could not last. Once the economy opened up again, and people were ready to get out and spend their new riches, a strange new reality presented itself. The money they thought they had was worth far less. Also there were strange shortages in goods they once took for granted. Their new riches turned into vapor in a matter of months, with each month worse than the previous month.

As a result, people had to deplete their savings and turn to debt finance just to keep up with the decline in purchasing power, even as their income in real terms turned dramatically south. In other words, government took away what it gave. The seeming generosity of our masters in D.C. turned out to be swindle number two. 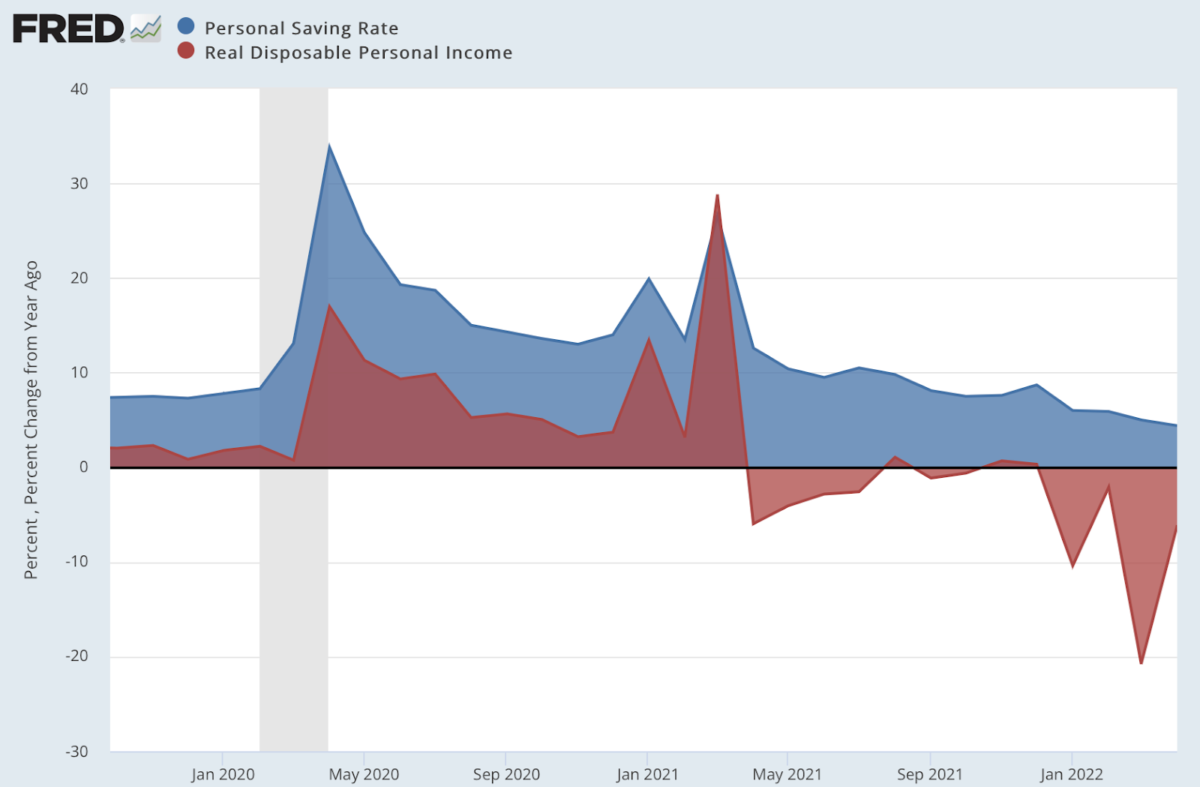 The scale of the wealth transfers here truly boggles the mind and it is not easy to quantify. But let’s try the following. Let’s consider the increase in national income over two years adjusted for how much inflation has robbed the public of purchasing power. What do we come up with? Right now, the total amount of thievery is priced at $3.1 trillion. This is sheer robbery from the poor and middle class to government and its connected interest groups among which were the large business and tech companies that made out like bandits.

Keep in mind that this process is far from over. The conditions have been established to transfer many trillions more. If we wanted to make fiscal and monetary poetry out of it, the total transfer will in two years equal the exact amount that Congress spent on covid aid and what the Fed printed to cover it: $6 trillion. In other words, we are only halfway there.

Were we tricked? You had better believe it. It was the biggest and most egregious swindle in American history as measured by scale. Do people understand this? Maybe a bit, if only intuitively. As time goes on, it will become more obvious what has happened to us. Then the question will become: who bears the blame and what should we do about it?

Jeffrey Tucker is founder and president of the Brownstone Institute. He is the author of five books, including “Right-Wing Collectivism: The Other Threat to Liberty.”