As Democrats have become ever-more the party of the hard left they have simultaneously become the party of the easy lie. On Wednesday, President Joe Biden claimed that Republicans’ determination to rein in the massive, automatic entitlements hurtling toward bankruptcy will “make inflation worse.” This from a president who signed a nearly $400 billion green spending bill with over $450 billion in tax increases that is laughably called the “Inflation Reduction Act,” while now accusing Republicans of “lying like the devil.”

A key feature of that law is its complex new 15 percent alternative minimum tax that would add both to companies’ tax burdens and to their compliance workload. As has so often been the case in the past, what the effects will be can’t even be discerned with any confidence based on the actual wording of the statute. According to the Houston-based international law firm of Vinson & Elkins, the new corporate Alternative Minimum Tax’s (AMT) application “in certain contexts is not entirely clear and, absent further regulatory guidance, may apply with respect to certain corporate taxpayers that Congress did not intend to capture.”

In other words, a Democrat Congress has once again cast its net widely and indiscriminately in its greed for taxpayer cash. Recall the original AMT, passed in 1969, which was intended to affect a tiny group of the super rich whose accountants and lawyers found ways of avoiding taxes in a pre-Reagan, monstrous, labyrinthine tax code–fewer than 1 percent of taxpayers. By 2017 the AMT was hitting 62 percent of those making between a half million and a million dollars a year, and plenty more in other brackets. For decades Washington couldn’t muster the political will to do anything about it–until President Trump’s tax cuts and reforms in his first year in office fixed the AMT.

The Joint Committee on Taxation assures us that only about 150 taxpayers will be subject to the new corporate AMT. You can bet the house, the farm, the ranch, and the brier patch that the reality will be far uglier. And as the financial legal experts at Vinson & Elkins note, under the law, “whether a corporation should no longer be subject to the [corporate Alternative Minimum Tax]” is “subject to approval of the Secretary of the Treasury.” Also under the authority of the Treasury secretary is the new law’s use of the novel concept of using financial statement income to determine a firm’s tax liability.

So it is baked in the cake that application of the new tax will be political; unpopular firms–say, oil and pharmaceutical companies–won’t be receiving any favors from the president’s appointee at Treasury. This is a tax intentionally formulated to be used by the executive branch as a political weapon, and therefore a threat by which companies can be blackmailed to change their behavior on everything from environmentalism to abortion and sexual preference policies regarding personnel.

Last year’s massively inflationary $2 trillion COVID-19 stimulus spending bill, opposed by all Republicans in Congress, wasn’t enough for a legislature and White House controlled by Democrats. Even with swing Sen. Joe Manchin (D-W. Va.) from Trump-loving West Virginia spending months opposing further spending, the pressure finally caught up with him and he and Senate Majority Leader Chuck Schumer of New York concocted the Inflation Reduction Act, which passed in August with all Republicans in Congress voting in opposition.

The entitlement reform proposals that Biden claimed are inflationary are exemplified by the plan being touted by Sen. Ron Johnson (R-Wis.). Johnson is now well ahead of his challenger for re-election in that purple state. Medicare and Social Security enjoy mandatory spending authorizations annually. This out-of-control spending is on track to drain Medicare funds dry in 2028, while the Social Security trust fund will begin defaulting in 2034. Johnson proposes that Medicare and Social Security be subject to annual budget deliberations–in other words, apply some fiscal sanity to these gargantuan programs for once, with the objective of saving them and keeping the programs’ promises to their beneficiaries, who have been paying into them all their working lives.

As Johnson has put it, “our problem in this country is that more than 70% of our federal budget, of our federal spending, is all mandatory spending. It’s on automatic pilot … you just don’t do proper oversight. You don’t get in there and fix the programs going bankrupt.”

Since Johnson started talking about saving Social Security and Medicare he has pulled ahead of his opponent and surged in the polls.

There are many issues starkly distinguishing Democrats and Republicans in the midterm elections awaiting the votes of the people in less than two weeks—not least the resurgence of violent crime and radical indoctrination against the will of parents in union-dominated public schools. But above all, the voters’ choice is between the exasperation of 40-year-high inflation at the hands of Democrats who can’t stop enacting more and more spending and finding new ways to tax every year, and Republicans who are discovering that it’s popular to describe their plans for fiscal responsibility.

Thomas McArdle was a White House speechwriter for President George W. Bush and writes for IssuesInsights.com 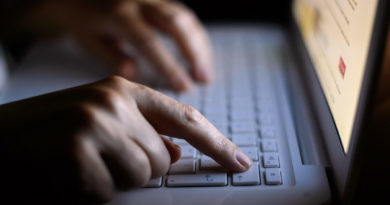 Police Say More Than 200,000 UK Fraud Victims May Be Linked to iSpoof Website