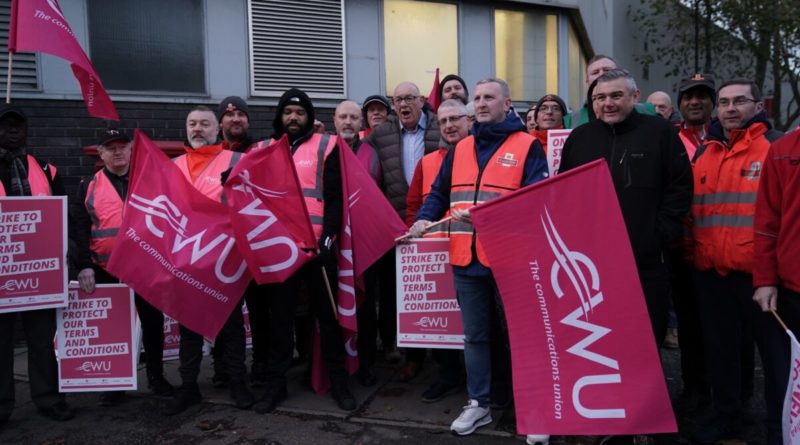 
Strike actions have caused disruptions to British schools, universities, and the Royal Mail as tens of thousands of workers went on strike in worsening labour disputes.

Around 70,000 members of the University and College Union (UCU) are on strike on Thursday and Friday, and again on Nov. 30. It is the biggest strike of its kind, affecting an estimated 2.5 million students.

Meanwhile, teachers across Scotland walked out in their first national pay strike in almost 40 years, shutting every school on the Scottish mainland.

Members of the Communication Workers Union (CWU) are also on strike at the Royal Mail after the union rejected the company’s “final” offer and is pressing ahead with a series of strikes in the coming weeks.

This comes just a day after the Rail, Maritime, and Transport (RMT) union said it will stage a series of 48-hour strikes in December and January, causing disruptions during the festive season.

The UCU says lecturers and other academic staff have suffered a decade of below-inflation pay rises, with a 3 percent increase announced in the summer.

“Our members are absolutely up for this strike in huge numbers because they know what is at stake,” she said.

But Raj Jethwa, chief executive of the Universities and Colleges Employers Association (UCEA), said that strike action will “do nothing” to support students, staff, or the many higher education (HE) institutions “working hard to avoid redundancies or maintain staffing levels.”

He said institutions are “particularly disappointed that UCU is encouraging its members to target students who have endured so many recent disruptions.”

He added: “We respect employees’ right to take lawful industrial action, but it is misleading to their members for UCU to ask them to lose pay in pursuit of an unrealistic 13.6 percent pay demand which would cost institutions in the region of £1.5 billion ($1.8 billion).

“UCU leaders must provide its members with a realistic and fair assessment of what is achievable because strike action does not create new sector money.”

Jethwa said universities are “fully prepared to address the impact of this industrial action” and have “effective mitigations in place to minimise any interruption of learning or services to students and staff.”

Following the talks with the union leader, Harper said in a statement: “This morning I had a constructive meeting with Mick Lynch, where we had an open and honest conversation about the serious challenges facing the railways.

“We have common ground—we both want the dispute to end and we both want a thriving railway which delivers for passengers and workers alike. To achieve this, though, we need to work together, across the entire industry, to ensure our railway industry thrives.

“There is a deal to be done and I believe we will get there—I want to facilitate the RMT and the employers to reach an agreement, and end the dispute for the benefit of the travelling public.”

For his part, Lynch said the minister had agreed to write to him with how he sees the union’s dispute with rail operators “going forward and taking forward steps towards a resolution.”

The transport secretary also said he will “consider” setting up a liaison group at the ministerial level so the industry and trade unions can speak with them about how a settlement can come about, Lynch said.

He said their meeting was “positive” in the sense they had “got rid of the bellicose nonsense that we used to have.”

“We’re now starting to get a dialogue,” he told reporters outside the Department for Transport.

RMT said it has had to resort to strike action because Network Rail and the train operators failed to make improved offers on jobs, pay, and conditions.

But the Department for Transport said: “Strike action risks putting the very future of the entire industry in jeopardy. These strikes are not only damaging the economy but they’re cutting off people in need of urgent care, children going to school, and hardworking families.”

Work and pensions secretary Mel Stride said the consequences of the strikes will be “quite serious,” disrupting medical appointments as well as family reunions taking place over the festive period.

“The timing of these strikes are designed to create maximum disruption across the Christmas period,” he told TalkTV on Nov. 23.