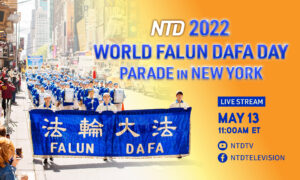 NTD Television and The Epoch Times will livestream the 2022 World Falun Dafa Day parade in New York on May 13, 11 a.m. ET. Access the livestream on this page, and also at EpochTV and NTD.com.

May 13 this year marked the 30th anniversary since Falun Dafa was introduced to the public in 1992, and it is also the 71st birthday of Mr. Li Hongzhi, the founder of the spiritual practice.

Falun Gong, also known as Falun Dafa, is a traditional self-improvement discipline that includes meditation exercises and is based on the principles of “truthfulness, compassion, and forbearance.” Introduced in China in 1992, the practice quickly gained widespread appeal for its moral teachings and health benefits, spreading to over 110 countries around the world.

Fearing that its popularity would jeopardize the Chinese regime’s authoritarian rule, in July 1999, then-regime leader Jiang Zemin launched a nationwide persecution campaign. For 22 years, millions of practitioners have suffered from illegal abductions, imprisonment, torture, and even became victims of horrific forced organ harvesting. As a result, countless practitioners were forced to leave their homes, jobs, or schools.

This year, the World Falun Dafa Day parade in New York aims to celebrate the 30th anniversary of the practice being introduced to the public, and bring to light the senseless suppression of human rights under the Chinese communist regime.