The Chinese provincial government of Jiangsu, where the video of a mother of eight chained up in a shed was filmed, said they would “thoroughly investigate the facts,” state TV said on Feb. 17, a move seen as aimed at soothing public outrage toward local authorities.

The footage of a dazed-looking middle-aged woman, who stood in the corner of a shed with a chain on her neck and no coat amid freezing temperatures, went viral on China’s social media platforms since it emerged in late January.

Appalled Chinese internet users demanded that authorities help her and look into the case. They wondered: Who was the woman? Why was she chained? Under what circumstance did she give birth to eight children? How could they have so many children under the strict one-child national policy?

In response, the county and city authorities issued four subsequent reports, with each conflicting with the previous one, and thereby fueling suspicion.

Feng county, where the woman lives, issued the first two statements, saying she was mentally ill and dismissed suggestions of human trafficking. But the anger erupted as marriage with a mentally disabled person is forbidden in China.

The city-level authorities of Suzhou later said the woman was indeed trafficked and that they had detained three people, including her husband. Public indignation has only grown, with critics saying the handling of these probes was bungled.

Under public pressure, the provincial government of Jiangsu stepped in on Thursday, implying the retraction of previous accounts. The Jiangsu authorities said they will set up a special team, “thoroughly find out the facts, severely punish relevant illegal and criminal acts in accordance with the law, and seriously hold responsible persons to account,” state broadcaster CCTV said on its official Weibo account.

Taking the Shine Off the Olympics

The post once again became the most searched item on Feb. 17, surging ahead of Olympic-related topics on the Twitter-like platform Weibo.

Some social media users said handling the case had taken a shine off the jubilant mood the Chinese regime was trying to encourage during the Winter Olympics.

They drew a comparison between the lack of attention given to the chained woman’s case and state media and government adulation of national athletes such as skiing champion Eileen Gu.

“Instead of caring about the gold medal hanging on some girl’s neck, we should care more about the metal chains around that woman’s neck. That’s because while most of us and our daughters can never achieve the success of the former, it is highly possible that we may accidentally end up as the latter,” wrote one user. The post racked up more than 144,000 likes.

Many of the comments noted the problem of women being kidnapped by human traffickers and then sold to men in villages who need wives has been documented for years as widespread, particularly in rural villages around Jiangsu’s Xuzhou city.

Chinese social media users urged the public to continue to follow the plight of the woman despite the efforts of Chinese censors to remove it from view.

A  well-known Chinese novelist Yan Geling, who was one of the first public figures to speak out for the the chained woman, has had her name censored on Weibo.

As the majority of media steer away from the case, some investigative journalists published reports, digging up documents that questioned the local authorities’ conclusions. One viral report by two former journalists, Ma Sa and Tie Mu, was not visible on the Wechat account on Feb. 14.

Two Chinese women who drove to Feng county to visit the chained mother, who by this time had been sent to a psychiatric hospital by local authorities, were detained by local police, reported South China Morning Post. The two were charged with “picking quarrels and provoking trouble,” which is often used against dissidents.

Responding to Ukraine Tensions, Taiwan Says It Is Watching Situation With China 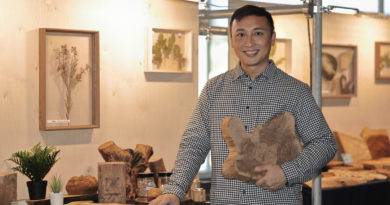 13 Million People Under Lockdown in City in Northwest China Due to Spread of COVID-19, Struggling for Food and Supplies