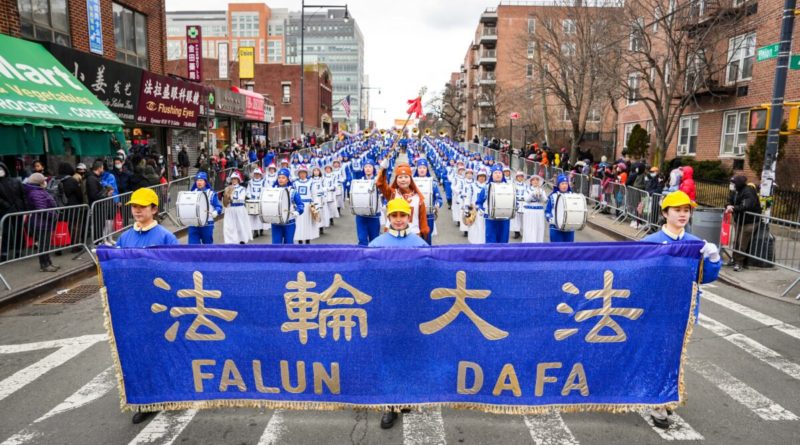 
FLUSHING, N.Y.—A time for renewal and reflection emerged as key themes for adherents of the spiritual practice Falun Gong who participated in Flushing’s Lunar New Year parade on Jan. 21 to usher in the year of the rabbit.

Hundreds of Falun Gong practitioners formed several segments of a thousands-strong parade that marched through the heart of New York City’s largest Chinese community. Thousands lined the parade route to watch the festivities.

Those three principles are the core values of Falun Gong, also known as Falun Dafa, a spiritual discipline rooted in traditional Chinese culture, involving a set of moral teaching and meditative exercises, that was made public more than three decades ago in northeast China. It is now practiced in more than 100 countries around the world.

Wang Lirong, a New York resident originally from Shanghai, walked alongside the parade route from Flushing’s Union Street to Main Street. Holding a clipboard and handing out lotus flower trinkets, she spoke to spectators, particularly those from China, with one goal in mind: to explain the nature of the Chinese Communist Party (CCP) and urge them to cut their ties to the regime.

“The CCP is just like a virus, that’s contaminated the entire world,” Wang told The Epoch Times.

The evil deeds perpetrated by the communist regime are so great that they will not be tolerated by the divine, and thus “Heaven will eliminate the CCP,” she said, citing the regime’s ongoing coverup and mishandling of the pandemic that has led to many people to die from COVID, and its 23-year-long persecution of Falun Gong.

In 1999, the communist regime, feeling threatened by the popularity of Falun Gong which had an estimated 100 million adherents in China, launched an aggressive campaign to eliminate the practice. Since then, millions of practitioners have been thrown into detention sites, where they are tortured, abused, or killed for their organs.

Even though many Chinese may not have personally experienced this persecution, Wang said, over the past three years, almost everyone in China suffered through the horrors of the regime’s “zero-COVID” lockdowns. This should give them pause, and prompt a reevaluation of their association with the Party.

“The pandemic is directly targeted at the CCP,” Wang said, pointing to the surge in Chinese officials and CCP elites who have died in recent weeks.

Therefore the only way to protect oneself, she said, is to renounce one’s affiliation with the CCP and its two junior organizations, which virtually all Chinese were made to join when they were children.

Finding Her Truth Self

Participant Yulia Nova, an entrepreneur from upstate New York, wanted to show Chinese people watching the parade how wonderful Falun Dafa is, she said, adding that the spiritual discipline has helped her in profound ways.

After taking up the practice 14 years ago, Nova saw her thyroid problems disappear within one month. But it was her character that saw the greatest change over the past decade and a half.

By reading the teachings of Falun Gong and applying the principles of truthfulness, compassion, and tolerance, Nova was gradually able to become “a better person, kinder to other people, caring, and really tolerant” of other people “because everybody’s different, and nobody’s perfect,” she said.

Most of all, Falun Gong helped her discover what it meant to be “true to yourself.”

“A lot of times I find we have these little white lies that we follow ourselves, and [that] our society tells us, and we begin to believe these things. And in the end, it’s really not true,” Nova said.

For Nova, one of the biggest lies that she’s had to work to overcome was the communist ideologies and notions instilled in her growing up in the former Soviet Union.

In the communist society, there was no belief in God and morality, and every human relationship was made subordinate to the service of the Soviet regime, she said. Nova recounted an incident when she was 15 when Nova’s mother told her that the KGB had tried to recruit her to spy on her father, a communist party member. Her mother told Nova that she refused to do it.

It wasn’t until years later after Nova left for the United States at the age of 24, that she realized that her mother may not have been telling the truth. The idea of an ordinary woman saying no to the KGB is “unheard of,” she said.

“This was the family that raised me,” Nova said. “That just tells you how evil communist ideology is. It was just so awful.”

Three years ago, Nova made a big breakthrough on her journey to finding her true self.

“All of a sudden, I realized what I am is not what I am, like the whole thing just collapsed,” she said.

“I realized I created all these avatars to protect myself from being hurt. I’ve created avatars that reacted at work, I’ll be a certain way, then I go home, I’m a certain way—so all these personas. The inside of me was never really revealed to anyone.

“And to finally uncover that inner, true, authentic self that I am, it’s just such a revelation because then you don’t have to pretend anymore—You are a true authentic person, no matter where you go.”

What It Means to Be Human

Parade participant Juan Larn, from Manhattan, picked up the practice in the summer of 2020 after seeing practitioners performing Falun Gong’s meditative exercises at Central Park.

Larn was always interested in meditation and Eastern philosophy. “But all of it seemed more theoretical, It made sense and all sounded good, but it didn’t really create a fundamental change in my mind,” he said.

But after he read “Zhuan Falun,” the main text of Falun Gong, “it automatically shifted how I was thinking,” he said.

“I was like, ‘Maybe I found something like a genuine teaching.’ I wanted to continue to pursue, and I’m still on that path,” he added.

He cited one line in the book, “Some people may say that you are good, but you may not really be good.”

“It made me see that I wasn’t up to a standard that I thought; it made me want to raise my standards,” by following truthfulness, compassion, and tolerance, he said.

Given that it’s the new lunar year, which falls on Jan. 22, Juan noted that it’s a good time for people to do a bit of reflection and introspection. He pointed to a new article released by the founder of Falun Dafa, Mr. Li Hongzhi, titled “How Humankind Came to Be” on Jan. 20.

In that article, Mr. Li addresses the purpose of being human, and describes that human beings exist in a place made by the Creator called the “Realm of Desire.”

Juan believes this means that “a lot of things that you think that you might want, that are good for you, might [actually] be desires and attachments.”

“I would say don’t just automatically react to all sorts of things you might want,” he said. “Focus on more righteous principles and really look inside yourself before going outside for satisfaction.”

Nova echoed this sentiment, suggesting people take the time to “really think about what it means to be human to them?”

Particularly after being stuck at home during the pandemic over the past few years, many people have had a chance to reevaluate how they were living their lives.

“And they take time to take care of their spouses or their parents and so forth.”

Being human, Nova believes, is about returning to kindness and integrity.

This means to be “dignified, compassionate, and very tolerant of the world and the things that come about” in our daily lives, she said.