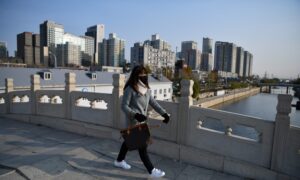 Real estate is one market that proved to be resilient during 2020 as the CCP virus pandemic ravaged the world.

This trend has been encouraged by years of loose monetary policy out of CCP headquarters pre-pandemic. While the regime in Beijing has been more conservative than the United States in its stimulus programs during the pandemic, the Chinese economy has nominally been healthier rebounding from the crisis.

The resulting price surges have increasingly raised the specter of a massive housing bubble, especially among Tier 1 cities such as Shanghai, Beijing, and Guangzhou.

To be clear, the overheating market has mostly been an issue among Tier 1 or Tier 2 cities, and in locations near high-quality schools and good transportation options. Elsewhere in China, in lower-tier cities, rural areas, and certain cities in the Northeast, there are swaths of homes and apartments sitting empty.

The housing bubble also has given rise to a surge in debt, both from consumers as well as property developers. Overall Chinese debt at the end of 2020 reached 350 percent of the country’s GDP.

In many ways, the Chinese housing market is a creation of the CCP. The Party needed a way for its citizens to gain wealth—aside from the domestic stock market, which has its own issues—and the property market has been a critical source of provincial and local revenues arising from taxes and fees.

But Beijing has been careful to manage the bubble. It can’t afford to burst the bubble as the wealth destruction, both from a housing and a stock market perspective, would undermine the stability of its rule. So it needs to slowly inflate the market in a controlled manner, by loosening and tightening liquidity going into the real estate market as needed.

Currently, China is in one of those real estate “tightening” phases.

China regulates real estate sales more closely than the United States. There are laws governing every facet of home buying—how many homes a family can purchase, where they can purchase, and how the purchases must be funded.

In December, regulators at the Central Economic Work Conference, which sets the agenda for China’s economic development path, introduced caps for loans related to housing, mortgage, and real estate development at domestic banks.

In China’s biggest real estate submarkets, authorities are clamping down on liquidity illegally flowing into real estate. The recent curbs remind one of a particular quote from Chinese leader Xi Jinping from 2017, that homes “are for living in, not for speculation.”

Financial institutions in the southern city of Shenzhen were told by regulators to investigate “the flow of business loan funds into property,” according to a March 16 Yicai Global report. Authorities were concerned that some individuals falsified business loan applications to funnel proceeds into real estate.

China also fears that loose monetary policy in the United States and other nations could amplify its domestic housing bubble. Former Chinese finance minister Lou Jiwei warned that the rapid expansion of the Federal Reserve’s balance sheet could have negative spillover effects on China’s macroeconomy, according to a policy report published by the journal Public Finance Research earlier this month.

The premise is that as the United States and other foreign markets become unattractive due to high inflation or currency devaluation, investors may direct their funds to China and potentially pouring into its domestic real estate market.

In a regulatory action focused on personal events, authorities in certain cities (including Shanghai) are restricting home purchases from individuals who have recently divorced.

That’s due to local laws in Shanghai and Beijing, where each family is only permitted to purchase two properties maximum, a restriction imposed in recent years to control housing prices in these cities. Local media report that such restrictions caused many couples to temporarily file for divorce so they can purchase two homes each as individuals, with the intention to remarry later and effectively “grandfather” their housing purchases. Authorities are investigating closing that loophole.

“We’re all very optimistic that property prices in this area will continue to grow … a divorce is the most efficient way to get to our (investment) goal,” a man named Wu Xin said in a report on the Sixth Tone website.