As reports emerge that colorful fentanyl resembling candy sent from China is targeting American kids and young adults, the Biden administration has yet to take action to counter the threat, according to John Mills, former director of cybersecurity policy, strategy, and international affairs at the Department of Defense.

“The White House, the president should be doing something to stop it, and holding China accountable. But they again seem incapable,” Mills told the “China in Focus” program on NTD news, The Epoch Times’ sister media.

The U.S. Drug Enforcement Administration last month issued a warning about an “alarming emerging trend of colorful fentanyl to drive addiction amongst kids and young adults.”

According to Mills, it is a tool used by the Chinese Communist Party (CCP) to take down Americans.

“We have youth that are dying. We now have, the CCP is actively inserting fentanyl and fentanyl components into essentially candy, into essentially knock-off copies of opioids that people can buy on the street,” he said. “This is incredibly dangerous. They are trying to kill Americans.”

Mills called it “a horrendous, grave, mortal risk and threat to America.”

“And if this current administration cared about America and Americans, they would be doing everything to stop this,” he said.

The Epoch Times reached out to the White House for comment.

How Fentanyl Gets Into America

Mills further pointed to the warning about the dangers of fentanyl put out by Alaska, the state closest to China.

The fentanyl that gets to Alaska, according to Mills, is coming through the unsecure southern border transiting the continental United States.

He singled out a report by Sam Cooper, a Canadian award-winning investigative journalist that exposed how corrupt politicians in the communist regime have been using gangs and casinos in Vancouver, British Columbia, to launder dirty money made through the illicit drug trade.

According to Mills, Canada is another transit route by which fentanyl can enter America.

“The modern organized crime in Vancouver is essentially an extension and a paramilitary wing of the Chinese Communist Party,” he noted.

As Halloween looms, the former official in the Trump administration warned parents to be cautious about candy handouts.

“Parents should not accept any form of candy in any kind of handouts. You should only buy candy from trusted stores—which means essentially big name stores,” said Mills.

He continued to urge the Biden administration to hold China accountable by imposing aggressive trade measures.

Another effective approach would be to cut off financial flow to the regime.

As the U.S. accounting audit regulator has recently delivered a warning regarding the integrity and complete access to work papers of accounting firms of New York-listed Chinese companies.

Mills noted that the Chinese regime was trying to set up Hong Kong as essentially a major international stock market to avoid this ramped-up inspection effort.

“You gotta cut off the cash flow to China, you got to have [an] extreme maximum pressure campaign to cut off the financial flows to China,” he said.

Tiffany Meier is a New York-based reporter and host of NTD’s “China in Focus.” 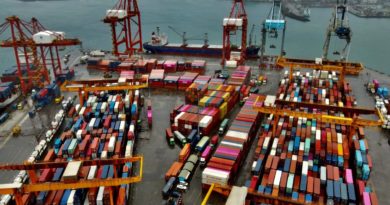 China Buying US Farmland; What Happens After Confucius Institutes Close in the US