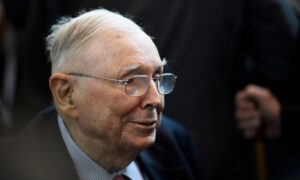 “Communists did the right thing,” said Munger on what the Chinese regime did to Ma, in an interview with CNBC on June 29.

Munger, a longtime business partner of Warren Buffett, said the Chinese Communist Party (CCP) “just called in Jack Ma” and told him “you aren’t gonna do it, sonny,” pointing out that the Chinese tech billionaire was looking to “wade into banking” and “just do whatever he pleased.”

“I don’t want the, all of the Chinese system, but I certainly would like to have the financial part of it in my own country,” Munger said.

Ma had publicly criticized China’s financial industry in October last year, when he said that Chinese banks had a “pawnshop mentality” and added that the Chinese finance sector “basically doesn’t have a system.” After making the remarks, Ma disappeared, before making his first public appearance in January.

Meanwhile, the Chinese regime launched an antitrust probe against Alibaba in December last year, before slapping a fine of $2.8 billion on it in April for anti-competitive tactics. In response to the fine, Alibaba issued a statement saying the company was “full of gratitude and respect” since it “would not have achieved our growth without sound government regulation and service.”

Munger also criticized the U.S. free-market economy. He explained, “Our own wonderful free enterprise economy is letting all these crazy people go to this gross excess,” meanwhile the Chinese regime “step[s] in preemptively to stop speculation.”

Additionally, Munger praised China’s response to the COVID-19 pandemic, saying that as a totalitarian state, the Chinese regime could “simply shut down the country for six weeks.”

“That turned out to be exactly the right thing to do. And they didn’t allow any contact,” Munger said.

The Chinese regime took draconian measures to stop the spread of the CCP virus, the pathogen that causes the disease, after concealing the outbreak the outbreak by silencing whistleblower doctors. These measures included sealing off residents’ doors and forcing people to take unproven COVID-19 drugs.

In January, Human Rights Watch called out these draconian measures, urging the Chinese regime to stop its campaign against people seeking redress for abuses linked to the outbreak.

“The Chinese government’s narrative that it has won the COVID-19 ‘war’ is conditioned on silencing those who speak out about failings in the government’s pandemic response and abuses committed under the pretext of stopping the spread of the virus,” said Wang Yaqiu, China researcher at Human Rights Watch, in a statement.

Some Chinese citizens have filed lawsuits against government officials in Wuhan, the epicenter of the CCP virus outbreak last year, over their handling of the outbreak.

Munger has been open about his admiration for the Chinese regime in recent months. During a shareholders meeting in May, he praised the Chinese communist leaders for how they allowed “businesses to flourish” and that there were now “a bunch of billionaires” in China.

In February, he told the annual meeting of the Los Angeles-based Daily Journal Corp., where he serves as chairman, that “the strongest companies in the world are not in America. I think Chinese companies are stronger than ours and are growing faster.”

Beijing Shows a Hint of Desperation