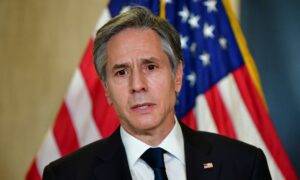 Secretary of State Antony Blinken remained elusive when asked whether the United States will hold the Chinese regime accountable for how it handled the COVID-19 pandemic, saying the attention should be on preventing future pandemics.

“I think the issue for us is to make sure that we do everything possible to prevent another pandemic, even as we’re working through this one,” he said during an interview on CNN’s “State of the Union” that aired on March 28.

A large part of this, he said, is “making sure that we have a system in place, including with the World Health Organization, that features transparency, that features information sharing, that features access for international experts at the start of something like this.”

Blinken’s remarks contrast with those of his predecessor, Mike Pompeo, who had been openly critical of the regime’s lack of transparency regarding the virus and urged for holding the regime accountable.

President Joe Biden announced the United States’ reengagement with the World Health Organization on his first day in office, reversing the withdrawal decision by the Trump administration, which saw the agency as being too China-centric.

Pressed on whether that means “no repercussions, no punishment” for “the damage that is being done around the world because of this pandemic,” Blinken acknowledged a need to have “accountability for the past,” without elaborating on what possible measures would be taken.

“I think our focus needs to be on building a stronger system for the future,” he said.

Blinken also declined to label China as “the United States’ biggest adversary,” saying that there are also “competitive” and “cooperative” aspects of the relationship.

The WHO is due to release findings on March 30 from an investigative trip to China’s Wuhan Province about the origin of the virus.

Leaked versions of the report, echoing lines of the WHO scientists at their trip’s conclusion, left open all hypotheses except an accidental lab leak, which it said was “extremely unlikely.”

The State Department under Pompeo flagged the Wuhan Institute of Virology, the lab at the heart of the lab theory debate, saying that several researchers there had fallen ill with symptoms similar to COVID-19 before the first identified virus patient.

The regime has bristled over criticism of its role in the pandemic. It has pushed claims that the virus may have arrived in Wuhan via packaging of frozen food products, an idea that both the WHO and the U.S. Centers for Disease Control and Prevention had already dismissed.

The delay of the WHO report has called into question the independence of the report and raised concerns of possible Chinese influence, with Beijing on March 26 giving an outline on the research, a move critics see as an attempt to project its version of events.

“We’ve got real concerns about the methodology and the process that went into that report, including the fact that the government in Beijing apparently helped to write it,” Blinken said during the CNN interview.

White House press secretary Jen Psaki, during a March 26 press briefing, said the administration has restaffed its public health team on the ground in Beijing and called for an investigation into the virus origin and the “lack of transparency from the Chinese.”

“So we’ll see what the report says,” she said. “Where we have concerns, we’ll look at the underlying data, if we have access to that. And then we’ll have to make a determination through an interagency process on what’s next.”

Nicaragua Seizes Former Taiwan Embassy to Give to China