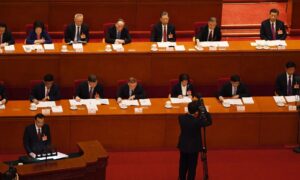 Making a greater effort to attract top experts from around the world was listed as a priority in China’s 14th Five-Year-Plan that was just passed in the regime’s recent Two Sessions meeting in Beijing on March 11.

When talking to Radio Free Asia, American-based Chinese economist Cheng Xiaonong said the new five-year plan is an extension of China’s previous “Thousand Talents Plan.” The essence is the same, both plans intend to steal foreign intellectual property and advanced technology by poaching experts from overseas.

Only the new five-year plan is more aggressive.

He said the goal of the new 5-year plan is still in key areas related to military expansion.

According to the plan, more investment will be poured into basic research, and experts will be heavily rewarded.

The so-called “Thousand Talents Plan” is the Chinese Communist Party (CCP)’s program to identify and recruit high-level overseas experts, which has been in place since December 2008.

Apart from the national level “Thousand Talents Plan,” the CCP also has other plans such as the “Hundred Talents Program” of the Chinese Academy of Sciences and the “Changjiang Scholars” program of the Chinese Ministry of Education, as well as a number of local government recruitment programs.

Between 2008 and 2016, local governments of China recruited about 53,900 talents from overseas, while over 7,000 experts were recruited through the “Thousand Talents Plan” and the “Hundred Talents Program.”

To “create and train a high-level talent troop” and “to provide an internationally competitive and attractive environment for overseas scientists to work in China,” the plan requires the implementation of a more open talent policy: constructing a scientific research and innovation highland to attract and gather outstanding experts from home and abroad.

Policies that can enable high-end foreign experts and professionals to stay and work in China, as well as a permanent residence system for foreigners should be perfected, the plan says.

In the meantime, the establishment of a skilled migration system should be explored.

Systems should be established to ensure that foreign experts and professionals can have better salaries and benefits, social security, tax incentives, as well as good education for their children, etc.

China should also take the lead in “designing and initiating international scientific programs and projects,” allow the science funds to play a unique role, increase the opening of national science and technology programs to the outside world, launch a number of major scientific and technological cooperation projects, study the establishment of global scientific research funds, and implement scientist exchange programs.

According to a 109-page report (pdf) released in November 2019 by the United States Senate Permanent Subcommittee On Investigations Committee on Homeland Security and Governmental, the FBI “ has been slow to respond to threats posed by Chinese talent recruitment plans.”

The report says, “Despite the Chinese government’s public announcements in 2008 of its intent to recruit overseas researchers with access to cutting-edge research and absorb, assimilate, and re-innovate technologies, the FBI did not identify Chinese talent recruitment plans as a ‘threat vector’ until 2015.”

China is the most aggressive among countries that “seek to exploit America’s openness to advance their own national interests,” the report said. “Federal agencies are not prepared to prevent China from transferring taxpayer-funded research and stealing intellectual property.”

Since 2018, the FBI has increased the number of arrests and prosecutions of Thousand Talents scholars.

In April 2019, former GE engineer Xiaoqing Zheng was charged with economic espionage and theft of GE’s trade secrets by the FBI. Meanwhile, the MD Anderson Cancer Center in Texas removed three of five scientists who had ties to the “Thousand Talents Plan” and were identified by U.S. federal authorities as being involved in Chinese efforts to steal American research.

Before the U.S. government ordered the CCP to close its Houston consulate in July 2020, the FBI in Houston had been investigating Chinese nationals’ efforts to funnel advanced research from Houston’s University of Texas MD Anderson Cancer Center back to China.

Keping Xie, a former professor in gastroenterology research at the MD Anderson Cancer Center, and a member of Thousand Talents Plan, was part of the FBI’s focus.

In September 2019, Thousand Talents Plan scholar Yiheng Zhang, a former professor at Virginia Tech, was found guilty of conspiracy to defraud, including charges that he used $1.1 million in research funding he applied for in the United States for research projects in China.

In May 2020, Xiao-Jiang Li, a former Emory University professor and Chinese Thousand Talents Plan participant, was convicted and sentenced for filing a false tax return. He was accused of replicating his U.S. research for the Chinese Academy of Sciences and earning at least $500,000.

In June 2020, Charles Lieber, the former Chair of the Department of Chemistry and Chemical Biology at Harvard University, was indicted on charges of making false statements to federal authorities regarding his participation in China’s Thousand Talents Plan.

He was accused of receiving $50,000 per month in salary, $158,000 per year in living expenses, and more than $1.5 million in research funding from Wuhan University of Technology in China.

In September 2020, Turab Lookman, a former employee of Los Alamos National Laboratory, was sentenced to 5 years of probation and fined $75,000 for lying about his participation in the Thousand Talents Plan.

Emily Weinstein, a research analyst at Center for Security and Emerging Technology at Georgetown University, is in charge of the Chinese Talent Program Tracker: “a catalogue of Chinese Party-State-sponsored initiatives aimed at cultivating China’s domestic talent pool in support of China’s strategic civilian and military goals.” She said in December 2020,  “At this point, it would be really hard to find people putting [their participation in] Thousand Talents on a resume in the U.S. That doesn’t mean that all talent programs are gone.”

“[The] Thousand Talents was merged into a different talent program with a new name—it is now the High-End Foreign Expert Recruitment Program,” she said.

Cheng Xiaonong is a Contributor to The Epoch Times.