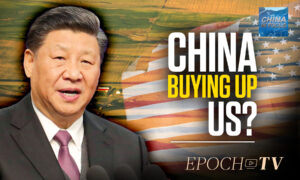 The Chinese Communist Party is buying up farmland in North Dakota. But there’s a problem: the land is near a military base. And lawmakers are voicing concerns.

Huawei is reportedly caught sniffing around U.S. nuclear sites. The Chinese telecom giant has been installing its gear close to the facilities. With it, the FBI says the company may be able to disrupt U.S. military communications.

A report shows the Chinese regime is building a network of informants inside America’s central banking system. Allegedly, Chinese officials even threatened to imprison a Fed economist to force him to hand over sensitive economic data.

Some Americans are more willing to share their DNA with genetics companies—hoping to learn more about their health and heritage. But a lawmaker is warning against the services. He says foreign adversaries could use it to make targeted bioweapons.

Topics in this episode: