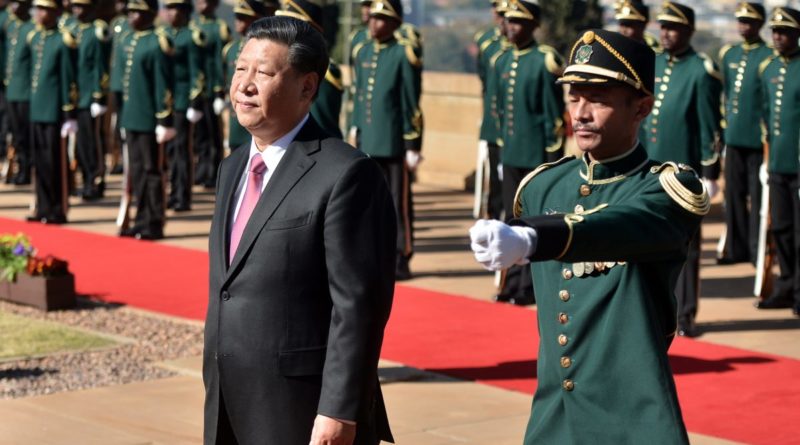 
Taiwan’s foreign minister Joseph Wu has warned that China is “more likely” to make a move against the island in 2027. Wu says Chinese leader Xi Jinping may see aggression against Taiwan as a way to leave a legacy from his third term in office.

“To me, 2027 is the year that we need to watch out … because of the domestic power situation in China,” Wu said in an exclusive interview with Sky News on Jan. 18.

“In 2027 Xi Jinping is likely to go into his fourth term. And if in his previous three terms, he cannot claim any achievement during his office, he might need to think about something else for him to claim as his achievement or his legacy,” he added.

Wu pointed to the looming situation that the Chinese regime is facing.

“If you look at the Chinese situation right now, the economy is going down. People are not happy; the real estate business seems to be melting down.

“If Xi Jinping cannot change the situation domestically in China, [he] might want to resort to a use of force or creating a crisis externally to divert domestic attention or to show to the Chinese that he has accomplished something.”

Beijing has recently announced that the country’s gross domestic product grew by just 3 percent in 2022, down from 8.4 percent in 2021.

China’s Business Confidence index fell to 48.1 in December from 51.8 in November, according to the World Economics’ survey of sales managers at over 2,300 companies, conducted Dec. 1–16.

The figure was the lowest since the data began to be documented in 2010.

According to Wu, Xi might see an invasion of Taiwan as a way to distract from China’s domestic problems.

“We are concerned that Taiwan might become his scapegoat,” he said.

The foreign minister’s comments came as China is escalating its military actions around the island, sending fighter jets toward Taiwanese airspace regularly.

Taiwan’s Defense Ministry stated that it detected 57 Chinese aircraft and four naval vessels around Taiwan at 6 a.m. local time on Jan. 8, with 28 of the warplanes entering Taiwan’s air defense identification zone (ADIZ) and crossing the Taiwan Strait median line. Among them, two nuclear-capable H-6 bombers flew to the south of Taiwan, according to the ministry map.

According to the Chinese command, those military assets were participating in combat drills in the waters and airspace around the island that focused on land and sea assaults. It was the second such exercise in less than a month.

With these exercises, Wu said, “the Chinese want to threaten Taiwan into submission so they want to conquer Taiwan without using military force to attack Taiwan.”

“Look at the proximity of the Chinese aircraft to our aircraft,” he said.

Wu depicted these moves as very “dangerous and provocative actions” that could lead to the “worst case scenario.”

“Very often, you see the sum of a tiny little accident might spark into a major war,” he said.

The foreign minister acknowledged that the island had previously been slow to prepare for a potential war with China in terms of ammunition and armed forces.

“We understand that in previous years, we might not have acquired sufficient ammunition,” he said.

Wu cited the conscription extension that the island recently announced as an example of reform measures.

Open to Talks But Without Preconditions

Wu said that Taiwan would handle the escalating situation with “self-restraint” and “responsibility.”

“We understand our responsibility even though we have the commitment to [restraint] ourselves, but at the same time, we don’t want to see the war happening. And therefore we took very responsible, responsible steps in preventing the crisis [from escalating] into a major crisis,” he said.

Wu affirmed that the island nation is open to talks with China but they would not come with “political conditions.”

He pointed to a speech by the Chinese leader on Jan. 2, 2019, in which Xi insisted on Taiwan recognizing the “one China” principle—that China, under the CCP, has legitimate rule over Taiwan—and that the “one country, two systems” model could be adopted for the island.

Wu said that those preconditions are unacceptable.

“Accepting those Chinese preconditions means that we are submitting to China and that is something that the people here in Taiwan would never accept,” he said.

Reuters and Annie Wu contributed to the report.