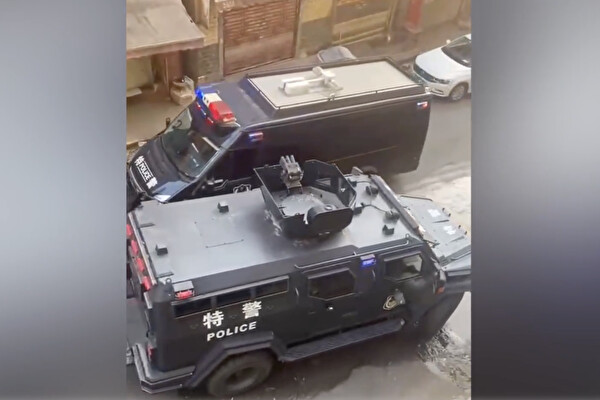 
A city in China’s south-central Hunan Province reportedly sent armored police vehicles on patrol, with the loudspeakers mounted on the roof playing warnings: “Do not leave your residence!”

In a video clip posted on Chinese social media platforms and on Twitter, the armored police automobiles are labeled “Zhuzhou Special Police” and loudspeakers keep broadcasting: “Do not leave your home. Do not visit other people’s homes. Do not gather. Those who do not obey the command and violate the epidemic prevention regulations will be dealt with severely.”

The broadcasting says that the police are “conducting armed patrols of the key areas of Yuetang subdistrict.”

The video is no longer available on Chinese social media, but a tweet with the video by a netizen named Songpinganq had over 8,000 views by Nov. 16.

Yuetang subdistrict is one of the six subdistricts under the jurisdiction of Hetang district, Zhuzhou city.

Zhuzhou is a prefecture-level city located in eastern Hunan Province. It administers five districts, one county-level city, and three counties, with a population of 3.9 million.

The Epoch Times wasn’t able to verify the authenticity of the video clip, but residents of the neighborhood said they recognized the voice from the loudspeaker and knew the streets shown in the video.

Police Vehicles Are to ‘Scare People’

The armed police vehicles only serve the purpose of scaring the people, according to residents of Zhuzhou.

“The armored police vehicles appearing in Yuetang subdistrict say in their loudspeakers that they are conducting ‘armed patrol.’ They are not targeting the COVID-19 virus; they are targeting us people! They want to scare us,” a man who lives in the Yuetang subdistrict said in an interview with The Epoch Times on Nov. 14. The man used the pseudonym of “Mr. Wang” and spoke to The Epoch Times on condition of anonymity over fear for his safety.

Wang confirmed to The Epoch Times that the area shown in the video is the Yuetang subdistrict.

“I am familiar with the streets, and I know the voice from the loudspeaker,” Wang said.

But desperate residents are no longer afraid of the authorities and the armored police vehicles could only arouse greater resistance from the people, Wang said.

“I know that a man in Hetang district breached the barricades several days ago, trying to get out from the locked-down Yuetang subdistrict because he wanted to get back to work. But the police at the checkpoint stopped him,” Wang said.

Wang added that a villager from Pukou Town, Liling County, used a knife to attack a guard who tried to stop him from leaving the village. The staffer was injured but wasn’t in life-threatening danger, said Wang.

The day after the two incidents, Zhuzhou municipal government eased isolation measures imposed on most of the areas, except Hetang and Lusong districts, Wang said.

“I have been locked down for many days now. If the isolation measures continue for several more days, I will run out of food. Then I will definitely breach the barricades as well because I will be starving,” said Wang.

A villager of Wulidun village, Liling county, confirmed to the Chinese language edition of The Epoch Times that another villager from Pukou town attacked a guard who prevented him from leaving the village. The villager who was interviewed used the pseudonym “Mr. Li.”

“The whole village was isolated and no one was allowed to go out,” Li told The Epoch Times on Nov. 14. “So the villager who wanted to leave slashed the guard with a knife. The guard was injured and still alive.”

The Epoch Times reached out to a business owner in Pukou town on Nov. 14, who declined to comment on the incident.

A resident of Caifu Residential Compound in the Yuetang subdistrict who spoke to The Epoch Times under the pseudonym of “Ms. Lin” said her area had been under isolation since Nov. 3.

“All the food at home has been eaten up,” Lin said. “We are in a key area of isolation. We don’t know when the government will lift the isolation.”

She saw armed police vehicles patrolling in the subdistrict several days ago.

“It’s ridiculous that [the authorities] sent the armed police vehicles to the area, because we are all sealed within our home,” Lin said. “They look as if they are holding guns to kill us. They just want to scare us!”

The incidents happened after the Chinese communist regime’s top health body released 20 new COVID-19 guidelines on Nov. 11, easing its COVID-19 policies to a certain extent, in an effort to soothe Chinese citizens’ anger over the country’s zero-COVID policy.

However, local governments in China have continued implementing stringent lockdown measures, arousing more public outcry from Chinese residents. Protests have broken out in multiple cities in China, including the southwestern municipality of Chongqing and China’s southern commercial hub of Guangzhou.

The Epoch Times reached out to the Zhuzhou municipal government for comment and has not received any reply as of press time. The reasons for the armed police patrol, except as stated by the residents, are still unknown.

Calls by The Epoch Times to the Pukou town government and the town hospital were not answered.

The Epoch Times called the propaganda department of Liling County on Nov. 16, and the staffer answering the call denied the attack in Pukou town. He told the Chinese-speaking reporter that the lockdown of the village of Pukou town had been lifted.

“The isolation has been lifted for several days. There is no such thing as a villager attacking a guard. It is a rumor. We have taken control [of the village],” the staffer from the county’s propaganda department said. He didn’t give his name on the phone.

The Epoch Times called a shop near the Pukou town government office complex on Wednesday, and the owner said that the whole town, including the villages under its jurisdiction, is still under lockdown, which is expected to be lifted several days later. The shop owner said she has no idea of the number of days before the lockdown is to be lifted.

Zhao Fenghua and Hong Ning contributed to this report.