In a chilling episode of “China in Focus,” Tiffany Meier gives an in-depth briefing on a nuclear threat facing the United States from waters thousands of miles away. The episode explains that today the Chinese Communist Party’s (CCP’s) nuclear missiles have a range of over 6,000 miles, meaning that if they wanted to launch these missiles from the South China Sea and hit the West Coast of the United States, they could do it at any time. Meier explains that China is potentially on its way to controlling those waters, and breaks down how the South China Sea could impact America’s future.

Meier says this threat facing the United States “could put America’s fundamental freedoms at risk.” How exactly? The threat first has to do with China’s nuclear capabilities. These Chinese missiles placed in the South China Sea are warheads, more powerful than atomic bombs, and strong enough to wipe out hundreds of thousands of people within minutes. If Beijing mounts these missiles on nuclear submarines, they can travel even further. If China’s nuclear submarines leave the South China Sea, bypass the Bashi Channel, and reach the Midway Atoll, from there the nuclear missiles can directly hit the East Coast.

In a concerning incident last April, the Chinese Navy commissioned a new submarine with an emblem of a Chinese nuclear missile flying from a submarine toward the continental United States. The Chinese media reports describe this emblem as “having a deep meaning” and that it “manifests the mission and team spirit of this submarine.”

Across the ocean, the United States currently maintains a strong nuclear arsenal, with more warheads than China and the ability to track Chinese submarines, preventing them from delivering nuclear attacks. However, once Chinese submarines dive deep enough into the sea, they become difficult to track. Once that happens, a surprise attack on America becomes possible.

For this reason, the South China Sea is vitally important for the CCP, because their submarines can find safety in those waters, being as deep as 10,000 feet, which is deep enough that American satellites would not be able to detect Chinese submarines. In the past, their submarines only operated in the Yellow and East Sea, where waters are shallow, less than 300 feet. Shallow waters made it easy for American satellites to detect them, which is why the South China Sea is critical for China’s nuclear strike ability.

Thankfully, those waters are not solely under China’s control, although much of it does fall under their territory, and China’s military is occupying many areas of those waters. But how can China occupy international waters? Over the years, China has been piling sand on the reefs of the South China Sea, turning the reefs into artificial islands and building airstrips, bunkers, and missile silos on them. These moves have essentially militarized these islands.

This is a tactic they have successfully accomplished with the Paracel Islands, Scarborough Islands, and Spratly Islands. This has given them an opportunity to create major naval bases, and some of the bases they have already established are the size of Pearl Harbor or larger. Having these bases in China’s possession, along with the Chinese warships having more power than anyone else in their region, allows the Chinese to remain unchallenged.

As of now, shutting down the entire South China Sea in order to completely control it would prove challenging for China. The ability to stop and inspect every country’s commercial vessel is something they likely could not execute today. However, successfully militarizing those areas in the South China Sea has greatly enhanced their military capability and has tipped the balance of power in China’s favor.

In 2015, the balance of power in the South China Sea was still even. Now, China has more ships than anyone else and has built seven islands and armed them, which gives them a certain level of control. China now has the ability to make a statement. If they wanted to sink a few ships and scare the region into obeying them, they could do that, and it would be difficult for the United States to get in the middle of it and deter them.

Meier breaks down how the United States has responded to this threat, mainly by patrolling in the South China Sea, sending a message that the United States is committed to the rule of law and showing that they don’t allow bullying of other nations by bigger nations. But the episode mentions the difficulties associated with this strategy—for instance, the carrier strike group had to leave the sea after patrolling due to the absence of military bases, which would allow them to get the supplies they need in time. “Sending down one destroyer once every two months or two weeks isn’t really a deterrent,” a guest speaker on the show and former Navy officer said. Many countries bordering the sea have protested China’s actions, but none have been able to stand up against Beijing.

For the Chinese regime, the South China Sea is important, because from those waters, the Chinese can push their Navy fleets closer to the United States. Currently, the Chinese appear to be eyeing several choke points in the Pacific, where Americans have fought in bloody battles during World War Two. Americans have fought, bled, and died for these islands, in order to keep them free and open, yet, Beijing appears to be making inroads into those areas.

When looking at a map, the strategy becomes clear: if China controls the sea, its military force can travel through areas that have no commercial value, but are a clear military advance that allows them to attack the United States. The episode poses the question of what would happen when America sees Chinese missiles and warships patrolling right off the United States?

The episode explains the motives behind these strategic advances, with China’s goal to be “all under heaven.” This Chinese saying is derived from the CCP’s belief that they should have complete control over the world’s geography, and that the Chinese want to be the one power that is able to call the shots in the new global order. Their final objective is to force the United States to surrender to China, meaning that Washington would do whatever Beijing asks them to do.

If Beijing got to call the shots, what would that mean for the American people? It would mean that decisions wouldn’t be made in Washington, or the free market, or by free people, but rather they would be made to follow the rules and regulations of the CCP. The episode warns to “stay alert of Beijing’s trajectory. We can’t ignore or dismiss it or they will be able to keep on track.”

What can the United States do to deter this threat from China? Meier breaks down a few key strategies, such as economic sanctions, building up the Navy and Air Force, and increasing defense spending. According to Meier, the United States military has been deprived of the resources they have needed over the years. The Biden administration has proposed an over $7 billion budget for the Pentagon, but GOP lawmakers say the proposal is actually more of a budget cut because it doesn’t include inflation.

Before signing off, Meier updates her viewers on the news of the day, citing disturbing incidents in China of deaths from COVID-19 vaccines being covered up. The episode follows one man’s story of dying shortly after receiving a vaccine, and the Chinese authorities even contacting his daughter telling her to keep the matter quiet. According to interviewees, the daughter yielded to the Chinese regime out of fear, worrying that they would come after her. Some people in China say that they are being forced to be inoculated against their will, with mandates, getting fired, or receiving pay cuts. It is also reported that the Chinese also make people sign waivers in some cases claiming that they are getting the vaccine willingly.

In addition, Chinese athletes’ genders and the issue of doping in the Olympics are under scrutiny. Some athletes have spoken out about the practice of doping, saying it is arranged by the coaches and the government, who prescribe the practice and then teach the athletes how to avoid doping violations. Some athletes cite the physical conditions and deterioration that happened as a result, making them have to quit their sports at the peak of their career.

Watch the full episode for more in-depth information on the Chinese nuclear threat, and the current news unfolding in China.

China in Focus premiers every Friday at 9 p.m.—exclusive on EpochTV.

Emily is a writer for The Epoch Times and a freelance political journalist. With an extensive background in Political Communication and Journalism, she is committed to serving her country by bringing the truth about important issues of the day to the American people. 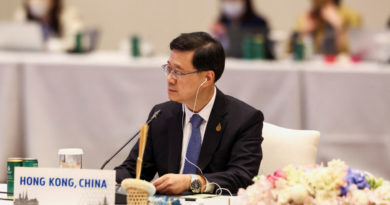 Most Political Olympics Ever? Why China Always Politicizes Everything, Explained