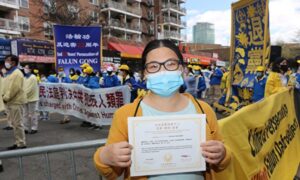 On April 18, Ms. Huang Yingzhou, an immigrant from China, announced her withdrawal from the Chinese Communist Party (CCP) and its affiliated organizations at a rally in New York City to commemorate the 22nd anniversary of the April 25 peaceful appeal in Beijing.

The quit the CCP movement (Tuidang in Chinese) began in December 2004 after the publication of the editorial series “Nine Commentaries on the Communist Party” by The Epoch Times. Since then, it has become a global movement of Chinese people renouncing their ties to the CCP.

As of April 21, more than 376 million Chinese people have quit the CCP and its affiliated organizations, according to the Tuidang center.

“Back then, I was forced to join it. I’m really happy to be able to quit it here today. It’s like a lasso on me that is broken and I’m free from this evil,” Huang said.

Huang told The Epoch Times how she learned about the CCP’s true evil nature from her own family’s plight in the past.

Huang said her grandfather, a “barefoot” doctor (one without formal medical training), was a good person and took good care of all patients who came to see him in his village. Being a follower of China’s first provisional president, Sun Yat-sen, he was arrested and beaten to death by the CCP. “My father was about eight to nine years old when my grandmother was taken to a labor camp following my grandfather’s arrest. He had to hide in the mountains to escape from being arrested and persecuted,” she added.

Huang’s father had to survive by foraging in the mountains. But her two uncles, who were around four or five years old at the time, were starved to death because they had no one to care for them at home.

“I have always hated the CCP,” Huang said. “Those two generations have suffered so much, but there has been no way to redress their grievances, so I have been very sad.”

Huang also described how her father saw the CCP very clearly. “My father always told us that ‘the Communist Party is thugs’ and that everything it represents is fake. They relied on gangsters to seize power and deceive many Chinese people,” Huang said.

“My father also told me that my grandfather’s last words were: ‘If the Communist Party falls one day, you must tell me at my grave,’” Huang said. “My father always wanted to see its fall and said that if he could not live long enough to see that, I must tell him at his grave when that happens.”

Hope for More Chinese People to Quit the CCP

While she was growing up in China, Huang did not have such a deep understanding of the CCP initially, and it was only after she started working that she really began to see its evil nature.

“As I become more aware of pervasive scandals such as those of tainted milk powder and vaccines, I see how unscrupulous businessmen and corrupt officials work together to make their profits under the guise of doing good for China. There are also many people who are brave enough to reveal the truth and speak out for what is just, only to be suppressed and persecuted by the authorities,” Huang said.

“I am slowly beginning to believe that the CCP’s news is superficially glamorous, but in reality, there are a lot of dark secrets that are being covered up, and the weak and innocent have no place to speak out,” Huang said. “Please see the CCP and its evil clearly, and there are many things out there worth being looked into.”

Finally, Huang said she was very proud to now be free from the shackles of the CCP, but she is concerned that many people in China still do not know the truth and are still being deceived by the CCP. She hopes that more Chinese people will join her in quitting the CCP’s organizations and depart from the evil to have a better future.

Lin Tianzhong and Liu Qiaoling, two others who quit the CCP at the rally, said that they don’t like the one-party dictatorship and want the mainland to have a democratic system like the United States.

Li Linzhao contributed to this report.

After 25 Years of ‘One Country, Two Systems,’ Can Hongkongers Still Believe in a Better Tomorrow?