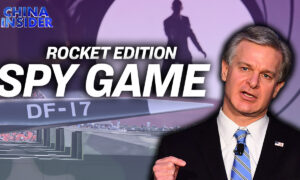 In a spy game like the Cold War, China’s threat is mainstream. Both British and American intelligence have called out China. And news regarding a defector from China is raising eyebrows. Can a rocket scientist from China with top secrets on its hypersonic weapons change the landscape of this spy war between the United States and China? And have we found the antidote to the nuclear poison?

I spoke with Olivia Enos from the Heritage Foundation on how to approach the Olympics starting this week. She gives her take on the issues of China hosting, what we can do to support athletes attending the event, and why Americans should care about China’s human rights abuses.

‘Can’t Assume’ US Defense Sector Will Remain Best in World

Millions of Chinese Customers Unable to Access Their Bank Deposits