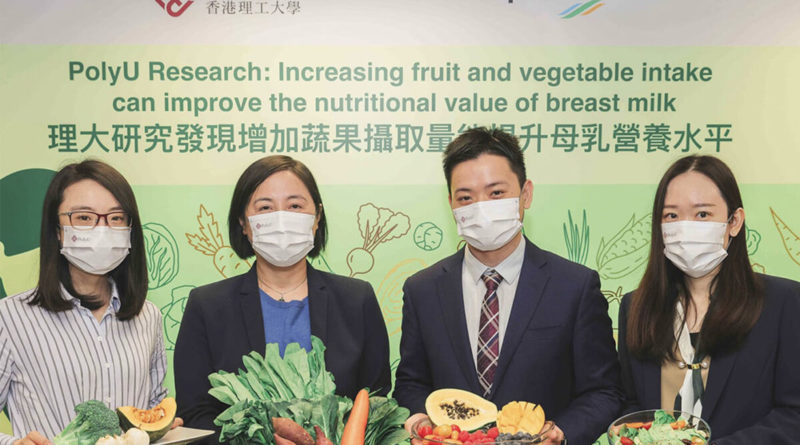 
The Research Institute for Future Food (RiFood) of Polytechnic University analyzed the dietary record of lactating women in Hong Kong and the nutrient levels of their breast milk. The study suggests that women usually fail to consume enough fruit and vegetables to develop a dietary habit that maintains the nutrient level of breast milk, especially the carotenoid and polyphenol content.

The number of women in Hong Kong who choose to breastfeed their babies has been steadily rising. Breast milk contains different nutrients and plays a vital role in the healthy growth and development of infants. The research team pointed out that the first 1,000 days—from pregnancy to a two-year-old infant—forms the basis for establishing long-term health.

The PolyU research team collected breast milk samples and a three-day dietary record from about 90 lactating women and analyzed the carotenoid and polyphenol content. The study found that only four percent of the women had dietary habits that met the Department of Health recommendation to consume at least two servings of fruits and three servings of vegetables per day, or the recommended intake of vitamin A according to the Chinese Dietary Reference Intake.

The team also said that the the breast milk of lactating women who had a higher intake of fruits and vegetables, had higher levels of carotenoids. Dr. Christine Li Shi-ying, Teaching Fellow of the Department of Applied Biology and Chemical Technology of PolyU, said some carotenoids would be converted to vitamin A to promote the development of an infant’s brain, vision, and immunity, and can protect the retina from damage by strong light.

The research also found that there is a significant correlation between the consumption of fruit and vegetables by lactating women and the polyphenol content in their breast milk. Dr. Daisy Zhao Danyue, Assistant Professor of the Department of Applied Biology and Chemical Technology of PolyU, said polyphenols are powerful antioxidant and anti-inflammatory compounds that can prevent cardiometabolic diseases and reduce the risk of bacterial infection.

‘The World Is Watching You,’ Garneau Tells Chinese Regime