Commemorative activities for the third anniversary of June 12 were held in a number of places in the UK. In the afternoon on June 12 in Manchester, northern England, Hongkongers turned up in droves and held a parade and rally titled “Be water, be united (如水再聚 莫失莫忘).” Organisers estimate that more than 3,000 people participated.

Pro-CCP Man Taken Away by Police

At the rally, after the parade, a suspected pro-Communist man in red came to the scene to make trouble. The crowd responded by chanting “May Heaven kill the CCP (天滅中共)!” In the end he was taken away by two police officers, amid the loud applause of all the people there.

At the start of the event, attendees all gathered at the local St. Peter’s Square. The rally began at 3:47 p.m. local time, the same time as on June 12, 2019, when the police started firing tear gas onto demonstrators who were protesting the extradition bill. This took place at the junction of Tim Wah Road and Harcourt Road in Admiralty.

The parade in Manchester then followed. At the beginning, a large number of participants raised their yellow umbrellas and remained silent for 6 minutes and 12 seconds. During that time simulated tear gas and sound effects of the protest scene were played.

The host of the conference gave a speech before the start of the parade and was asked by someone, “Whether Hong Kong could be recovered by marching in the UK?” In response he said, “To the Hongkongers that left Hong Kong and came to the UK, it is not just to help the next generation understand freedom. Although Hong Kong may not be restored immediately, the history of Hong Kong’s struggle, its culture and the Hong Kong community sense must never disappear from the world. Therefore, Hong Kong people must protect themselves. Speak up, continue the history of Hong Kong people, and remind overseas Hongkongers to stick to their beliefs: don’t chase ghosts; don’t cut ties; don’t divide; don’t hurt pals; climb mountains together; maintain conscience; and pay back to society (不捉鬼、不割席、不分化、不篤灰，兄弟爬山，保持良知，回饋社會).”

Ukrainian supporters also attended the rally. A Ukrainian supporter came to the stage with a young child in his arms, expressing his support for both Ukraine and Hong Kong’s struggle for freedom. They are here today not only for themselves, but also for the next generation. After hearing that, some participants chanted “Stand with Ukraine” and “Stand with Hong Kong.”

The host also emphasised that “It has been three years since “612.” Do not think about what demands you can ask the incompetent Hong Kong government. We should instead express the demands of Hong Kong people to the local people in the UK and help them understand how to prevent the CCP from affecting their lives.”

US to Combat Increasing Cyberattacks, Especially From China 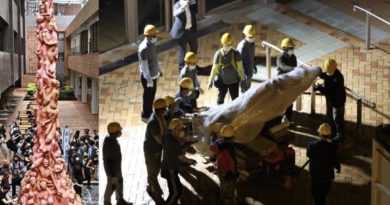