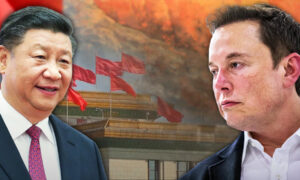 China’s military ban on Tesla vehicles could be part of the Chinese Communist Party (CCP)’s recent tough diplomatic stance against the United States, and can also be used to limit Tesla’s expansion in China to boost local brands, according to two China experts.

A March 19 notice about Tesla vehicles being banned by China’s army was circulated on Chinese social media, but soon got deleted.

It says, “Upon inspection and actual testing, Tesla brand vehicles are found to be equipped with a series of technical devices such as omnidirectional cameras, ultrasonic sensors, etc. These devices can expose the location of the target. In order to ensure the absolute safety of military secrets, and to prevent potential threats, vehicles of this brand are prohibited from being driven into or parking at the [military] staff and family building compounds. We will also conduct routine inspection of vehicles inside the compounds and hope that every household will cooperate.”

The Wall Street Journal confirmed that the Chinese regime is restricting the use of Tesla vehicles by military staff and employees of important state-owned enterprises. The data collection ability of the vehicles is the main concern and was reviewed as a national security threat, according to unnamed people familiar with the matter.

The source told The Wall Street Journal that Chinese officials believe that cameras in Tesla vehicles can record images and obtain data including when, how, and where the vehicles are being used, as well as the contact lists of mobile phones synced to them. Beijing is concerned that some data could be sent back to the United States.

A Tesla representative told Bloomberg that none of the in-car cameras in Teslas sold in China are turned on or part of the Full Self-Driving (FSD) beta trial and that Tesla’s privacy policies comply with national laws and local regulations in China.

Tesla’s CEO Elon Musk also responded to the security concern on March 20 at the China Development Forum. He said, “If Tesla uses its cars to spy in China, we’re going to have to shut down and go out of business. So we have a strong motivation to ensure users’ privacy.”

Current affairs commentator Shi Shan told The Epoch Times that the security concerns about Tesla are just an excuse for the CCP.

“These Tesla features did not just become available now, and the so-called ‘threat’ did not just emerge today. Why wasn’t the Chinese Communist Party worried before? Why did the CCP only raise this issue now? It is obviously part of the CCP’s recent tough diplomacy on display.”

Mike Sun, a private investment consultant in the United States, told The Epoch Times that the purpose of the CCP bringing in Tesla is just like what they did to the iPhone. They will use Tesla and Apple technology and industrial chains to support China’s local manufacturing industry.

Tesla entering into the Chinese market has driven the development of China’s local electric vehicle brands such as NIO, Li Xiang One, and XPeng (also Xiaopeng Motors).  Now that these manufacturers have matured, the CCP does not want Tesla to continue to grow and expand.

According to Tencent, Hangzhou-based Geely Auto Group will soon launch a high-end electric car brand Zeekr to take on its major competitor Tesla.

According to Tesla’s filing with the U.S. Securities and Exchange Commission (SEC), Tesla’s revenue in China reached $6.662 billion last year, an annual increase of 123 percent, accounting for 21.12 percent of Tesla’s global revenue, second only to 48.22 percent in the U.S. market.

According to Geely’s figures released on Jan. 6, Geely’s total sales volume last year was 1.32 million cars, making it the best-selling Chinese passenger car brand for four consecutive years. However, Geely’s new energy vehicles did not perform as well as expected, with a total sales of 68,000 last year, a plunge of nearly 40 percent from 2019.

In addition to Geely, NIO, Xiaopeng and Li Xiang One are also starting to close in on Tesla. Although the combined sales of these three electric car companies in China were only 19,000 units last December, still lower than Tesla’s performance of over 23,000 units, all three companies’ sales increased by more than 100 percent compared to the same period in 2019.

The New York Post reported on March 20 that although Tesla has made significant progress in China in recent years, with sales of more than 147,000 units in the country in 2020, the market will become increasingly competitive as local Chinese brands, such as NIO and Geely, continue to cut into the sales.

China May Impose an ‘Economic Blockade’ on Taiwan to Force Submission: Experts