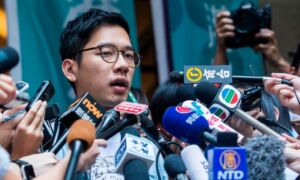 The latest sales of shares of pro-Beijing Phoenix TV suggest that Beijing is accelerating its pace in taking full control of Hong Kong’s media outlets.

On April 17, Phoenix TV announced that its founder Liu Changle, also its former chairman and major shareholder, had sold almost all his stake in the company, namely 37.93 percent of the total, including 21 percent (equivalent to $82.4 million) to Bauhinia Culture Holdings Limited and 16.93 percent (equivalent to $66.4 million) to Shun Tak Holdings.

Public data shows Bauhinia Culture is a Beijing-backed group, with Mao Chaofeng as its chairman and party chief since March 3, who was the former executive vice governor of southern China’s Hainan province.

A Hebei media professional with a surname Song told Radio Free Asia (RFA) that the next trend for Hong Kong media outlets would be more “centralized,” meaning all private Hong Kong media agencies, including publishing houses, would be subjected to unified management as it is in the mainland.

On April 19, Huang Yongqiang, an independent media professional in China, expressed in an interview with RFA that the share sales signaled the CCP’s harsher grip over Hong Kong media.

Huang suggested that was not an isolated incident.

“The two new officials—chairman and CEO—both come from within the Chinese Communist Party (CCP) regime, following Liu’s withdraw from the management in February of this year. Obviously, the CCP’s strategy was: completely root out the influence of Liu and his family from Phoenix TV through deprivation of the right of management and change of stake. They want to keep the group more firmly in their own hands,” he said.

Currently, Phoenix TV remains one of the largest Chinese-language broadcasters, having amassed a global audience of 360 million viewers across six channels, according to its website.