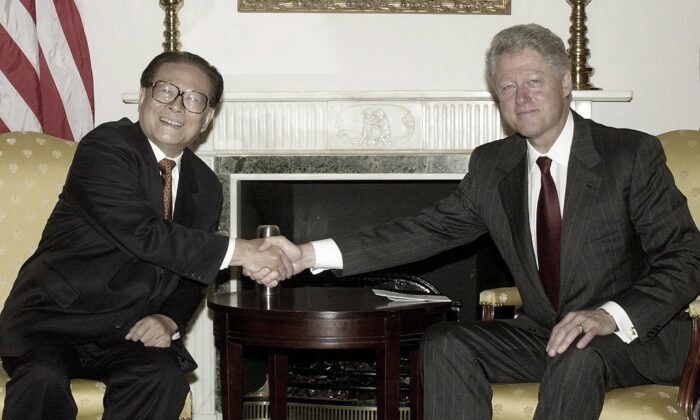 Immediately following the death of former Chinese Communist Party leader Jiang Zemin, numerous Western media outlets began to laud his efforts to open the Chinese economy to the outside world and create a “global economic juggernaut.”

They cited rapid economic growth throughout a decade of his leadership in the post-Tiananmen era as evidence of his accomplishment. However, little is said about how China’s meteoric growth came at the expense of Western businesses and workers following its admission to the World Trade Organization (WTO) in 2001.

According to the World Bank, China’s economy has grown by more than 1,200 percent (in today’s U.S. dollar terms) since joining the WTO, making it the world’s second-largest economy, the largest exporter, and the dominant industrial power.

Jiang, who served as the communist regime’s top leader from 1993 to 2003, frequently bragged about his role in enrolling the country in the WTO.

However, the growth of trade relations with China has been particularly devastating to American workers. Beginning in 2009–2010, Chinese manufacturing production surpassed that of the United States, and the gap has since grown even wider, costing millions of U.S. manufacturing jobs.

The Economic Policy Institute (EPI), for example, estimated that the growth of the U.S. trade deficit with China eliminated 3.7 million U.S. jobs between 2001 and 2018.

Although some may regard Jiang as a hero, “he was not good for America or the rest of the free world,” according to Clyde Prestowitz, a former presidential advisor who led the first U.S. trade mission to Beijing in 1982.

Jiang “negotiated masterfully to get China into the WTO and used the WTO as a disciplinary element in revitalizing the Chinese economy,” Prestowitz told The Epoch Times.

“His great accomplishment was in using the WTO debate to convince the West that China was taking the capitalist, free trade road, while, in fact, making the WTO a tool of China’s state-driven industrial policy.”

Bill Clinton, who was president at the time, brokered China’s accession to the WTO in 2001. He told the American public that the move meant the regime would “import one of democracy’s most cherished values, economic freedom,” which would “have a profound impact on human rights and liberty” in China.

But the warm relations with the regime began even before the Clinton administration. President Richard Nixon was the first sitting American president to visit mainland China in 1972. Successive administrations encouraged U.S. trade relations with China, in hopes that globalization would bring about democratic reforms in the communist country.

However, China has not lived up to its obligations on fair trade over the last two decades—and has little desire to do so.

China’s rise “came at the expense of Western democracy, security, and common sense,” according to Keith Krach, former undersecretary of state, and chairman of the Krach Institute for Tech Diplomacy,

“We all too often turned a blind eye and shied away from talking directly about their lack of transparency, reciprocity, and environmental standards; their human rights abuses and use of slave labor; and their countless violations of prior agreements and international law,” he told The Epoch Times.

Many observers agree with Krach that Beijing is guilty not only of incidental violations of its membership terms, but also of a general attitude to trade and labor that runs counter to the WTO’s rules and founding principles.

Last year, the Information Technology and Innovation Foundation published a paper titled “False Promises II,” explaining the gap between China’s WTO commitments and its practices over the past two decades.

For example, China pledged to WTO members that its authorities would not influence the business decisions of state-owned enterprises (SEOs), either directly or indirectly. That has not been the case, according to the report. All SOEs or private Chinese enterprises, according to domestic law, have a Chinese communist party cell that has influence over the management of companies.

Furthermore, the growth of the SOE sector both in market valuation and in total numbers is a clear example of China breaking the WTO rules, according to the ITIF.

Other areas of violation of WTO norms include massive government subsidies and forced technology transfer and joint venture requirements.

“As the result of our naivety, we handed over priceless intellectual property by allowing access to our most prized research institutions. We also gave them sophisticated process engineering for some of our most valuable products and technologies by building state-of-the-art plants in China,” Krach explained.

The United States, over time, became dependent on China “by outsourcing manufacturing which enabled them to ransack small- and medium-size firms in the industrial Midwest with their weapons of mass production,” he added.

Chinese corporations have openly misappropriated the intellectual property of foreign competitors, a behavior that has only become worse in the face of the outcry against it. In every sector, from biotechnology to aerospace to telecoms, China is engaged in state-sanctioned IP theft, according to the ITIF.

While Chinese corporations face low barriers to doing business in the United States and Europe, Western firms are not particularly welcome in China due to the country’s unfair protection and financial favoritism for its SOEs.

In China, domestic companies have better access to capital and raw materials, according to observers. Differentiated treatments also include government protections over legal disputes, bank loans, and subsidies. As a result, foreign companies operating in China face a competitive disadvantage.

“On top of that, we permitted them into our low-cost capital markets without having to comply with standard accounting practices or the ability to be audited which financed their surveillance state and military buildup,” Krach said.

For more than a decade, Chinese companies have taken advantage of U.S. capital markets while operating under lax standards.

The U.S. government has taken steps in the last two years to enhance oversight of U.S.-listed Chinese companies.

During his term, Jiang significantly influenced China’s economic and political relationship with Taiwan, which continues to this day.

On the economic front, trade between China and Taiwan increased at an unprecedented rate during his tenure.

According to Hammond-Chambers, this was part of a strategy to control the self-governing island through economic interdependence, and Jiang developed it more fully.

And on the political front, the popularity of Taiwan’s then-president Lee Teng-hui plummeted in Beijing during Jiang’s initial term.

A crisis erupted between China and Taiwan when Lee visited the United States to attend his graduate school reunion at Cornell University. The decision to grant Lee a U.S. visa overturned more than 25 years of U.S. diplomatic precedent.

This sparked the subsequent missile crisis in 1995 and 1996, Rupert noted.

“A demonstration of PRC pique. The U.S. put several battle groups in the area of Taiwan and China’s military backed down,” he said, using the acronym for the regime’s official name, the People’s Republic of China.”

The incident is viewed as the beginning point for the modernization of the Chinese military, an effort to ensure that the People’s Liberation Army is not put in a similar position in the future.

China-Taiwan relations have not changed significantly in the 25 years since that incident, according to Hammond-Chambers.

“It’s a tale of two stories: Economic convergence coupled with an uptick in political and military tensions concerning Taiwan’s sovereignty. The contradiction in the two situations stands true today.”

Cathy He, Rita Li, and Michael Washburn contributed to this report.

Emel Akan writes about business and economics. Previously she worked in the financial sector as an investment banker at JPMorgan. She graduated with a master’s degree in business administration from Georgetown University. 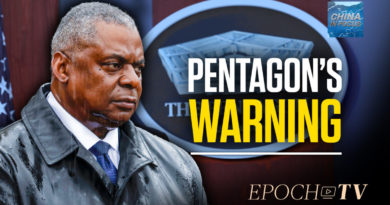