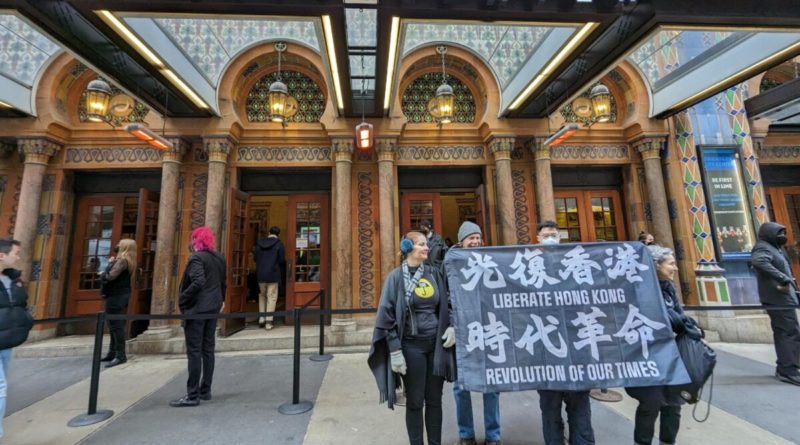 
A group of activists protested in front of a theater in New York, where the Hong Kong Ballet was performing as part of its U.S. tour. They warned audience members that the show was part of the CCP’s United Front work.

The Hong Kong Ballet performed “Romeo and Juliet” in New York’s New York City Center on Jan. 13 and 14. The Consul General of the China Consulate in New York and the head of the Hong Kong Economic and Trade Office (HKETO) attended a reception before the opening performance.

According to reports from Chinese state-run media, China Press, and Sing Tao Daily, the performance was a success. However, what the two medias did not report is that a group of Hongkongers residing in New York and other areas of America held up banners and distributed leaflets outside the theater reminding the audience to be cautious about the CCP’s cultural United Front work.

Hong Kong Ballet’s tour is the largest overseas arts exchange tour since the beginning of the pandemic. The show places the story of Romeo and Juliet in the context of Hong Kong’s fashionable 1960s, drawing on Shakespeare’s masterpiece to inspire a new perspective on Hong Kong.

Before the opening of the performance, a group of Hongkongers and pro-democracy activists handed out “a letter from the Hongkongers residing in the U.S.: Love ballet, but not propaganda” to audience members, in a bid for them to understand the current Hong Kong situation.

The letter states, “HKETO sponsors the show, and the Hong Kong government is currently manipulated by the Chinese Communist Party (CCP).”

Outside the theatre, Nicole, who distributed leaflets, told The Epoch Times that they were not against Hong Kong ballet, but they thought that “if people are enjoying the ballet performance in New York, they should also understand what is currently happening in Hong Kong.”

“If a performance can represent a city, a country, or a place, and human rights violations are happening there, New Yorkers should understand that it is not as simple as going to a beautiful ballet,” said Nicole.

After the anti-extradition movement, the U.S. government sanctioned a dozen Hong Kong governmental officials. In July 2022, after examining the human rights situation in Hong Kong, the United Nations Human Rights Committee urged the Hong Kong authorities to repeal the Hong Kong National Security Law because it is, by its very legal nature, an infringement of human rights in Hong Kong.

On Dec. 15, 2022, U.S. Sen. Marco Rubio (R-Fla.) and U.S. Rep. Chris Smith (R-N.J.) together introduced the Hong Kong Economic and Trade Office (HKETO) Certification Act and requested the US government to terminate HKETO’s operations and every extension of privileges.

Its press release said that HKETOs operate as official representative offices of the Hong Kong Special Administrative Region to the United States. HKETOs were granted these privileges under the assumption Hong Kong would remain free from the Chinese Communist Party’s authoritarian grip. However, that reality changed following the imposition of Beijing’s 2020 National Security Law in Hong Kong.