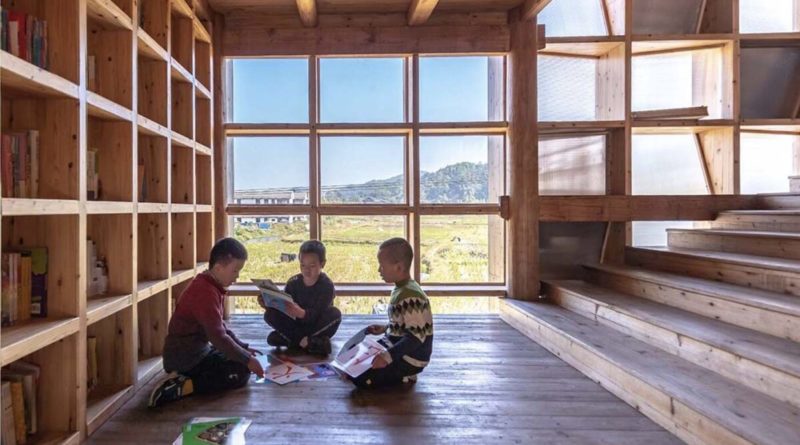 
A children’s library designed and built by the School of Architecture of the Chinese University of Hong Kong (CUHK) has received the “World Interior of the Year Award” and the “Best Use of Natural Light Prize” at the World Architecture Festival” (WAF) recently, often referred to as the Oscars of architecture.

Opened in late 2021, the library is called “Pingtan Children’s library,” located in the primary school courtyard of more than 400 students in a Dong minority village, Pingtan township, Hunan province, China.

Rather than a building with floors and rooms, it consists of two interwoven spiral staircases, a double helix that becomes both the vertical circulation and the seating for the children.

As a building typology, the library follows the traditional Dong house, with a tiled pitch roof and a mortise and tenon timber construction system of interlocking columns and beams.

It sets a new paradigm for rural village libraries in China, as it is a place where kids read, play, and explore.

The project leader, Professor W. Ferretto said the entire project was built with a single donation from a charitable fund of HK$600,000 (approx. US$ 77,177).

This shows that social impact does not require large financial investment, and good design is not limited to high-end projects. He also mentioned that architecture must have a purpose.

WAF judges applauded the “deep level of personal engagement and local traditions of crafts and construction” of the project.

WAF is one of the most prestigious architectural prizes in the world. The 2022 World Architecture Festival received 772 entries from more than 50 countries.

The “Pingtan Children’s Library” was awarded the “World Interior of the Year,” one of the event’s four highest accolades, and the “Best Use of Natural Light Prize.”

In addition, the “Pingtan Children’s Library” has previously won the Grand Award at the DFA Design for Asia Awards 2022 and a “Highly Commended Award’ at the Dezeen Awards 2022” in the Cultural Building category.