Florida may soon cut ties with China as the state is currently reviewing its investments in Chinese companies, including those of its retirement system.

U.S. pension holders and retirees unwittingly invest in companies that are tied to the Chinese communist regime and Gov. Ron DeSantis in December took action to stop Floridians’ money flowing into these firms.

DeSantis ordered a review of Florida Retirement System investments to determine how much has been invested in Chinese companies. Florida state’s pension plan is one of the largest public retirement plans in the United States and three-quarters of its total assets are managed by the State Board of Administration (SBA).

Following DeSantis’s order, the SBA has started the audit process, according to the governor’s spokesperson Christina Pushaw.

There’s no clear timeline for the conclusion of the review, “but the legislative session ends March 11, and it’s likely we will have an update to share before that,” Pushaw told The Epoch Times.

In June last year, Biden signed an executive order, extending a Trump-era ban that prohibits U.S. investors from investing in Chinese military companies. Many of these companies are publicly traded on stock exchanges around the world and are tracked by major indexes such as MSCI and FTSE.

DeSantis cited the non-transparent nature of Chinese companies and their potential involvement in human rights abuses committed by the Chinese Communist Party (CCP).

“The elites in America for a generation have created this big monster,” DeSantis said.

Florida also revoked the state pension fund’s proxy voting authority that has been given to outside fund managers, like BlackRock. DeSantis accused them of pursuing ideologies inconsistent with the state’s values and its financial interests.

His announcement came after a consumer advocacy group in December sent a letter (pdf) to the governors of the top 10 states with the most pension dollars invested in BlackRock. The asset management giant has come under fire in the last year for its investments in China. 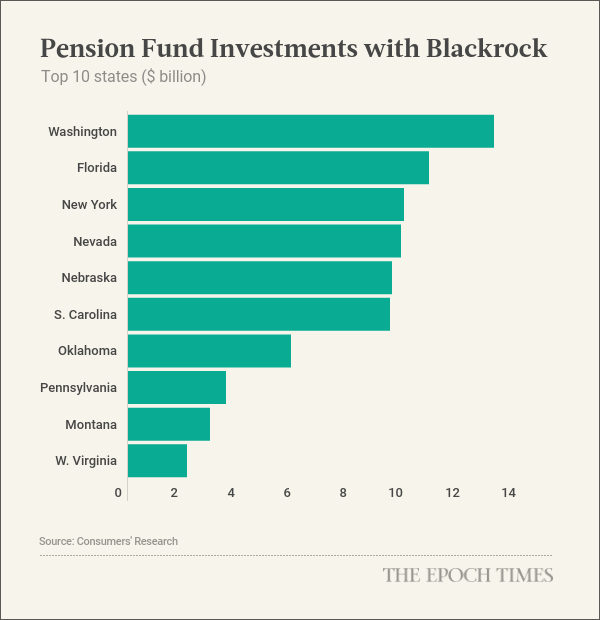 “We urge elected officials to do their due diligence in educating themselves and their staff on the multiple risks posed by BlackRock’s extensive investments in Chinese companies, both from an ethical standpoint as well as the fiduciary responsibility owed to U.S. pension holders and retirees,” William Hild, executive director of Consumers’ Research wrote in the letter to the 10 governors, including DeSantis.

Washington state tops the list with $13 billion of state pension funds invested in BlackRock, according to a Consumers’ Research report (pdf), followed by Florida ($10.7 billion) and New York ($9.8 billion).

BlackRock and several big U.S. asset management funds have been criticized for investing in shares of Chinese companies that support the CCP’s military and security apparatuses, and help its human rights abuses.

According to the report, BlackRock has significant investments in companies that bolster the Chinese military’s technological buildup, including Tencent, Semiconductor Manufacturing International Corporation, China Telecom, and China SpaceSat.

The asset management firm has also invested in two companies, Hikvision and iFlytek, that are blacklisted by the U.S. government for human rights abuses against Uyghurs in the far-western Xinjiang region of China, the report states. Hikvision is one of the world’s largest surveillance equipment manufacturers, and iFlytek is China’s leading artificial intelligence company.

However, BlackRock has pushed back on these criticisms, stating that its obligation is to manage assets consistent with its “clients’ objectives and choices.”

“Stakeholder capitalism is not about politics. It is not a social or ideological agenda,” Larry Fink, chairman and CEO of BlackRock, said in his 2022 letter to CEOs in January.

“It is not ‘woke.’ It is capitalism, driven by mutually beneficial relationships between you and the employees, customers, suppliers, and communities your company relies on to prosper. This is the power of capitalism.”

In January, West Virginia also decided to cut ties with BlackRock over its investments in China and its environmental, social, and governance strategy that harms fossil fuel companies.

State Treasurer Riley Moore said on Jan. 17 in a statement on Twitter that “Any company that thinks Communist China is a better investment than [West Virginia] energy or American capitalism clearly has a bad strategy.”

Emel Akan is White House economic policy reporter in Washington, D.C. Previously she worked in the financial sector as an investment banker at JPMorgan and as a consultant at PwC. She graduated with a master’s degree in business administration from Georgetown University.