High inflation has harassed the world for over a year. It’s troubling that although the financial market has come down significantly, against a backdrop of aggressive interest rate hikes, the latest economic figures show that a recession is not imminent–especially as both non-farm payroll and unemployment rates are still very healthy.

This means that rate hikes will not end soon. Moreover, there is a high chance that the Federal Reserve (Fed) will overdo it on interest rates, because the policy effect has a 1.5 to 2 year lag, meaning it will not be realized until fall of 2023.

Thus, whether the Fed misjudged the medium-term (1.5 to 2 years ahead) inflation outlook again is the key concern. Given the policy effect has a time lag, inflation should, in principle, have peaked. It should come down soon, as broad money (M2) growth slowed down sharply starting in April 2021—already more than 1.5 years ago. However, the uncertainty of this kind of lead-lag relationship is high, so it’s hard to predict accurately when inflation will decline. Moreover, the expected falling speed of inflation is not tightly correlated with that of M2.

So far, inflation has not slowed much from its peak. As the accompanying chart shows, energy inflation, as represented by the year-over-year change in oil prices, has slumped from 270 percent to 12 percent. Further, core inflation, whether measured by consumer price index (CPI) or personal consumption expenditures (PCE), has little motion.

This scenario offers two possibilities: First, inflation is more demand-side driven than supply-side, so that even if commodity disinflation happened, it would not drive down core inflation. Second, inflation expectations might run out of control. 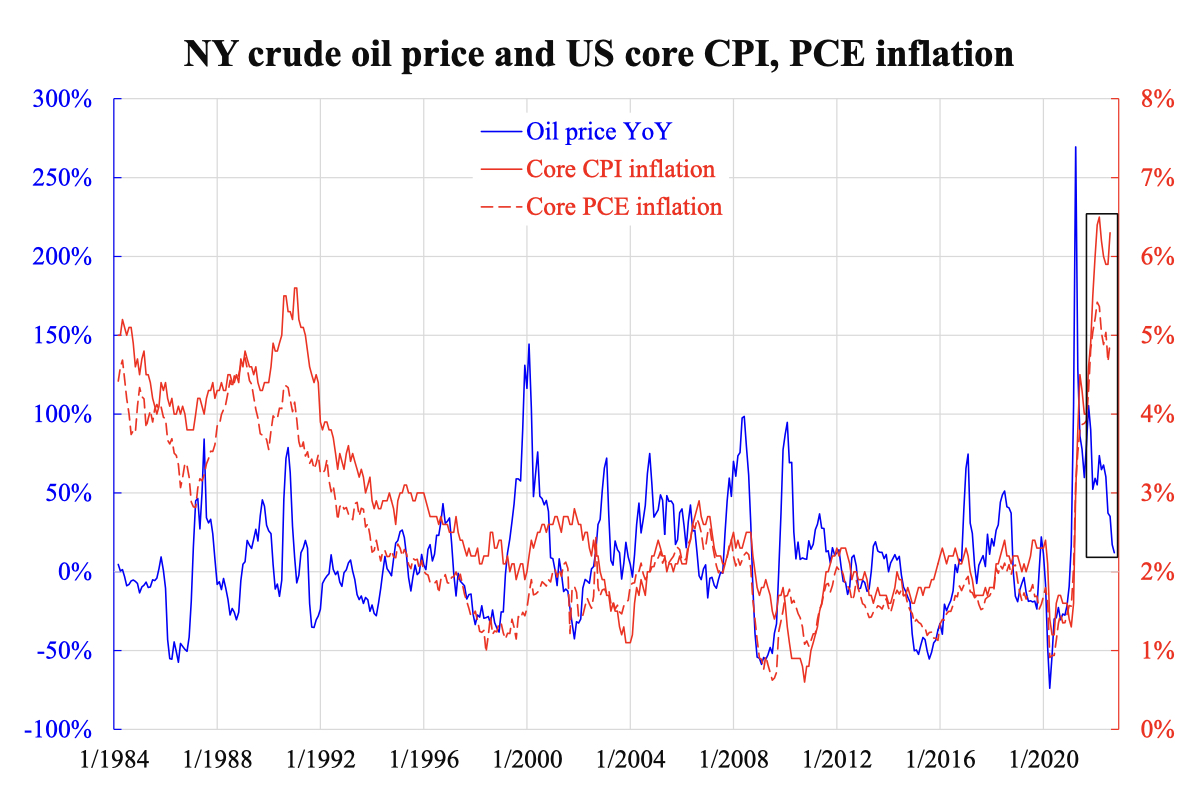 Which factor is in play, and to what extent, is not easily determined, given such a short period of data. However, in either case, monetary tightening is needed.

While tightening is useless in tackling supply bottlenecks, it certainly retards demand, because opportunity cost matters. If the interest rate is high enough, people tend to save, gaining interest to partially cover the diminished purchasing power of money—holding on to their money instead of consuming it immediately. And when people know the Fed is acting firmly, their expectations of inflation will ease. Thus, tightening can solve both demand and inflation.

It seems that this time, the Fed ultimately recognized the source of inflation. However, a 3 to 4 percent interest rate paid cannot cover a 5 to 8 percent purchasing power loss. Even though core inflation will edge towards 4 to 5 percent, a policy interest rate lower than that cannot be regarded as serious tightening. And without this, labor and other markets will not cool down, as the latest job numbers—including wage inflation—confirm.

Though the Fed now knows the correct path, acting too late already poses another risk: Prolonged high inflation can lead to persistently high inflation expectations. When this happens, a prolonged tightening policy is needed to alter the course.

It has been only seven months since the beginning of the rate hike cycle, which the market found it hard to tolerate. One can imagine the road ahead!

Law Ka-chung is a commentator on global macroeconomics and markets. He has been writing numerous newspaper and magazine columns and talking about markets on various TV, radio, and online channels in Hong Kong since 2005. He covers all types of economics and finance topics in the United States, Europe, and Asia, ranging from macroeconomic theories to market outlook for equities, currencies, rates, yields, and commodities. He has been the chief economist and strategist at a Hong Kong branch of the fifth-largest Chinese bank for more than 12 years. He has a Ph.D. in Economics, MSc in Mathematics, and MSc in Astrophysics. Email: lawkachung@gmail.com