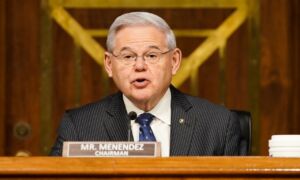 A bipartisan U.S. congressional push to counteract China picked up steam on Wednesday as a Senate committee overwhelmingly backed a bill pressing Beijing on human rights and economic competition and other lawmakers introduced a measure seeking billions for technology research.

The Senate Foreign Relations Committee backed the “Strategic Competition Act of 2021” by 21-1, sending the bill for a vote in the 100-member Senate, even as they voiced a need to do even more to counteract Beijing.

Separately, a group of Senate and House of Representatives lawmakers introduced the “Endless Frontier Act,” calling for $100 billion over five years for basic and advanced technology research and $10 billion to create new “technology hubs” across the country.

Both bills have strong support from both political parties and are expected to eventually become law. The desire for a hard line in dealings with the Chinese regime is one of the few truly bipartisan sentiments in the deeply divided U.S. Congress, which is narrowly controlled by President Joe Biden’s fellow Democrats.

The Biden administration supports many provisions of the measures.

“This is a challenge of unprecedented scope, scale and urgency, and one that demands a policy and strategy that is genuinely competitive,” said Senator Bob Menendez, the Democratic chairman of the Senate panel.

He and Senator Jim Risch, the panel’s top Republican, wrote the “Strategic Competition” measure together, with Risch telling members it was “truly bipartisan.”

The 280-page Senate bill addresses competition with the Chinese regime through efforts such as increasing international development funding. It pushes humanitarian and democratic values, like imposing sanctions over the treatment of the minority Muslim Uighurs and supporting democracy in Hong Kong.

It would expand the scope of the Committee on Foreign Investment in the United States (CFIUS), which scrutinizes financial transactions for potential national security risks.

The two measures are part of a fast-track effort announced in February by Democratic Senate Majority Leader Chuck Schumer to pass a wide range of legislation to counter Beijing. Schumer is a lead sponsor of the Endless Frontier bill.

Foreign Relations Committee members said they want to do more.

“I don’t believe anyone would think that this legislation is going to change China‘s march toward a global hegemony of autocracy and repression,” Republican Senator Mitt Romney said. “…I would suggest we have a lot more work to do.”

Eric Sayers, who studies technology policy and U.S. defense strategy in the Asia-Pacific at the conservative-leaning American Enterprise Institute, called the legislation an important part of efforts to address challenges posed by the Chinese regime.

The proposed spending builds on earlier legislation “taking a bold step in the technology competition with China through investing in our domestic competitiveness and building new resilience in our supply chains,” Sayers said.

By Patricia Zengerle and Michael Martina

The Return of the Cold War?