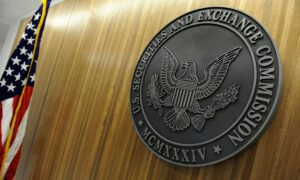 The top U.S. securities regulator on March 24 adopted measures that would kick foreign companies off American stock exchanges if they do not comply with U.S. auditing standards, and require them to disclose any governmental affiliations.

The Holding Foreign Companies Accountable Act, signed into law by then-President Donald Trump in December, is aimed at removing Chinese companies from U.S. exchanges if they have fail to comply with American auditing standards for three years in a row.

The rules also require firms to prove to the SEC they are not owned or controlled by an entity of a foreign government and to name any board members who are Chinese Communist Party officials, the SEC said in a statement.

The agency fast-tracked the rules around how companies should submit documentation because it was required to issue them within 90 days of the Act becoming law.

The SEC is now seeking public comments on a process for identifying companies that fail to meet the standards.

The new rules come amid simmering tensions between the United States and China, with bipartisan support for a tough U.S. approach.

Last week in Alaska the two countries held their first high-level meeting under President Joe Biden’s administration, with both sides leveling sharp rebukes of the others’ policies.

A flurry of 11th-hour efforts under the Trump administration led to dozens of Chinese companies being delisted from U.S. exchanges and over-the-counter trading platforms in recent months over allegations of Chinese military affiliations.

The SEC said it was still actively assessing how to roll out the rest of the law’s requirements, including the identification process and trading prohibition requirements.