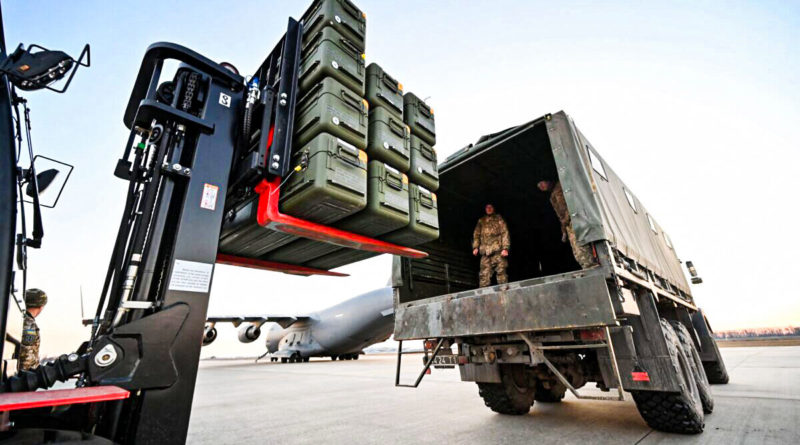 
The United States would likely run out of critical munitions during a major conflict with China’s communist regime due to its inability to adequately mobilize the defense industrial base, according to a new report.

The report, titled “Empty Bins in a Wartime Environment,” examines how the United States has depleted key arms reserves by supplying Ukraine’s resistance against Russian invasion, and extrapolates how a similar situation could negatively impact the nation in a wartime scenario.

“The U.S. defense industrial base is not adequately prepared for the competitive security environment that now exists,” says the report published on Jan. 23 by the Center for Strategic and International Studies (CSIS), a security-focused think tank.

“In a major regional conflict—such as a war with China in the Taiwan Strait—the U.S. use of munitions would likely exceed the current stockpiles of the U.S. Department of Defense (DoD), leading to a problem of ‘empty bins.’”

“Empty Bins” follows closely behind the release of results from CSIS wargames, which found that the United States would suffer from low levels of vital munitions in a war with China over the continued de facto independence of Taiwan.

That wargame found that Japan and the United States could likely defeat an invasion of Taiwan by communist China, but only at great cost in lives and materiel. In such a conflict, the United States would likely run out of long-range anti-ship missiles (LRASMs) early on.

“The problem is the U.S. has such low stockpiles for those long-range anti-ship missiles that in our wargames, in multiple iterations of the wargame, we run out [of LRASMs] in less than a week virtually every time,” said Seth Jones, the author of “Empty Bins,” in an associated video.

“We cannot fight in that case in protracted war because we don’t have sufficient supply of munitions.”

US Unprepared for a Major War

The United States’ ill-preparedness for a conflict with communist China has long been a point of contention among lawmakers and defense policy experts.

Back in 2021, for example, Rep. Mike Gallagher (R-Wis.) warned that the United States would “probably lose” a war for Taiwan, and noted trends in wargames over the past several years in which the United States regularly lost to China in simulated invasions of Taiwan.

“Empty Bins” adds further context to the issue by analyzing how the United States has rapidly depleted critical munitions through its support of Ukraine, noting that the nation’s stockpiles of Stinger surface-to-air missiles, 155-millimeter howitzers and ammunition, and Javelin anti-tank missile systems have plummeted.

The report notes that the United States has sent more Stinger missiles to Ukraine in the last year than have been built for all non-U.S. customers over the last 20 years. Likewise, the nation has delivered more than 1 million 155-mm artillery rounds to Ukraine, and only placed orders to replace a fraction of that amount.

“More broadly, the war in Ukraine has demonstrated that competition and conflict between major powers will require a strong industrial base in the United States and in key ally and partner countries,” the report says.

“The effort to deploy, arm, feed, and supply forces is a monumental task, and the massive consumption of equipment, systems, vehicles, and munitions requires a large-scale industrial base for resupply.”

Thus, the report says, the problem is not that the United States is providing support to Ukraine, as a defense of Taiwan would draw largely on different kinds of munitions and weapons platforms. Instead, the problem rests in the United States’ sluggish procurement processes and lack of a robust defense industrial base for munitions manufacturing.

The Javelin surface-to-air missile system, for example, requires a production lead time of approximately 30 months. This means that, if the United States were to order new units of the system today, it would take more than two years before they were in the hands of the military.

Notably, such slow estimates are what is achievable in peacetime. During war, procurement could take much longer when supply chains are disrupted and vital components like rare earth elements are scarce.

“These shortfalls would make it extremely difficult for the United States to sustain a protracted conflict—and, equally concerning, the deficiencies undermine deterrence,” the report says.

“They also highlight that the U.S. defense industrial base lacks adequate surge capacity for a major war.”

To that end, the report recommends creating a “break-glass” plan in which the government could streamline industrial production, acquisition, and deployment in wartime.

Similarly, the report suggests that the United States create a strategic munitions reserve that would include subcomponents with long production lead times, like metals and electronics.

Only by shoring up its defenses and rebuilding its stockpiles now, the report says, can the United States deter or win a conflict later.

“With growing competition between the United States and China—along with continuing threats from Russia, Iran, North Korea, and terrorist groups—the U.S. military needs to be prepared to fight at least one major war, if not two.”