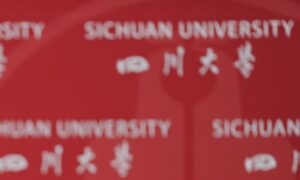 SHENZHEN, China—American author and New Yorker writer Peter Hessler has said the Chinese university where he has been teaching non-fiction writing has not renewed his contract for the next academic year and that he will leave the country at the end of the semester.

Since 2019, Hessler has been based in the city of Chengdu, where he is an assistant professor at the Sichuan University-Pittsburgh Institute. He has been a staff writer with the New Yorker since 2000.

In a statement shared via social media platform Douban on Sunday, he said that he had hoped to continue teaching at the university but was not offered a contract for the next academic year. Reached by Reuters, Hessler said he declined to comment beyond the statement.

“I want to emphasize that I have greatly enjoyed being back in the classroom after more than twenty years,” the statement said.

It added that Hessler and his family would return to Colorado in the summer, and did not elaborate on why his contract was not renewed.

Hessler’s friend He Yujia, who posted the statement on his behalf, said it appeared to have been subsequently removed from Douban and she had not been notified.

Minking Chyu, dean of the Sichuan University Pittsburgh Institute, said Hessler has been working under a contract that requires annual renewal.

“His current contract is about to expire at the end of this academic year and Peter and the Institute are unable to reach a mutually agreed new contract going forward. This situation is very common for temporary appointments in the academic community worldwide,” he said in an emailed reply to Reuters on Tuesday.

The Chinese foreign ministry told Reuters on Monday it was unaware of the situation.

The New Yorker and Douban did not immediately reply to requests for comment.

Hessler, 51, has written four well-known books in English on China since he first moved as a U.S. Peace Corps volunteer English teacher in the mid-1990s to a small city in the southwest, which became the basis for his 2001 non-fiction book “River Town”.

Chinese-language translations of three of Hessler’s books on China are available on the mainland, and a New Yorker piece published last August was praised inside the country for its depiction of how China dealt with the COVID-19 outbreak.

In March, Hessler participated in the China Development Forum, a high-profile government-run event, where he spoke on a panel on media perspectives of how the COVID-19 outbreak was handled in Wuhan, the Chinese city where it first emerged.

The Chinese regime has increasingly curbed foreign influence in its education system in recent years, and last year introduced draft rules that would see foreign teachers fired for “words and deeds” considered harmful to the country’s sovereignty.

It has also been clamping down on foreign media, and expelled more than a dozen journalists working for U.S. media organizations in 2020 as relations with the United States plummeted over the coronavirus pandemic, China’s treatment of Uyghurs and a festering trade dispute.