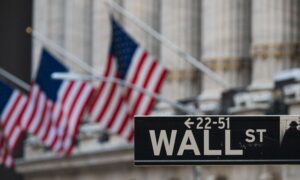 Despite tensions between Beijing and Washington ratcheting up over the last five years, Wall Street firms have steadily increased their business footprint in China while carefully navigating the political whirlwinds.

But recent events involving the two of the most important firms on Wall Street signal that the industry is resolute in making China its most important growth market.

In other words, the die has been cast and there is no turning back.

On May 25, New York-based investment bank Goldman Sachs won approval from Beijing regulators for a 51 percent ownership stake in a wealth management joint venture with the Industrial and Commercial Bank of China (ICBC), one of China’s biggest commercial banks.

Also in May, BlackRock—the world’s biggest asset manager with almost $9 trillion in assets—received approval to set up a wealth management business, of which it will own 50.1 percent, along with its partners China Construction Bank and Temasek, Singapore’s sovereign fund.

Goldman and BlackRock are not the first movers, but their latest expansion into China is the most important. Goldman is perhaps the most preeminent Wall Street investment bank and its foothold in China’s wealth management sector is sure to attract followers. BlackRock, whose chief executive Larry Fink has been bullish on China for years, is considered an innovator among traditional asset managers.

A common thread among these partnerships is wealth management. It is the final (and potentially most lucrative) frontier for Wall Street in China.

How so? Wall Street firms have walked a long road to gain traction in China. Over the last decade, Beijing has slowly opened its financial markets to the West, by first allowing foreign capital to invest in its onshore markets and participate in gains (and losses) and more recently allowing majority owned onshore subsidiaries. China only recently allowed majority foreign ownership of domestic investment banks and brokerage firms, granting Wall Street a cut of the fees arising from underwriting new stocks and bonds. And in late May, China’s central bank raised the limit on how much small lenders and foreign banks operating in China can borrow offshore (e.g. in dollars), which increases the ability of foreign banks to further expand within China.

But Beijing’s loosening of the wealth management industry is a game changer. China is a nation of savers. China’s wave of nouveau riche has a pile of cash to invest. And China’s wealth management market largely depends on retail and digital distribution. Wall Street firms’ Chinese partners would presumably help with the sales and distribution channels.

It gives Wall Street a potentially massive revenue source—earning fees from managing the assets of its large population and growing middle class. In other words, this allows Wall Street to make money off Chinese retail customers. And unlike investment banking fees, these asset management fees are a more stable and recurring source of revenue.

As with any firm operating in China, there are heightened governmental and regulatory risks. And these risks are even greater in the financial industry, where regulatory compliance is so critical to execution of strategy. Even Chinese firms could be severely punished if they cross Beijing authorities, evidenced by fintech giant Ant Group’s sudden cancellation of its initial public offering late last year.

Wall Street could be put in conflict between China and the United States, especially as their operations in the world’s No. 2 economy become a sizable portion of their business. The Chinese Communist Party (CCP) could hold powerful influence over Wall Street if relations between the United States and China continue to deteriorate. Wall Street’s powerful lobbies in Washington could be mobilized to indirectly aid China’s interests if the Wall Street firms’ Chinese businesses are sufficiently threatened.

Over the last few months, fashion and apparel conglomerates that discontinued use of Xinjiang cotton due to mistreatment of the Uyghur ethnic group, were publicly reprimanded by China and Chinese consumers on social media, impacting their Chinese sales revenues. Also in late May, actor and former professional wrestler John Cena issued a public apology to China after he named Taiwan as a country in a previous interview with Taiwanese journalists. His comments, which were widely criticized in China, could negatively impact the box office sales of the upcoming Universal Pictures film “Fast & Furious 9.”

These incidents, while unrelated to the financial services industry, are examples of the ongoing conflicts foreign companies face while operating in China. For example, Beijing could induce Chinese customers to pull assets from foreign wealth managers if the parent company executives acted in a way that was perceived to be “offensive” to the CCP.

There’s another longer-term risk to the United States. Given the pipeline of Wall Street executives who eventually hold high level posts in U.S. government after they leave their posts, the years of collaboration with China and the CCP could indirectly influence their later political decision-making.

Biden’s DOJ Is Distracting Americans From CCP Influence in US