The leaders of China and Russia met in person on Sept. 15 to discuss regional security issues and further explicate their ambitions to counter U.S. influence abroad.

It was the leaders’ first meeting since February and the first since Russia invaded Ukraine.

China has refrained from condemning Russia’s war against Ukraine or calling it an “invasion,” and has parroted Russian propaganda that the war was provoked by the United States—something for which Putin expressed gratitude on Thursday.

“We highly value the balanced position of our Chinese friends when it comes to the Ukraine crisis,” Putin said.

Two Regimes Against the West

The two leaders sealed a “no limits” partnership between China and Russia in February that has caused anxiety about geopolitical tensions in the West. Putin used the recent meeting to double down on that arrangement by throwing his weight behind the CCP’s most contentious policy disagreements with the rest of the world.

Putin said that Russia would support the CCP’s so-called One China policy, which states that Taiwan is an inalienable part of China, and lambasted U.S. “provocations” in the Taiwan Strait—an apparent reference to House Speaker Nancy Pelosi’s (D-Calif.) visit to the island last month.

“We intend to firmly adhere to the principle of ‘One China,’” Putin said.

Taiwan has been self-governing since 1949 and has never been controlled by the CCP. The island nation does not maintain formal diplomatic ties with the United States, but the two powers are important trade partners. The United States is legally bound to supply Taiwan with the arms necessary to defend itself from foreign aggression, including by China.

The two leaders also reaffirmed their fledgling anti-Western alliance and dedication to creating a multipolar world in which the United States is not the sole superpower.

For Putin, that alliance also means that China’s continued support will ensure Russia is not isolated, despite the harshest economic and diplomatic efforts of the West. For Xi, it helps to solidify Chinese leadership over the burgeoning, anti-Western bloc just a month before the CCP’s 2oth National Congress, in which he is expected to secure a historic third term.

“Attempts to create a unipolar world have recently taken an absolutely ugly shape,” Putin said. “They are absolutely unacceptable for the vast majority of countries on the globe.”

Likewise, Xi said that with Russia’s support, China is ready to “play a leading role to take the rapidly changing world on a track of sustainable and positive development.”

The comments echoed similar sentiments made by Chinese and Russian diplomats in recent days that the two regimes would seek to transform the international order.

“The Chinese side is willing to work with the Russian side to continuously implement high-level strategic cooperation between the two countries, safeguard common interests, and promote the development of the international order in a more just and reasonable direction,” said CCP Politburo member Yang Jiechi in a statement earlier in the week.

The meeting drew outrage from U.S. legislators such as Sen. Marsha Blackburn (R-Tenn.), who condemned the meeting as an attempt to form an anti-Western axis.

“President Xi and Putin are seeking a new global order that directly threatens international democracy and sovereignty,” Blackburn said in a tweet. “Today’s meeting demonstrates China and Russia’s ongoing efforts to strengthen the New Axis of Evil at the expense of freedom around the globe.”

“The United States must continue to stand firmly against these malign actors and support the people of Taiwan and Ukraine.” 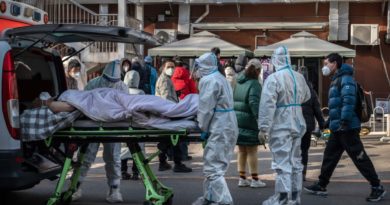