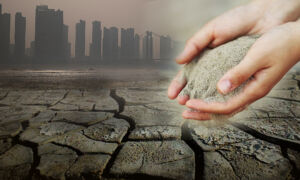 Wuhan, capital city of central China’s Hubei Province, is nicknamed the “City of Yangtze” because it is the biggest city in the middle reach of the Yangtze River and situated at the confluence of the Yangtze and Han Rivers, one of eight major tributaries. That explains why when a video showing a dried-up section of the Yangtze River in Wuhan was circulated on the Internet, people were shocked. They asked each other, “Is it real or fake news?” Wuhan is known for having abundant water.