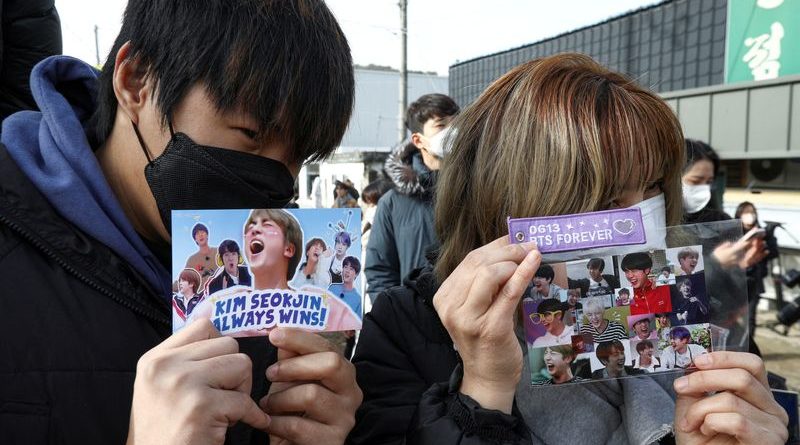 SEOUL (Reuters) – When Jin became the first member of the K-Pop supergroup BTS to enlist for South Korea’s mandatory military service this month, he had a special message to fans on Weverse, a fan platform app that commands more than 8 million active users.

The Weverse platform has proven a major weapon of the K-Pop group’s agency HYBE Co Ltd, offering fan-oriented experiences interacting with the stars, accessing unique content and buying merchandise, and is now expanding into subscription services and more.

“We are a fandom business,” Weverse President Joon Choi told Reuters. “There are bigger global services offering functions we offer, but Weverse’s users are superfans characterised by passionate engagement.”

Before Weverse launched in 2019 fans were scattered across multiple platforms, said Choi.

“They bought merch here, watched videos there, communicated elsewhere… We didn’t have a database of our customers. So we began developing each service in-house.”

The K-Pop industry has revolved around loyalty and personal identification with the stars, making it a “recession-proof” business – revenue is driven by public response to artists’ activities, and upselling is possible, analysts said.

However, HYBE is now uniquely positioned to harness such a loyal fandom to grow its global business through unit Weverse’s technological reach, offering a growth model for future entertainment, analysts said.

Around 170 out of 300 Weverse employees are engineers including programmers and UX specialists, Choi said, with veterans from gaming companies or local tech giant Naver with whom it has a partnership.

The app also currently has more than 80 teams of artists represented including BTS, and about 8-9 million monthly active users. It also has a high number of repeat visitors and retention – peak daily active users can number about 6 million.

Non-HYBE artists are also on the platform, including rival agency YG’s top girl group Blackpink, and it is expected to see the number of artists – and fandoms – grow to 100 soon.

More U.S. and Japanese artists are expected to join next year, said Choi but declined to reveal who.

“For example, we do commerce, but there is no seasonality… We have 80 teams of artists, and some of them are always doing something,” he said.

Like K-Pop’s popularity, the app is also global. Users are based in more than 200 countries and only about 10% of the app users speak Korean, Choi said. Top 5 countries Weverse users are from include Japan, Indonesia, Mexico, the United States and South Korea.

“There is no other entertainment agency with such a fan platform with enough users for economy of scale,” said Lee Hye-in, analyst at Yuanta Securities.

“Such a centralised platform was possible because in K-Pop, the agency holds the hegemony – whereas in the U.S. for example, the artists are the centre.”