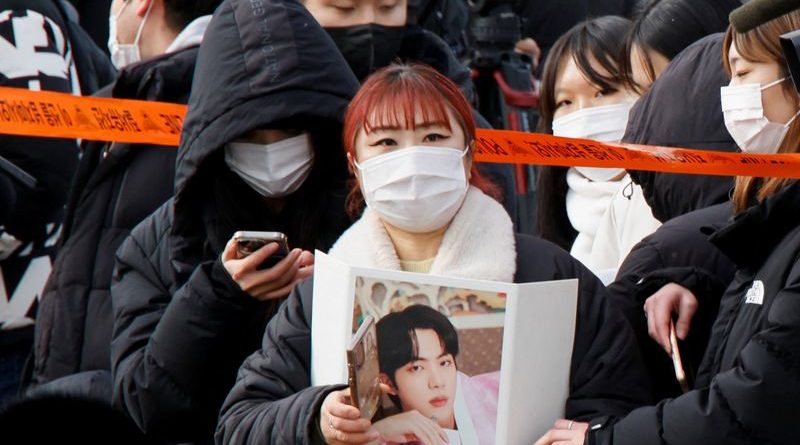 As some 300 military, police and fire officials tightened security around what will be his boot camp in the eastern county of Yeoncheon – where frontline troops are deployed on guard against North Korea – dozens of fans gathered to bid Jin farewell for now, braving freezing temperatures with snow forecast for the afternoon.

In October, BTS announced they would sign up for mandatory military service, starting with Jin. The group plans to pursue individual projects and reunite in 2025 after all seven members have completed their duties.

Jin, who turned 30 on Dec. 4, had postponed the start of his service for the maximum permissible time. After five weeks’ training at the boot camp, located about 45 kilometres (28 miles) from the heavily fortified Demilitarized Zone that separates the two Koreas, he will be deployed to a yet-to-be specified unit.

“Now it’s time for a curtain call,” Jin wrote on BTS fan platform Weverse early on Tuesday. He had posted a photo of his shaved head on Monday, joking that it was “cuter” than he had imagined.

BTS’ management, Big Hit Music, said there would be no official event and asked fans to refrain from travelling to the boot camp citing safety concerns and instead “cheer from hearts”.

South Korea requires all able-bodied men aged between 18 and 28 to serve in the military for about two years, a measure that has long been a source of controversy.

A 2019 revision of the law allowed globally recognised K-pop stars to delay service until the age of 30.

Some lawmakers had sought to shorten the term for those artists significantly, a perk enjoyed by Olympics and Asian Games medal winners as well as some classical musicians and dancers, but a bill to legislate for the change is still pending in parliament.