The winning ticket for the second largest jackpot in Mega Millions history is confirmed to have been purchased. After the results of Friday night’s lottery draw, reports came in of a winning ticket having been bought in a suburb of Chicago.

The winner has a choice of taking a lump sum payment that would total around $740 million or an annuity payment, which would pay the entire amount over a 30-year period. The winner has not come forward yet, but the ticket was confirmed to have been purchased at a gas station in Des Plaines.

“We had a total of little bit over $71 million in sales and roughly half of that will go towards paying all of the prizes associated with those tickets,” said Harold Mays, Director of Illinois Lottery. “And that’s roughly $26 million that will come back to Illinois to help fund schools, to the common school fund. So, it’s a significant sort of impact from that perspective.”

🤑 💰 🎉 Winner Alert: Mega Millions® players, check your ticket! A lucky winner won $1,280,000,000! If you purchased your ticket from Speedway in Des Plaines, IL, you could be the winner! https://t.co/AidZEHZGHc pic.twitter.com/Jus6gwQTMY 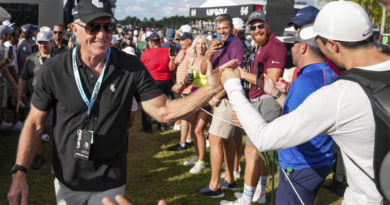 Greg Norman Could Be Replaced as LIV Golf CEO