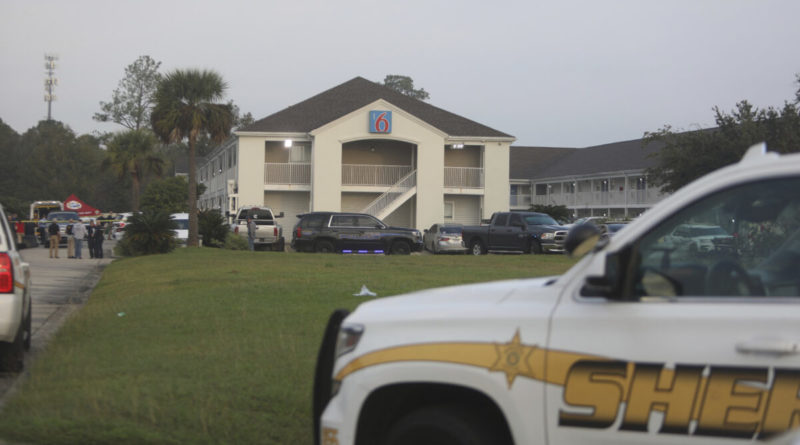 
BAY ST. LOUIS, Miss.—Two police officers in coastal Mississippi were shot and killed early Wednesday by a woman who they had talked to for nearly 30 minutes in a motel parking lot, authorities said. The woman also died.

Amy Anderson, 43, was sitting in a parked SUV with a female child when the officers were sent to the parking lot of a Motel 6 in Bay St. Louis around 4:30 a.m. on a welfare check, the Mississippi Department of Public Safety said in a statement.

Bay St. Louis Police Sgt. Steven Robin and officer Branden Estorffe spoke to Anderson for nearly a half-hour before she fired at them while sitting in the vehicle, investigators said. During the conversation, the officers called for Child Protection Services, the police statement said.

Additional officers who rushed to the scene found Anderson dead from a gunshot wound to the chest. An earlier statement said the woman shot herself. It was unclear what happened to the girl inside the SUV.

Investigators Wednesday blocked a large part of the motel parking lot with crime scene tape. An officer was seen taking photos of the driver’s seat of a SUV just a step away from bloodstains on the pavement and discarded emergency medical equipment. Other officers were looking inside a nearby police car.

The Mississippi governor offered condolences in a message on social media.

“I am heartbroken by this terrible loss of two brave law enforcement officers,” Gov. Tate Reeves posted on Twitter. “I am praying for their family, friends, their fellow officers, and the entire Bay St. Louis community.”

Can You Guess Which City Is the Year’s Top Tech Talent Market?

Floating Over Vistas in a Hang Glider