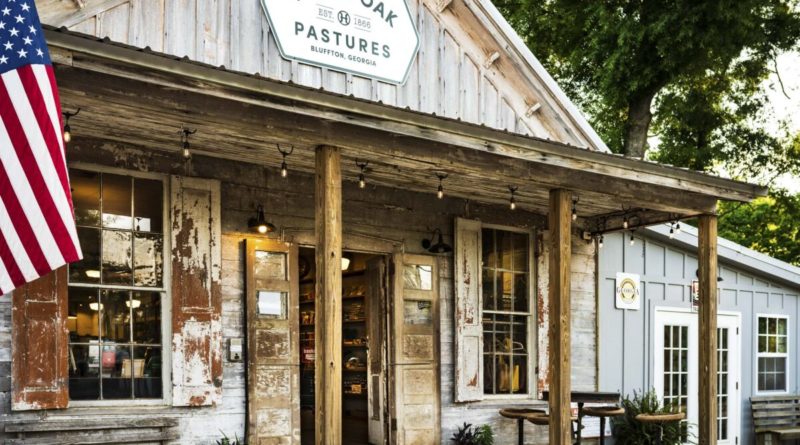 
“Waste not; want not”—the proverbial saying describes a mentality responsible for the explosive growth and popularity of White Oak Pastures in Bluffton, Georgia. Established in 1866 (just one year after the Civil War ended), White Oak remains with its founding family, the Harrises, and the current generations agree that the farm’s longevity is due to focusing not just on profits, but on the land, animals, and employees.

Jenni Harris, of the fifth generation of Harrises, handles marketing for White Oak Pastures. Growing up, she swore that she’d never permanently resided in rural Bluffton—where the town population lingers at 100 while the county (Clay) boasts around 3,000. She had an opportunity to work in Atlanta, but she moved back to Bluffton in 2010 after a stint in the big city because “what was happening at the farm was much more interesting than what was happening in the city,” she said.

White Oak underwent a radical transformation that got the whole county talking. Harris shared the hoopla by first explaining the farm’s history: her great-great-grandfather, James Edward Harris served in the Confederate cavalry and was a livestock and grain crops farmer. Before there was refrigeration and combustible engines, he processed farm livestock and sold the goods in Bluffton. The farm was industrialized after World War II by her grandfather Will Bell Harris, who died in 2000. “Farmers like him were experiencing the age of tractors, chemical fertilizer, efficiency in agriculture, etc. Farming was centralized, industrialized, and commoditized,” she said.

Enter Will Harris, Jenni Harris’s father. He took over the reins from his father and settled into the saddle, so to speak, for a while. Working beside his father, Will accepted the popular farming philosophy of quantity over quality, raising only cattle, using pesticides, herbicides, hormones, and antibiotics, and feeding the herd a high-carbohydrate diet of corn and soy.

But by the mid-1990s, Will became increasingly disenchanted with industrialized methods. “My father began to talk about a growing disgust with the commodities system,” said Jenni Harris. “He recognized that he did not only use the tools to make meat production profitable, he abused them in a way that showed the unintended consequences of industrial agricultures. There was no burning bush, but he told the family he wanted to change the farm—and our historical lack of farm involvement gave us no opinion on this change.”

Changing the farm involved the intrepid decision of returning to many of the same traditional farming methods practiced by the original Harris farmer 150 years earlier. As for Will in the present day, however, “the local community thought he was crazy,” said Harris. “They still think he’s crazy. We live in a primarily agricultural belt where farming involves a highly subsidized mono-cultural system—so what we decided to do was not common in this area.” The Harrises touted their “transition to a more responsible agriculture model” as a “bold return to giving a damn.”

Since the change, the Harrises have engaged in what they deem “radically traditional farming.” Today, the products offered by White Oak are no longer considered commodities but rather “artisan creations.” The farm is no longer operated as a mono-cultural factory—it’s a “living ecosystem.” Regenerative practices rebuild the soil’s organic matter and restore its degraded biodiversity, resulting in carbon drawdown and an improved water cycle for the area.

But it took baby steps to transition the modern farm to emulate a more traditional model, according to Harris. “We started off slow, and understood this would be a journey—not a destination. Nothing occurred overnight. We are still on a journey today, 25 years later. Changing back required a huge capital investment into new equipment and [slaughterhouse] structures so we could have full control over the way the meats are processed.”

White Oak’s changes have earned the farm recognition in Georgia and worldwide. Harris noted that the farm was designated as one of only a few global Savory Hubs by the Savory Institute, a nonprofit dedicated to promoting regenerative farming.

White Oak Pastures has become one of the county’s largest private employers, with more than 180 employees, and the farm now offers a retail store, getaway lodging, a restaurant, and tours. “To be a part of a system that creates so many jobs for our local community is really encouraging,” said Harris, who resides on the farm with her sister and parents. She is proud that the farm has revived the entire community. “Our farm has restored our rural ghost town back into a nice little destination, and that’s exciting for me and the other folks that are part of this food production system.”

A 30-plus-year writer-journalist, Deena C. Bouknight works from her Western North Carolina mountain cottage and has contributed articles on food culture, travel, people, and more to local, regional, national, and international publications. She has written three novels, including the only historical fiction about the East Coast’s worst earthquake. Her website is DeenaBouknightWriting.com