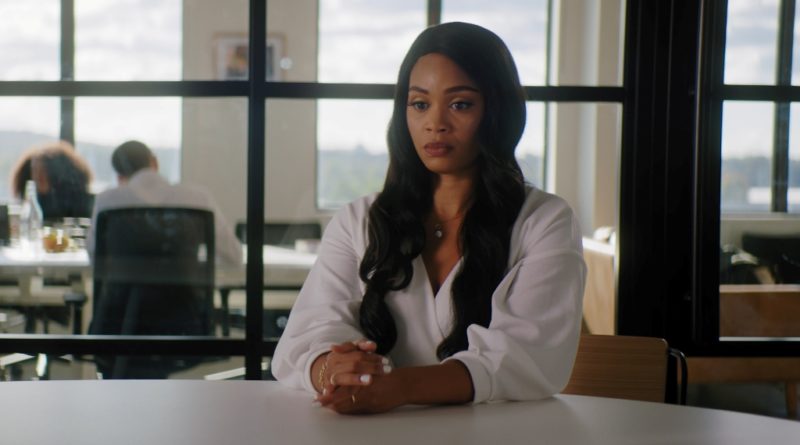 Based loosely on the eight-minute 2015 short film “Double Cross,” “The Pay Day” is a great example of why most short films aren’t adapted into features. Even at a scant 92 minutes, it feels stretched, padded, and overlong by more than half.

Both productions were directed by Sam Bradford and written by the two leads (Sam Benjamin and Kyla Frye) and it receives a bit of a legitimacy bump thanks to the inclusion of esteemed character actor Simon Callow (“Amadeus,” “Four Weddings & a Funeral,” “Shakespeare in Love”) in an extended cameo.

Also in a glorified cameo is veteran actress Ellen Thomas (the BBC TV show “EastEnders”) as Ms. Boomer, the unscrupulous owner of a London IT company who, when the movie opens, is in the process of firing IT specialist Jenn (Frye: think a fuller-figured version of Zoe Saldana). Although it is not made clear, it would appear Jenn is a subcontractor who has performed a lengthy, complicated, and successful job yet Boomer doesn’t want to pay her.

Based on what goes down, Jenn is quite good at what she does, but is petrified that she’ll be unable to land another job despite living in one of most IT-heavy cities in the entire world.

Not long after pity parties with friends and family, Jenn receives a cryptic call from Gates (Callow, turning in a spectacular Ian McKellen imitation) who offers Jenn $5 million for single day of work doing what she does best.

After listening to the job description by Gates and although semi-desperate for work, Jenn turns him down, as what he wants her to do is highly illegal. Gates then brings up a few of Jenn’s past dubious deeds that would likely lead to certain arrest and prosecution, effectively blackmailing her. Jenn reluctantly takes the gig. It’s 10 minutes in and we’ve now reached the movie’s narrative high-water mark.

In the first of several impossible-to-swallow plot points, Jenn enters a highly secured facility and, according to Gates, she will be able to gain entry by flirting with an easy-to-charm male receptionist. Said receptionist isn’t working that day and his replacement is a brittle and inflexible female who isn’t buying what the overly flattering Jenn is selling. Strike one.

What to Do Now?

Thinking on her feet, Jenn then decides the best way to gaining entry is by pretending she’s a cleaning woman and does so through a rear service entrance. Getting past the guard is relatively easy as he’s consumed with wolfing down what appears to be a box of deep-fried shrimp while barely noticing a custodian wearing four-inch, pointed-toe, cruel-shoe pumps. Strike two.

Jenn goes to the proper floor, only to be challenged by another employee stating that the cleaning staff is prohibited in that area. Without ever making eye contact with him, Jenn retorts by mumbling some nebulous, incoherent gibberish and he buys it whole, thus allowing her entry into an ultra-secure area. Strike three.

While hacking into the generic company’s security system, Jenn is interrupted by a guy alternately referred to as John or George (but not Paul or Ringo), played by Benjamin (think younger versions of Ed Burns or Vinnie Jones with hair and an alternating Liverpool/Scottish accent). Oozing equal amounts of smarm, charm, and mild menace, John/George is not the CEO he claims to be and, although it’s obvious he knows Jenn is up to no good, he leaves her alone while taking a rooftop smoke break. Strikes three, four, five, and six.

If you think you’ve been given too much plot, trust me, you haven’t. There’s still AN HOUR left to go and not a lick of it makes any sense whatsoever.

The Only Good News

To Bradford’s credit, he pulls off a decent technical aping of some Steven Soderbergh films; particularly “Out of Sight,” “The Limey,” and the “Ocean’s Eleven” franchise. He deflects the wanting screenplay with some interesting (but not original) split-screen, pan-and-scan camera work. From a visual perspective, the movie looks as luxurious and sexy as it tries to be.

The only true triumph here is the sinewy score by Daisy Coole and Tom Nettleship (credited as “Two Twenty Two”), a funk-jazz-ambient hybrid that is laced throughout, and goes far in taking our collective attention away from the go-nowhere story. Right now, it gets my vote for best original score of the year.

This movie is only recommendable to dedicated score aficionados and aspiring film composers. Two of the film’s assigned 2.5 stars are solely because of the hypnotic original music.

Originally from Washington, D.C., Michael Clark has provided film content to over 30 print and online media outlets. He co-founded the Atlanta Film Critics Circle in 2017 and is a weekly contributor to the Shannon Burke Show on FloridaManRadio.com. Since 1995, Mr. Clark has written over 4,000 movie reviews and film-related articles. He favors dark comedy, thrillers, and documentaries.