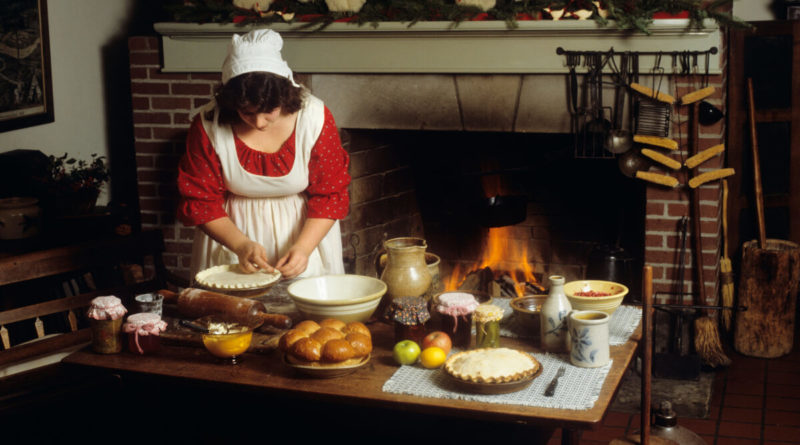 
There’s no place like home for the holidays—except perhaps Colonial Williamsburg. Here, the air smells like gingerbread, the clip-clopping of horse hooves travels up and down the lane as they pull carriages, and the a cappella voices of a choir sing Christmas carols on the street corner.

Christmas is a feast for all the senses, and Colonial Williamsburg jumps in with both feet to celebrate the season.

“On our yearly calendar we have five seasons,” said Nathan Ryalls, the manager of guest experiences at Colonial Williamsburg. “Spring, summer, fall, winter, and holiday.”

The Christmas season, which runs from Thanksgiving to New Year’s Day, turns the world’s largest living history museum into an 18th-century wonderland, where visitors can both learn about the past and soak up the best of the holiday season.

The Christmas decorations are not typical: There are hardly any Christmas trees inside the homes, apart from the one in the Rockefeller house. The wreaths, crafted by hand, tell stories about what was important to the residents of this town—for example, the weaver’s wreath is decorated with old wooden spools, and the tavern’s wreath is adorned with drinking mugs. All the materials that go into the wreaths have to have been available in the 18th century.

It’s nearly impossible not to be filled with the holiday spirit while walking down Duke of Gloucester Street, past the markets that sell tiny dolls and wooden drumsticks that would make for perfect children’s gifts. As we sipped hot chocolate and wandered through the cooks’ gardens, we listened to interpreters talk about mouth-watering Christmas dishes.

“Minced pies, of course, and roasted duck,” one interpreter said to my father-in-law. “Fowl, pheasant, and black pudding.” Christmas in Colonial Williamsburg was never a one-day event, but rather a season filled with food, festivities, and games.

“We offer a ton of experiences focused on Christmas,” Ryalls said. “We offer programs that look at Christmas and the Constitution. We have James Madison and Alexander Hamilton discuss the writing of the Federalist Papers.”

At the Governor’s Palace, a large wreath adorned the entryway arch, and candles were set behind every window to cast a warm, welcoming glow over the palace green. Inside, preparations for the Christmas Ball were well underway, and the whole palace was alive with activity. As we walked from vast room to room, we discovered that the Christmas season was also wedding season.

However, a visit to the tailor informed me that I was woefully underdressed for any kind of wedding or Christmas Ball.

“Who’s your designer, then?” the tailor in the shop on Duke of Gloucester street asked me, raising his eyebrows at my choice of attire: blue jeans and a sweater.

“A tailor was equivalent to a modern day hairdresser,” he told me as he sat cross-legged on a bench, stitching together a piece of fabric. “Once you found one you liked, you never left.” And just like that, history was made relevant again to me in a way it hadn’t been a moment before.

I visited Colonial Williamsburg for the first time the December after I graduated from college, and I remember being completely enchanted by sounds and smells. From the fifers and drummers marching down the street in uniform, to the handmade wreaths that hang in the doorways of colonial homes, garnished with oranges, pineapple, cinnamon sticks, and pine, Williamsburg seemed to completely envelop my senses. I was fascinated by this little town from the 18th century and the way it still seemed more alive than ever.

Several years later, we returned to Williamsburg with our 1-year-old daughter in tow, and she seemed equally mesmerized. She was an enthusiastic partaker of R. Charleton’s Coffeehouse’s hot chocolate, and as we stood wrapped in coats on the Palace Green to watch the Grand Illumination, she said her first word as the interpreters walked by holding torches: “Hot.”

I have long marveled and wondered at this town’s ability to truly create an experience for everyone: children, adults, history lovers, and novices alike. How does the nation’s largest living history museum make the past come alive in such a consistent and cohesive way from the moment guests walk through the visitor center’s doors?

A Historic Site With a Heartbeat

The museum consists of more than 300 acres, featuring iconic buildings like the Raleigh Tavern, the Wythe House, the Governor’s Palace, and the Capitol, which was the meeting place of the House of Burgesses. Williamsburg, originally established in the late 1600s, was one of the country’s first planned cities. Restoration of the city has involved extensive research and is continuing to evolve.

“We are constantly learning about this community,” said Ryalls. “This summer, we had three or four archeological digs happening across the campus.” Recently, Colonial Williamsburg partnered with the First Baptist Church of Williamsburg to locate and excavate the remains of the church’s original site on Nassau street.

The church was one of the earliest African American congregations. In August, they began excavating three burials, and they are currently knee deep on a journey to discover more about who these people were and the lives they lived.

“This is what sets Colonial Williamsburg apart from other institutions,” said Ryalls. “We are not just one building. We are an entire community. And we want to recreate that community: the spirit of that community.”

To do this, the museum hires interpreters to bridge the gap between the colonial community and the 21st-century visitor. Interpreters include tradespeople, tour guides, and actor interpreters. Interpreters are there to master their trades, learn and research their subject or person, and engage with guests in a way that helps them engage with the past.

Colonial Williamsburg works hard to make sure that there are no “dividing lines” during a visit, meaning that the interpreters and the hospitality staff at the taverns are on the same page to give a seamless experience.

And here, it seems, lies the secret of Colonial Williamsburg’s attention-retaining power: The people and the historic sites are not composites. They are based on real people from a historic record, in real places that have been recreated to scale and with full integrity. The tailor is not acting—he is a real tradesman, at work in his shop. At the brickyard, the ovens aren’t being fired up for show—the bricks they are baking are prepared for real use in Williamsburg.

As a guest, you can almost believe that the Governor is going to return from his travels with his wife and seventh baby at any moment. You can almost imagine yourself dressed for the Christmas Ball. It truly is history come to life.

“When people hear the word ‘history,’ they think of it as a stale subject—history is done,” said Ryalls. “But history is an exciting field because there are always new discoveries—new questions we can propose, new lessons the past can teach us.”

I think of the texture of the fabrics in the dressmaker store, the way the hot chocolate tasted at R. Charleton’s Coffeehouse, and the smell of gunpowder coming from the magazine. At Colonial Williamsburg, history truly comes alive.

Rachael Dymski is an author, florist, and mom to two little girls. She’s currently writing a novel about the German occupation of the Channel Islands and blogs on her website, RachaelDymski.com

Boy Born Without a Brain Gets Healed, Inspires Others Toward Faith