In Western medicine, acne is considered a skin condition where the pores of the skin become blocked by hair, sebum, bacteria, and dead skin cells.

Traditional Chinese medicine looks deeper at the root cause of the skin condition: an experienced Chinese traditional medicine practitioner can identify the underlying internal organ issues by looking at the location of the acne. 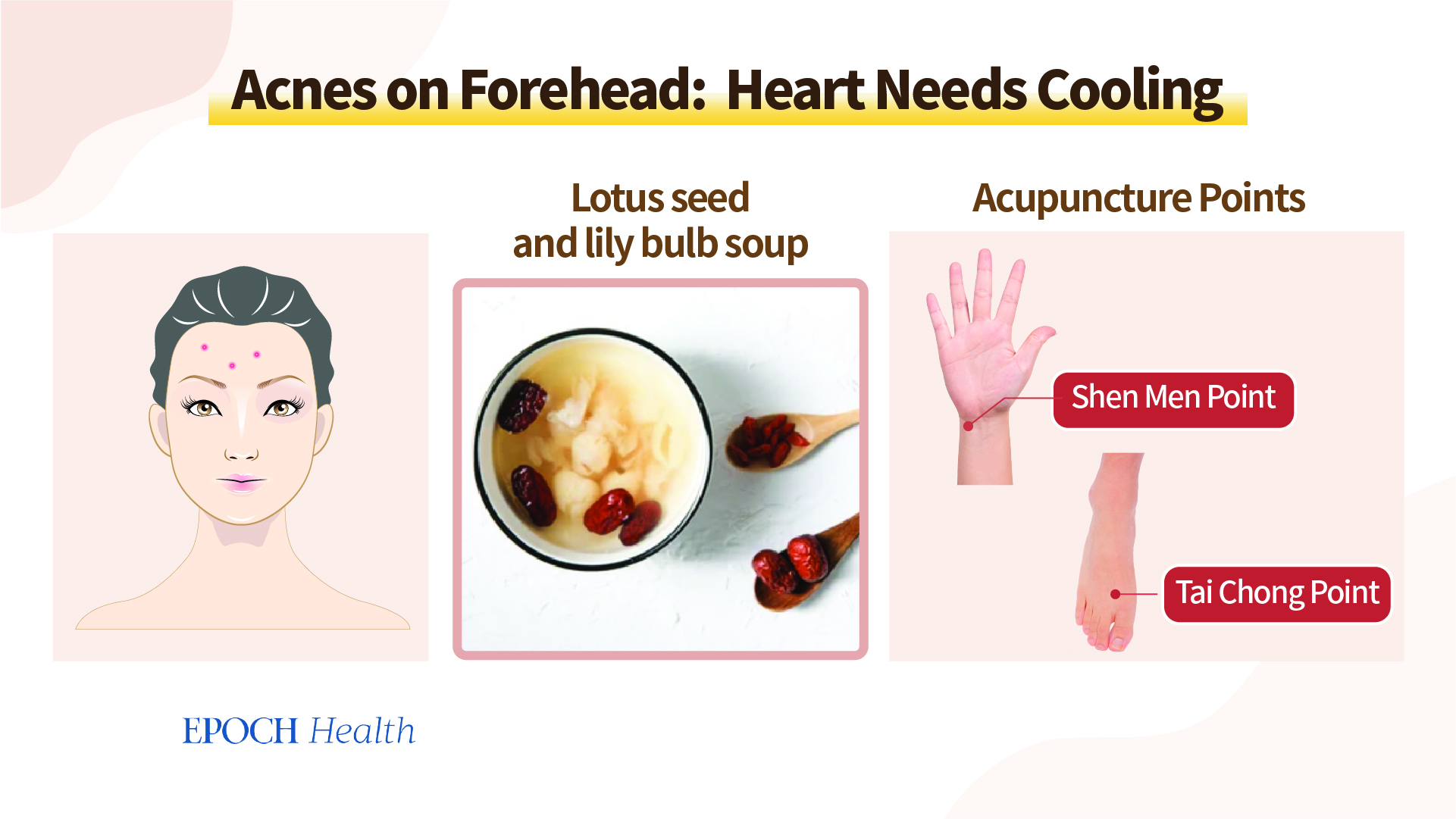 If you get acne on your forehead, in traditional Chinese medicine, it could be a sign of the heart “having too much heat,” which is due to stress or lack of sleep. Usually, when someone is stressed and can’t sleep at night, acne could show up on their forehead.

Therefore, from the traditional Chinese medicine’s point of view, one would focus on “cooling the heart” to remove acne on the forehead. Relieving stress, adjusting sleep schedule, and staying hydrated are highly recommended.

Lotus seed and lily bulb soup: Place a handful of lotus seeds, lily bulbs, and dried jujubes in enough water to cover the ingredients, bring the water to boil, then simmer for 40 minutes.

The soup can cool the heart, strengthen the yin in the heart, and eliminate the acne on the forehead.

There are two acupuncture points that can be helpful in getting rid of acne on the forehead: the Shen Men point on the wrist and Tai Chong point on the foot. Massaging these points can calm the heart and unblock the liver. 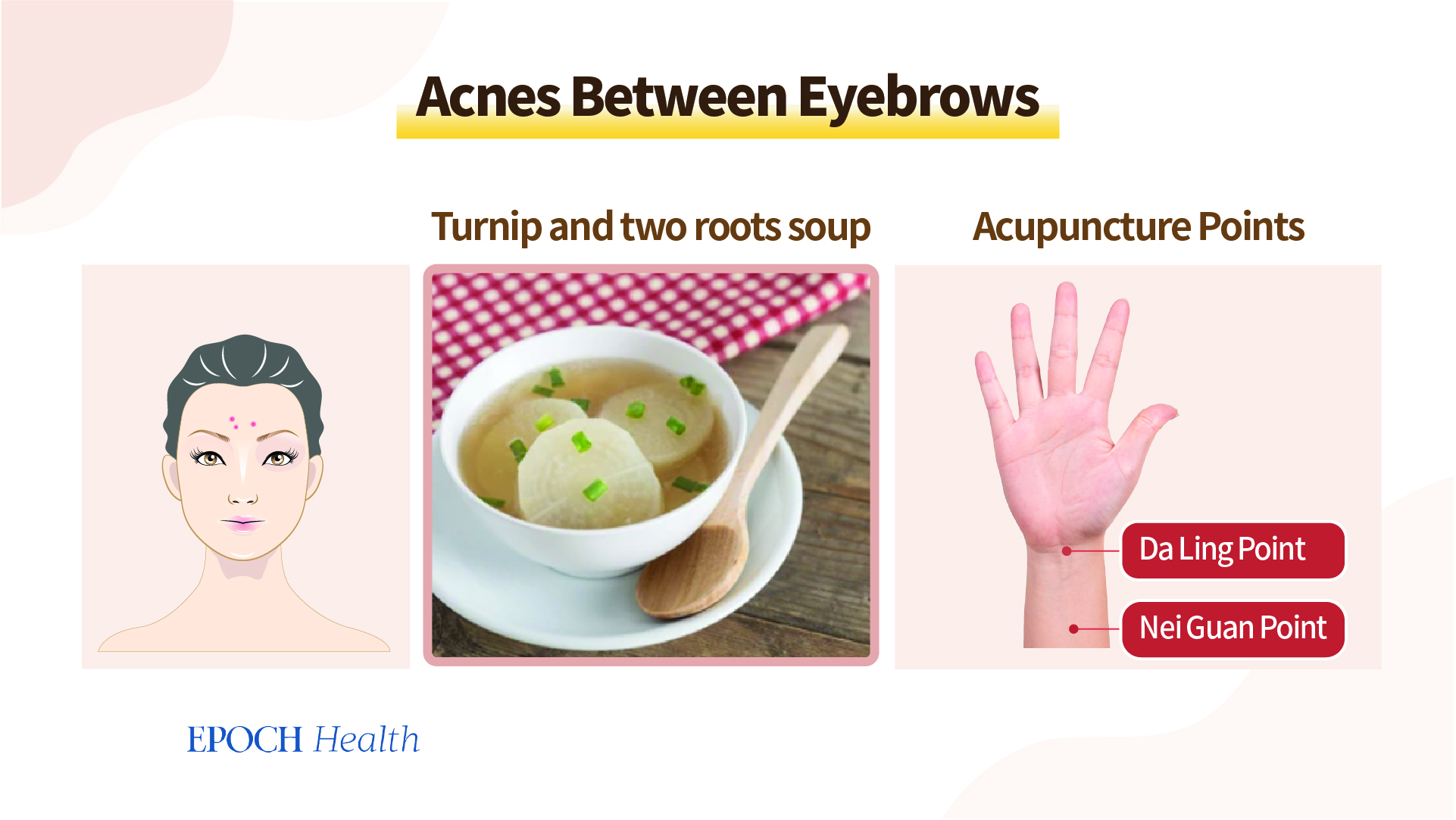 If the acne appears in between the eyebrows, it might have something to do with the heart and lungs. Other symptoms such as heart palpitations and chest tightness might accompany this, or one may find breathing difficult when running. This could be caused by a sedentary lifestyle.

If one does not exercise much, one should not eat salty or heavily seasoned preserved foods, to prevent the body from bloating and to lighten the burden of the heart.

Massaging the Da Ling point and Nei Guan point on the wrist can have a calming effect.

Foods that help people sleep, help nourish the heart and lungs can target the root problem and eliminate the acne between the eyebrows. These include ophiopogon root tuber (maimendong), Chinese asparagus roots (tianmendong), American ginseng, and lotus seeds.

Then add your favorite stock, white turnip, 15 dried jujubes, 10 lotus seeds, and the broth into the pot. Put the pot lid on and simmer. Add a little salt before serving.

Acne on and Beneath the Nose: Spleen and Stomach Need Tonification 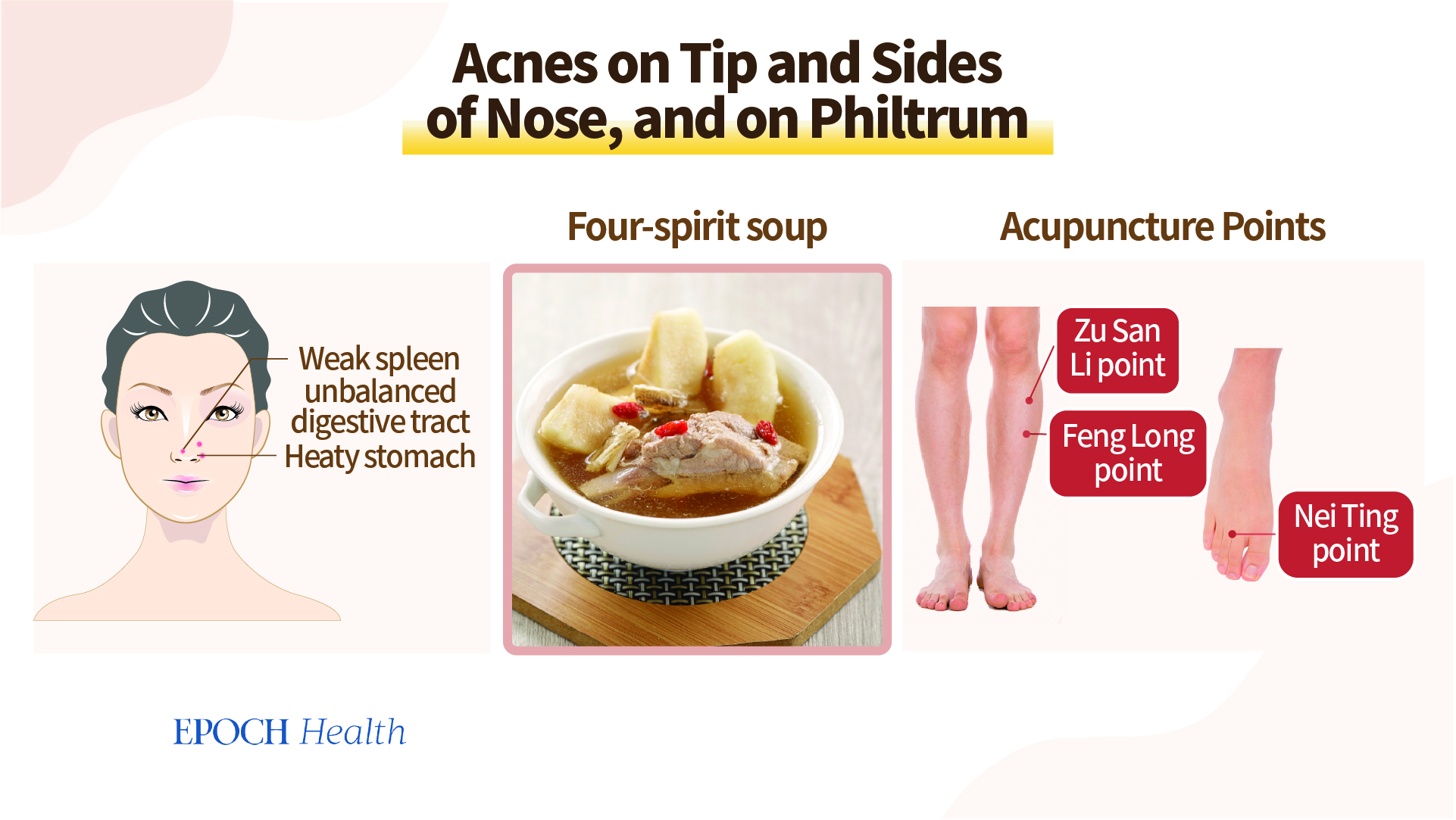 Traditional Chinese medicine believes that the tip of the nose corresponds to the spleen, while the sides of the nose correspond to the stomach. So if blackheads and pimples show up on the nose, it might be because of the excessive consumption of nuts, fried or BBQ’d foods, and/or spicy foods. These foods put a heavy burden on the spleen and stomach and can cause acne on the nose.

Those with acne on the nose could also suffer from bloating, sour regurgitation, and difficulty with bowel movements. All of these symptoms are caused by the digestive tract having excessive “dampness and heat.”

A traditional recipe called “four spirit soup” can nourish the digestive tract. Parents commonly use it to increase a child’s appetite and improve digestion. 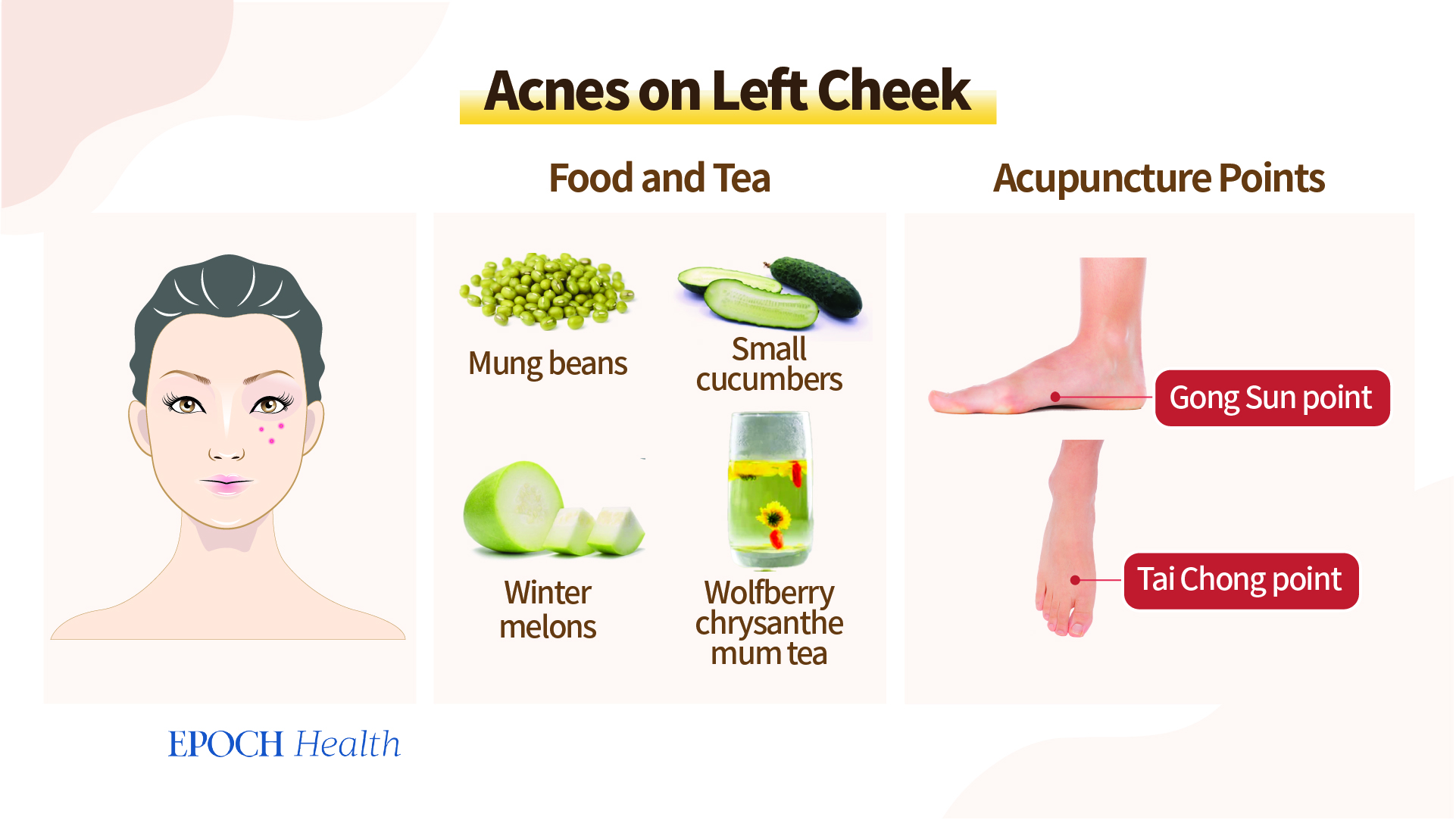 When looking at the cheeks, there is a saying in traditional Chinese medicine: “Left liver; right lung.” So acne on the left cheek might be related to the liver.

Staying up late at night and alcohol intake can cause liver malfunction, and the symptoms can show up on the left cheek.

According to traditional Chinese medicine, to treat acne on the left cheek, one can massage Gong Sun point and Tai Chong point.

Foods that can cool the liver are mung beans, small cucumbers, and winter melons.

Wolfberry chrysanthemum tea is also very effective. Wolfberries (goji berries) can nourish the liver and moisten the lungs. Chrysanthemum flowers can cleanse the liver, brighten the eyes, and strengthen the gallbladder. 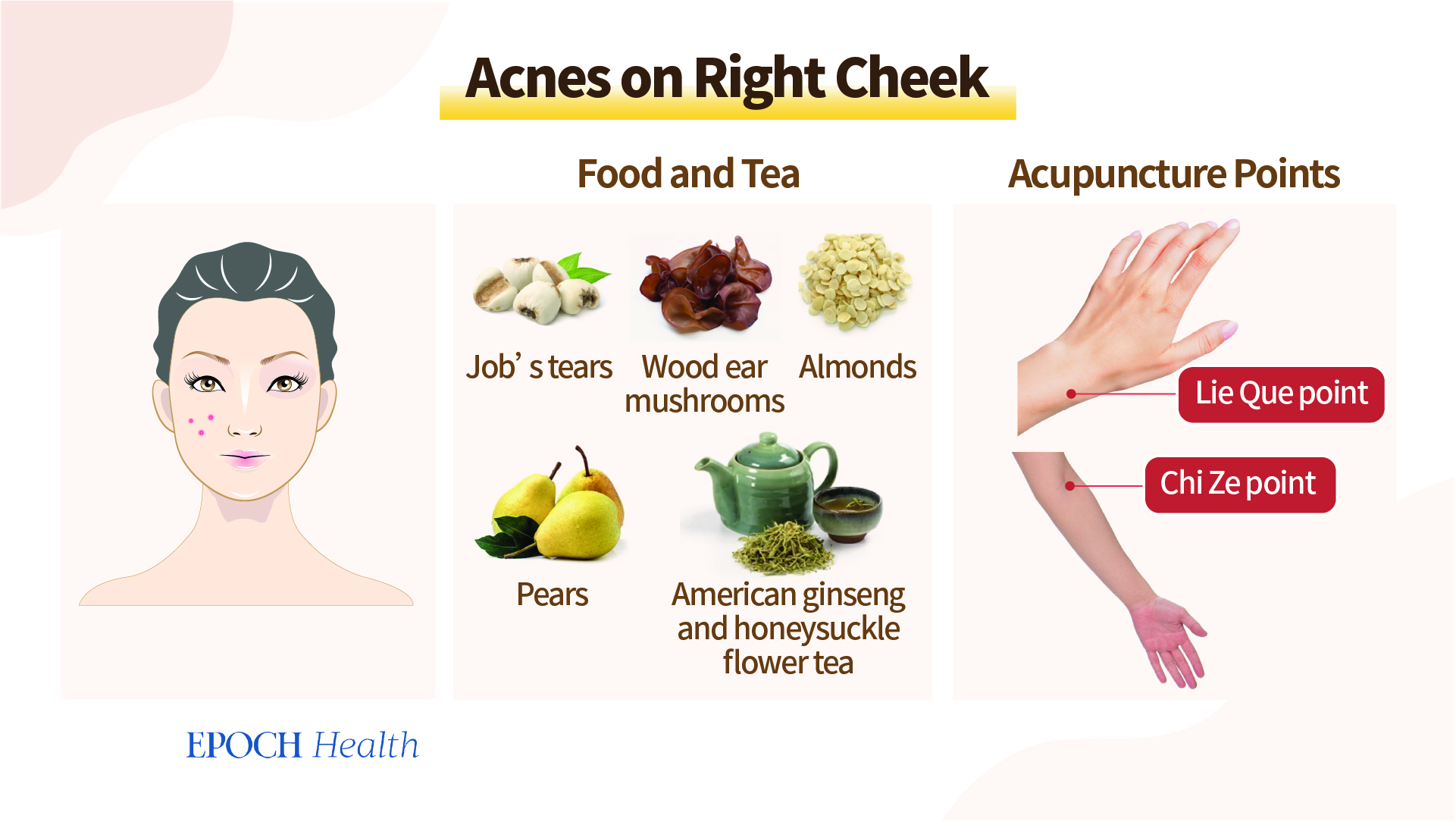 Many people with allergic rhinitis have acne on their right cheek. This is because their lungs have too much “heat” or other imbalance.

Massaging the Lie Que point and Chi Ze point can help cool down and moisten the lungs, so as to remove acne on the right cheek.

Foods that are beneficial to the lungs are Job’s tears, wood ear mushrooms, almonds, and pears. They can thus improve the acne.

Honeysuckle flowers can reduce heat and inhibit the action of germs. American ginseng can replenish the energy in the lungs. This tea can moisten the lungs and is also very tasty.

Acne Around the Temples 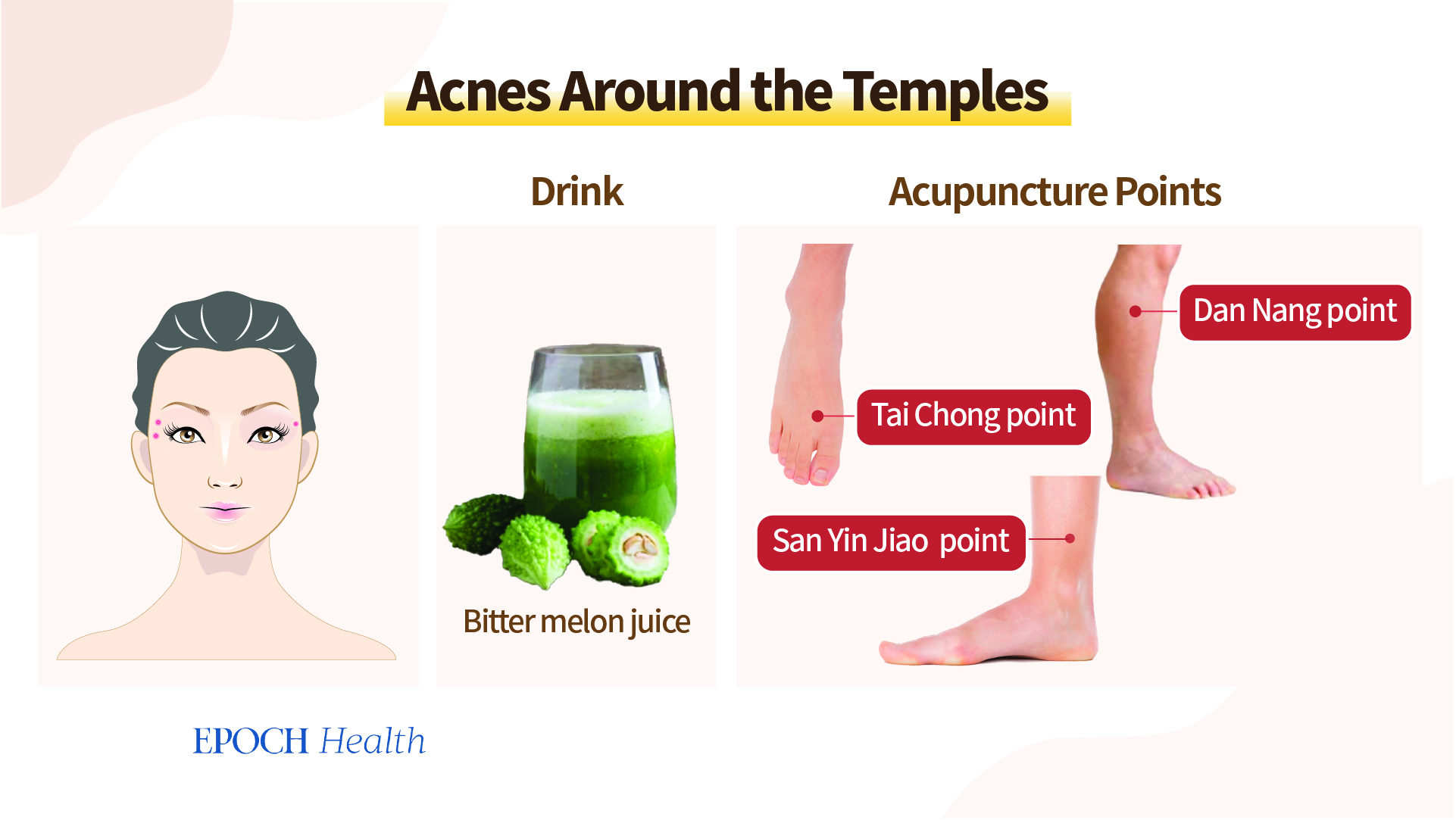 The temples are related to the gallbladder. If one has acne around their temples, maybe this person has an irregular meal schedule, and they often skip meals, or just have one larger meal per day.

Acne Around the Mouth 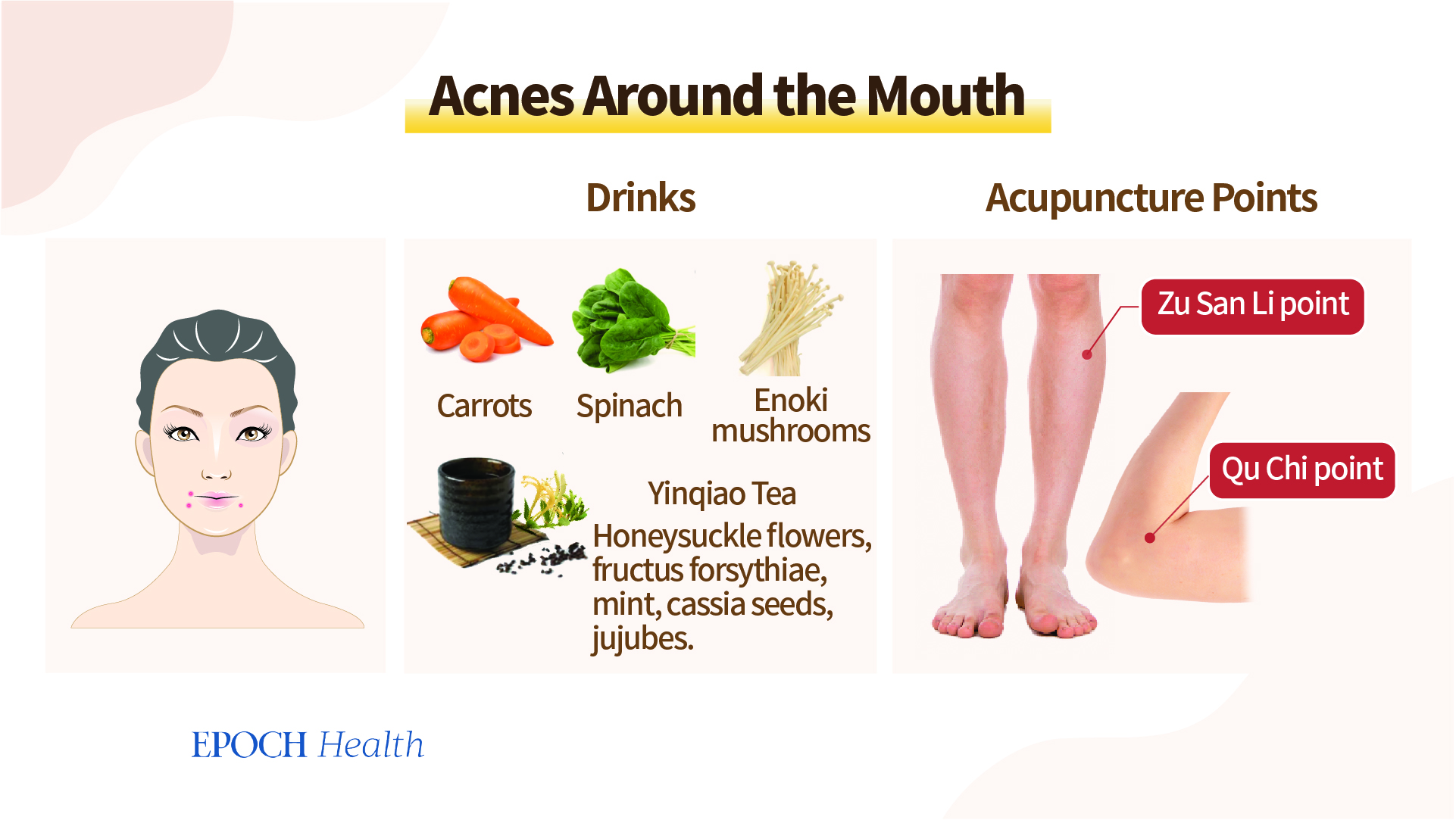 Acne around the mouth might occur if someone eats too much spicy food, too much meat, and an insufficient amount of vegetables. These people should eat more foods that are high in fiber.

People with acne around their mouth can drink a type of tea called Yin Qiao, which consists of honeysuckle flowers, fructus forsythiae (lianqiao), mint, cassia seeds, and jujubes.

The cassia seeds must be fried before consumption. They can help reduce the edema caused by eating heavy and salty/spicy foods. Honeysuckle flowers and fructus forsythiae can clear fever and heat. Mint can regulate digestive functions. 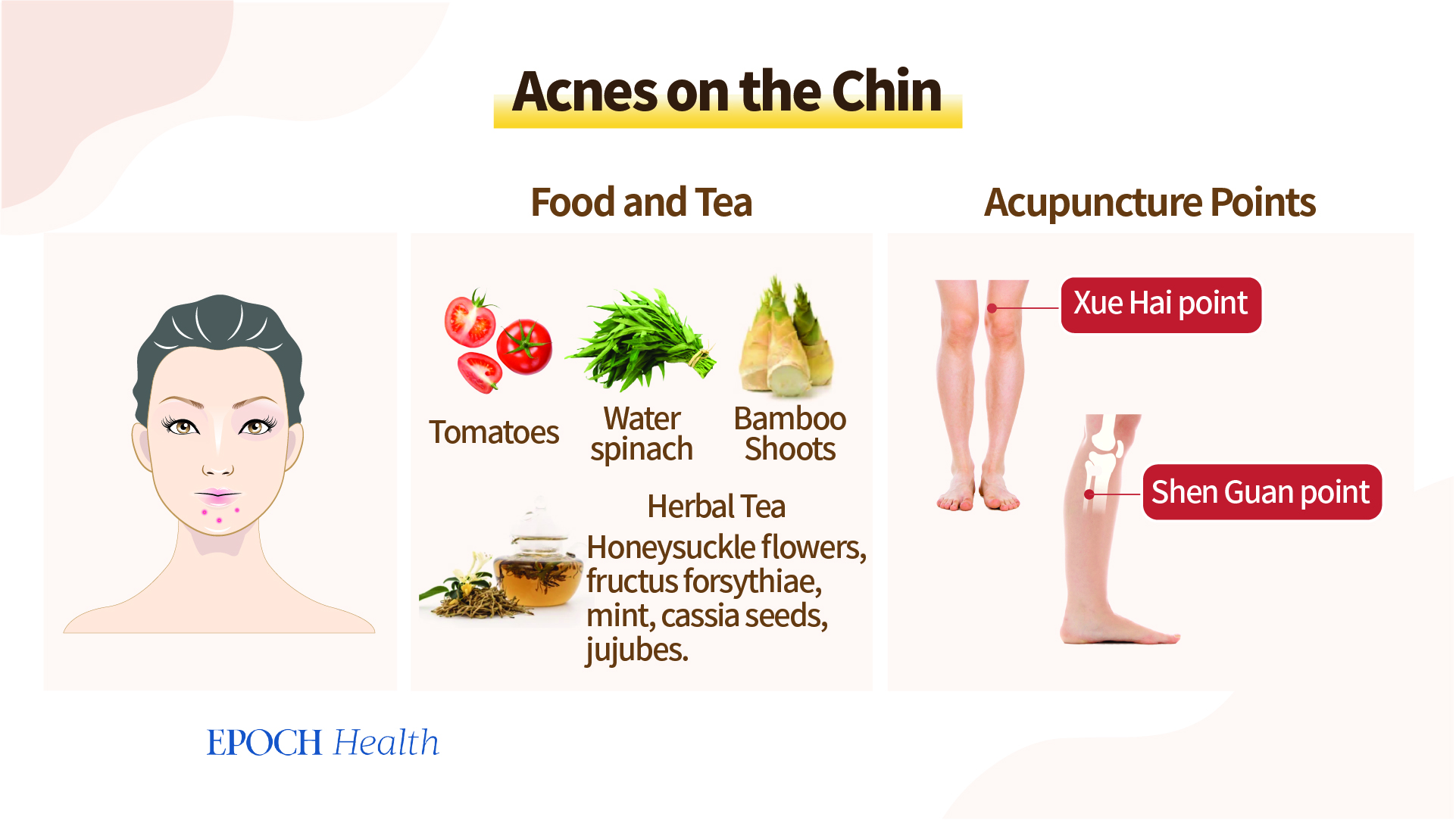 Speaking from his clinical experience, Dr. Dawei Guo, president of the Fu Yuan Chinese Medicine Clinic in Taiwan, said that 80 percent of those who have acne on the chin enjoy eating overly spicy food.

He recommends they eat water spinach and bamboo shoots to encourage intestinal motility and clear the residual feces in the intestines. Men can also eat a lot of tomatoes, which are beneficial for their lower urinary tract.

They can also drink tea made from honeysuckle flowers, fructus forsythiae, mint, cassia seeds, and jujubes.